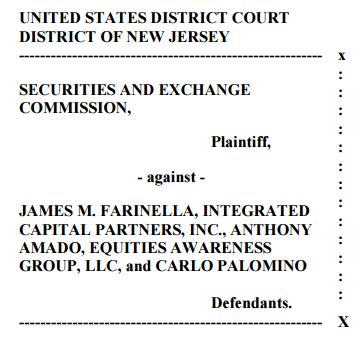 The SEC has filed fraud charges related to a cannabis penny stock for the second time in less than a week. Last week, it announced a civil case against CV Sciences (formerly CannaVest) and its CEO, Michael Mona, Jr. Today, the government agency announced fraud charges against James Farinella of Integrated Capital Partners (ICPI) and Anthony Amado and Carlo Palomino of Equities Awareness Group (EAG) as well as both ICPI and EAG. The agency has also filed criminal charges against Farinella.

The SEC alleges that Farinella paid EAG to promote the Pazoo (OTC: PZOO), enabling him to reap gains of over $1mm in 2012, before the company made its transition into the cannabis industry. The full complaint details a multi-phased scheme in which Farinella installed an associate as CEO (David Cunic, whom the SEC described as “Individual A, a physical therapist with no known experience managing a public company”). The company had gone public through the S-1 process, and Farinella controlled approximately 98% of the unrestricted common stock, according to the SEC. In the second phase, the group allegedly manipulated trading in the stock to create an appearance of an active trading market. Ultimately, the stock was promoted by EAG and the company itself through press releases (at least 20!), enabling Farinella to pocket over $1.1mm on the sale of over 8mm shares through the end of 2012, with EAG receiving $820K. The SEC’s complaint shows how the stock moved up and then down during the alleged activity:

Farinella continued to milk Pazoo for his personal gains after his alleged pump and dump activity, as I described in 2015 (De Facto Insider James Farinella of Integrated Capital Partners Appears to Secretly Pump Pazoo While Dumping Shares). I detailed his history as a stock promoter and how he sold millions of shares of PZOO while claiming publicly to be a buyer. Pazoo, not surprisingly, was a total disaster for anyone who invested in the company, which was struggling to enter the cannabis lab testing business. It conducted two reverse splits in the last fifteen months, including 1-100 in March 2016 and 1-250 in April 2017. This means that the current price of $0.0035 is the equivalent to $0.00000014 in 2012, when Farinella was allegedly pumping and dumping the stock. Stated differently, 25,000 shares in 2012 at a peak price of $0.40 have gone down in value from $10,000 to about 1/3 of a penny.

Investors should be wary of James Farinella, who currently serves as CEO of publicly-traded Michael James Enterprises (OTC: MJTV). While this sounds like a cannabis company, it is not, as the company is focused on female sexual arousal products. The company had no revenue and total assets of only $8070 as of 3/31, owing over $1mm.