Alan Brochstein here! Cannabis stocks finally rallied this week slightly. Since we shared our sector bullishness in this newsletter a few weeks ago, the Global Cannabis Stock Index has actually dropped a lot. The index is up nearly 4% from the multi-year closing low set during this week, and, at 16.34, it is down about 15% in June and has fallen by over 50% in 2022. With little chance of recovering the June loss in the next four days, it appears that this will be the 18th consecutive monthly decline. We will soon detail the performance for the month of all seven of our indexes.

This weekend in a video for subscribers at 420 Investor, I described how a lot of the stocks I follow are testing or have taken out the lows from March of 2020. Since then, the S&P 500 is up about 77%. Simply put, the cannabis sector has been absolutely hammered. We have shared in the past our reasons for being bullish: the expansion of many state markets into adult-use, the addition of new dispensaries in Illinois and very low valuations in our view.

We always try to understand the sentiment in the cannabis sector. Right now, sentiment is generally negative, which encourages us as contrarians. When we look at the stocks and the sub-sectors, we see a very oversold market. The Global Cannabis Stock Index made a new 52-week closing low this week at 15.76 on Wednesday. For perspective, we think it’s important to remember that the closing low in March 2020 was slightly higher than our close Friday (16.42 then, 16.32 now). It’s a near double-bottom! 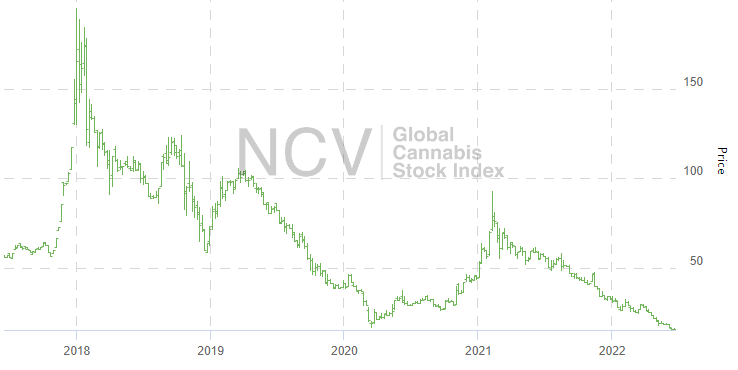 The American Cannabis Operators Index is down a bit less than the overall market, having declined by nearly 47% in 2022, while the Ancillary Cannabis Index has fallen by more (53.8%). While the overall Canadian market has declined about the same as the overall market, the largest ones have been sold aggressively. Canadian Cannabis LP Tier 1 Index, which consists of five companies doing more than $30 million in quarterly revenue, has declined more than 56% and trades well below the 2020 low now. Aurora Cannabis, Canopy Growth, HEXO Corp. and Organigram have made recent lows below the 2020 lows, while Tilray still holds above its 2020 low.

When looking at the prices, there are two factors that we like to assess: oversold and overextended. The way we measure oversold is by comparing to the 150-day moving average, and the 29 stocks on the 420 Investor Focus List are anywhere from 13% to 76% below that level currently. The average is 43% below. This is quite oversold in our view. When looking at a chart, we define a trend as overextended when the 10-dma has been below the 50-dma and the 50-dma below the 150-dma for more than 13 weeks. The stocks are for the most part overextended to the downside, with several names reaching that point in mid-July.

Cannabis stocks being oversold and overextended to the downside sets us up for at least a bounce if the rally we expect doesn’t materialize. Cannabis stocks are very out of favor now, and we continue to believe that this is a good time for investors to increase their exposure.

Lowell Farms recently reported in its Q1 financials that for the second quarter in a row, it is California’s largest combined seller of packaged flower and all-flower pre-rolls per data provider Headset. Lowell Farms is an innovator in cannabis cultivation and maker of the legendary brand Lowell Smokes.

Chairman of the Board George Allen recently said, “To compete with the black market, we have to do it with price, quality, safety, and partnership with governing bodies that control our industry. We need three things: good quality cannabis, a brand that people trust, and automation. We are on the right path to having all three.” 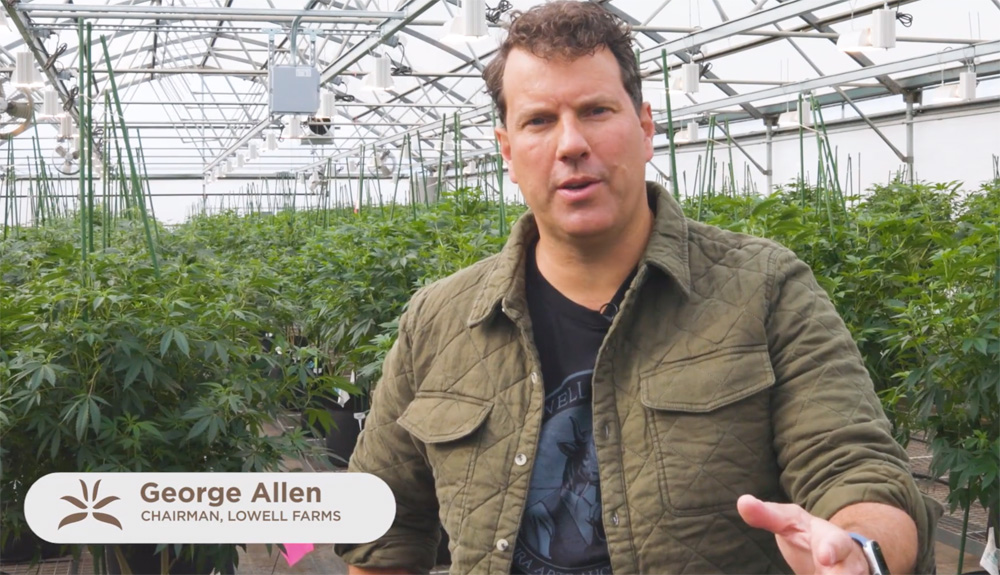 Get up to speed by visiting the Lowell Farms Investor Dashboard that we maintain on their behalf as a client of New Cannabis Ventures. Click the blue Follow Company button in order to stay up to date with their progress.

TerrAscend continues to focus on New Jersey, Pennsylvania and Maryland, three key markets that are moving forward with adult-use cannabis sales. Sales in New Jersey began in April. Pennsylvania and Maryland are expected to make that transition within the next 18 to 24 months. In an exclusive interview, TerrAscend Chairman Jason Wild and President and COO Ziad Ghanem discuss the company’s strategy to go deep and not wide.

GABY, a retail focused cannabis company, has spent the last year building its leadership team and streamlining operations. With the addition of a new president, CFO and director of retail operations, the company has cut costs and developed standardized operating procedures to help it move forward. In an exclusive interview, Founder, Chair and CEO Margot Micallef said the company plans to focus on opportunities only in California.

Rhode Island is expected to begin selling adult-use marijuana by the end of the year. The Ocean State became the nineteenth state to legalize its use on May 25. The new law allows for 24 new retail licenses to be issued in six geographic areas. In this article we discuss the current public companies with operations in the state.

Greenlane Holdings has high hopes for its financial future. In updating its strategic plan to accelerate its path to profitability, the company said it believes it can generate more than $30 million in liquidity by the end of the year if it is successful in achieving its goals.

Sundial Growers announced that it has entered into a purchase agreement via a stalking horse bid with Zenabis Group. A subsidiary of Quebec-licensed cannabis producer HEXO, Zenabis filed for bankruptcy protection in Canada to restructure business. HEXO purchased Zenabis just a year ago for C$235 million in stock. The bid agreement is subject to court approval as well as other potential bids. The assets covered by the agreement include the 380,000-square-foot indoor growing facility located in Atholville, New Brunswick, as well as the acquisition of a decommissioned 255,000-square-foot indoor facility in Stellarton, Nova Scotia, that was used as a packaging, processing and value-added cannabis product manufacturing facility.

iAnthus Capital Holdings completed its previously announced recapitalization transaction, which resulted in changes to the company’s corporate governance and capital structure. Among those changes, Michael Muldowney and Diane Ellis resigned from the company’s board of directors. Several new board members have been named. The company has faced numerous challenges in recent months including the resignation of its co-founder Randy Maslow.