We pointed to a remarkable change in the cannabis sector in early November, a week after Constellation Brands (NYSE: STZ) announced a significant investment into Canadian licensed producer Canopy Growth (TSX: WEED) (OTC: TWMJF). At the time, the Cannabis Stock Index had lifted off of a late-October low of 56.85, rising 5.6% over the week following the announcement. Since then, the market has posted another seven weekly gains, powering ahead to 130.66 as of 12/26, a gain of 129.8% since October 27th. 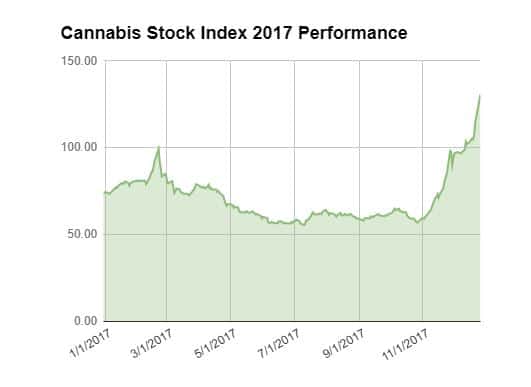 The rally accelerated in mid-December, with volumes picking up as the stocks cleared their 2017 highs set in February, and traders stepping up bets in advance of California legalizing. I have discussed the “Cali Rally” with my subscribers at 420 Investor all year, sharing a detailed forecast just before Labor Day in September monthly edition of the 420 Investor Newsletter

Traders are flooding into the market, similar to what happened last year in advance of the elections as well as in 2014 after Colorado legalized. Often traders will gravitate towards names that have “cannabis” or “marijuana” in the names, even if they don’t have any understanding about the underlying businesses. While chasing momentum can be lucrative, it’s important to remember that this is a greater fool’s game, meaning that one can profit only if someone else buys the stock at a higher price in the short-run. Most of the stocks that traders are chasing are overvalued and impaired financially. These are not “buy and hold”!

Stock promoters, newsletter writers and even the companies themselves are all excited about the price action, but none of them are likely to give you any sort of warning that the party is over. This will end, though, just like the other rallies, with those showing up late to the game left holding the bag. Hopefully our readers are aware of the risks trading stocks on the OTC, especially ones with weak fundamentals like many of the ones capturing trader attention in this rally.

While I think the market is likely to continue its advance, those coming into the market should be careful given the sharp ascent thus far. Simple portfolio management practices, like diversification, can help prevent outsized losses in any individual name from having a significant impact on one’s overall portfolio, but cannabis stock traders should understand how correlated the stocks in the sector tend to be. One cautious utterance from Jeff Sessions could knock 10-20% off of the group very quickly.

One risk that I suggest not taking is trading in names that are not current in their filings. One stock that has rallied sharply on very big volume is Canadian Cannabis Corp (OTC: CCAN), which hasn’t filed a quarterly or annual filing since the end of 2014. The company trades with a “stop sign”, which should be ample warning:

Despite the lack of information, traders are piling into this stock, though the SEC has taken action against other companies for not filing. The stock has increased over 900% on heavy volume: 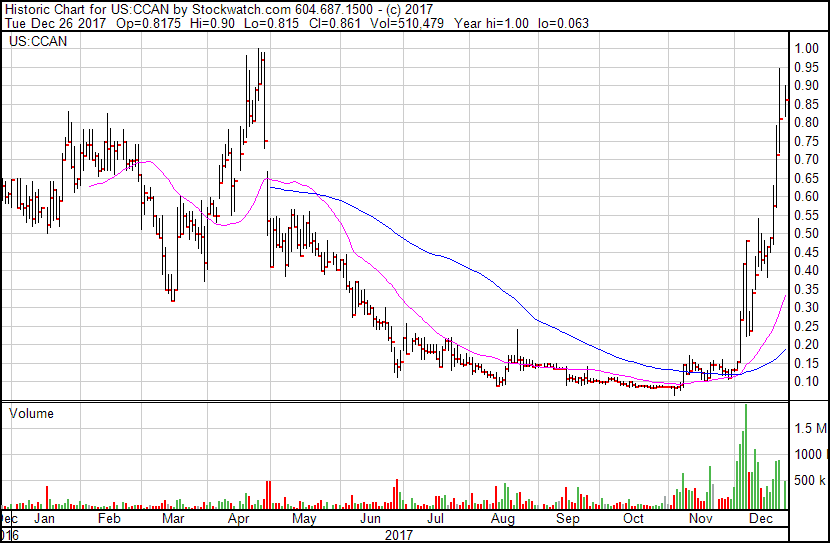 One never knows if or when the SEC will move to suspend trading in a stock, but it is usually extremely detrimental to the price when it does so. Another example of a company that doesn’t even exist but that has a stock that is seeing signs of life is CannLabs (OTC: CANL), which also trades with the “stop sign”, as does Vape Holdings (OTC: VAPE).  You can check any company’s status at www.otcmarkets.com.

For those interested in investing in the sector rather than speculating on worthless companies with cute names or trading symbols, the good news is that there are a lot of choices compared to 2014 or even a year ago. A great starting point, in my view, is the list of companies we provide that are on track to annual sales in excess of $10mm. While generating significant sales is not a promise of good future investment performance, these 15 companies are at least real.

Warren Buffett wasn’t necessarily talking about cannabis stocks when he shared his sage advice, but traders in the sector should heed his words: “If you’ve been playing poker for half an hour and you still don’t know who the patsy is, you’re the patsy.” There is an exciting trade underway in cannabis stocks, but readers should be careful to understand that it is just a trade for many of the stocks that are rallying.