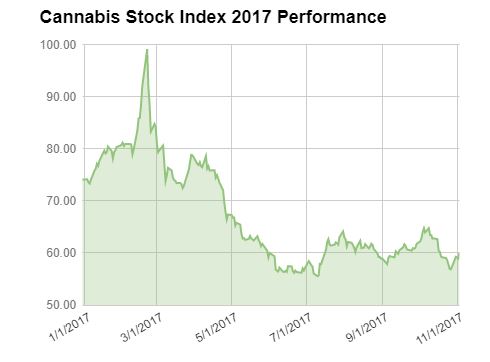 While Canopy Growth posted the second highest performance for the week, rising 32.8%, 12 of the 54 index members posted double-digit returns: 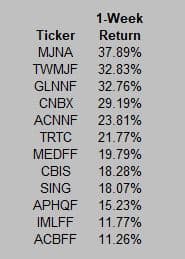 Not surprisingly, some of the other large LPs in Canada, including Aurora Cannabis (TSX: ACB) (OTC: ACBFF), Aphria (TSX: APH) (OTC: APHQF) and MedReleaf (TSX: LEAF) (OTC: MEDFF), rode the coattails, as some investors may be projecting other strategic buyers ahead or perhaps consolidation. Canopy Growth CEO Bruce Linton said the market got this wrong, who said it doesn’t validate the sector but rather Canadian public policy (at about 25 minutes into the webinar). Last week, prior to the strong rally in these names, I had pointed to a trend through the first four weeks of October that indicated the large-cap LPs were already outperforming smaller peers.

The rally in AusCann Group (ASX: AC8) (OTC: ACNNF) is likely related to Canopy Growth being a strategic investor in the company, but the rest of the group appears to have rallied on pure sentiment, with no connection to the news. I would suggest that some of these stocks are very low quality and/or highly promotional as well. The move in Terra Tech (OTC: TRTC), which I don’t include in that group, is interesting, because clearly no strategic buyers from other industries are likely to invest in it as long as cannabis remains federally illegal.

Whether or not the rest of the market “should” have rallied on the news may be subject to debate, but the rally was welcomed nonetheless, as the index was getting awfully close to its 2017 lows going into the week. The Canadian LPs were already in the rally mode and up substantially in 2017, but the U.S. names have been under pressure all year as they have consolidated the massive gains from a year ago into the elections. Concern over potential regulatory threats from the federal government have certainly weighed on the sector. Next up in terms of catalysts is likely to be the implementation of regulated medical cannabis along with adult-use in California on January 1st.