This data-driven, fact-based tracker will continually update based on new financial filings so that readers can stay up to date. Companies must file with the SEC or SEDAR and be current to be considered for inclusion. When we launched this resource in May 2019, companies with quarterly revenue in excess of US$2.5 million qualified. As the industry has scaled and as more companies have gone public, we have raised the minimum several times subsequently, including a move to US$5 million in October 2019, to US$7.5 million in June 2020, to US$10 million in November 2020 and US$12.5 million in August 2021. Due to the rapid growth in the cannabis industry, we raised the minimum to US$25 million (C$31.5 million) to qualify for what we now call the senior list and introduced a junior list with a minimum of US$12.5 million (C$15.6 million) in September 2021.

At the time of our last update on July 1, 38 companies qualified for inclusion on the senior list, including 31 filing in U.S. dollars and 7 in the Canadian currency. The junior list now includes 9 companies reporting in U.S. dollars and 6 in Canadian dollars. There were no additions or deletions during the month of July. On a combined basis, the Public Cannabis Company Revenue & Income Tracker now includes 53 companies.

Included Companies That Reported in July

Since our last update in June, there have been no financials released by junior U.S. Dollar reporting companies that meet the criteria for the revenue tracker. Each of the other categories included at least one company reporting during the month.

Two companies reporting in American dollars released their financials during July: Tilray (NASDAQ: TLRY) (TSX: TLRY) and Turning Point Brands (NYSE: TPB). Tilray, which is down a lot in 2022, rallied after its Q4 financials and conference call. Cannabis revenue fell 3% sequentially and 1% from a year ago to $53.3 million. This represented only 35% of total revenue. The company used $20.5 million to fund operations and invested $22.5 million in capital expenditures during Q4. It took an impairment charge of more than $378 million as well. Its adjusted EBITDA fell 13% from a year ago. Turning Point Brands sunk after it reported, as the company saw a reduction in overall sales from a year ago of 16%, with net income plunging 65%. Its cannabis-focused operations, Zig-Zag, held up better. 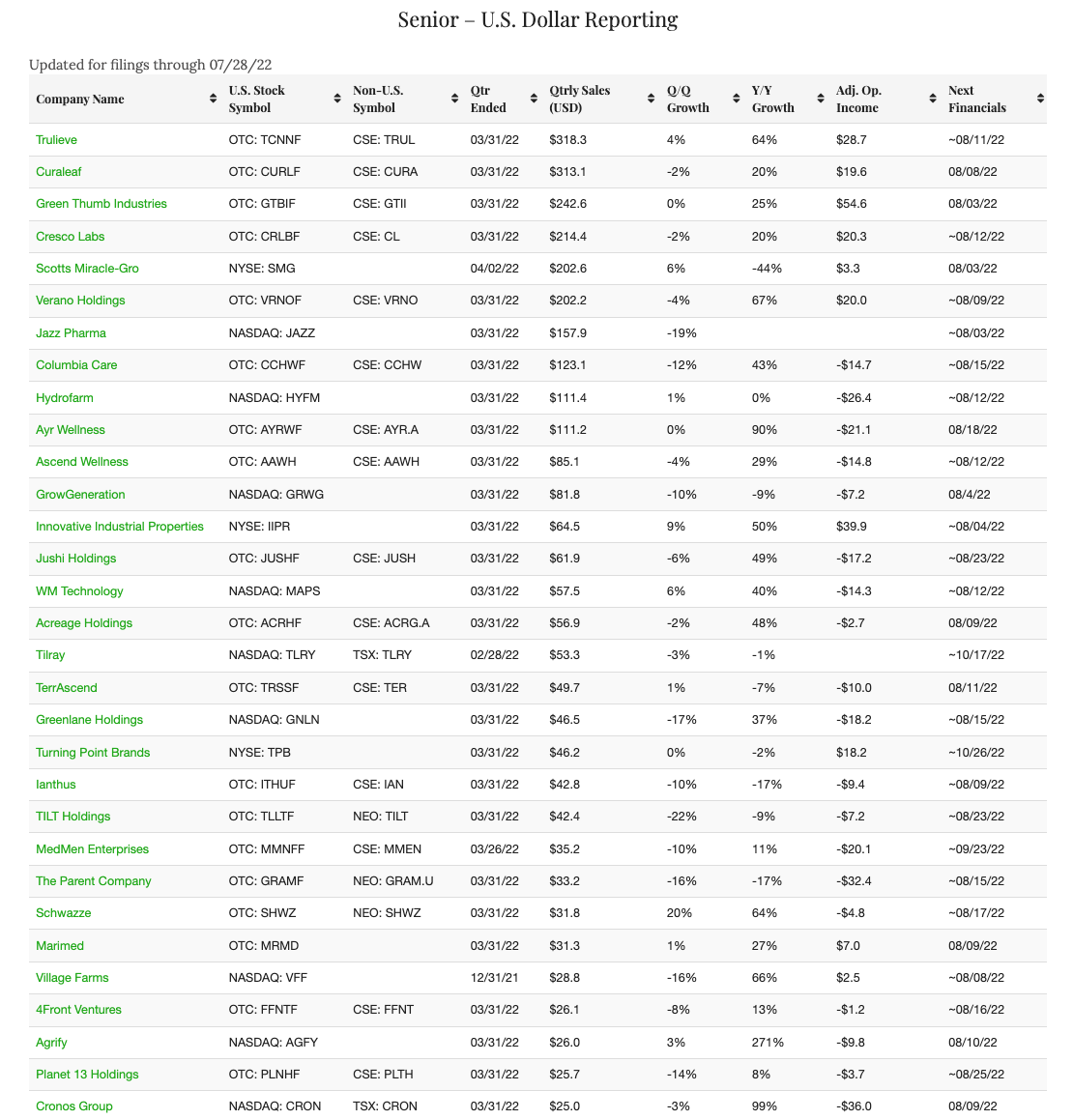 Organigram (NASDAQ: OGI) (TSX: OGI), which reports in CAD, released their financials during the month. The company continues to make a lot of progress on its revenue, which increased 20% sequentially and 88% from a year ago during its fiscal Q3 to C$38.1 million. Despite a low use of cash, high net-cash with limited debt and continued strong growth expected by the analysts, the stock trades at tangible book value.

In August, we are expecting a report from Canopy Growth (NASDAQ: CGC) (TSX: WEED) on Friday, August 5th. Analysts project the company will generate revenue in its Q1 of $C$113 million, down 17% from a year ago, according to Sentieo. The company is expected by analysts to have an adjusted EBITDA loss of C$75 million.

The Valens Company (NASDAQ: VLNS) (TSX: VLNS) reported its Q2 for fiscal year 2022, continuing to lead the Junior names in Canada. Revenue, up 28%, was boosted by the substantial M&A conducted by the company. The company reported debt of C$40 million with cash of C$24.9 million. It used about C$20 million to fund its operations in Q2. Product sales made up 87% of overall revenue