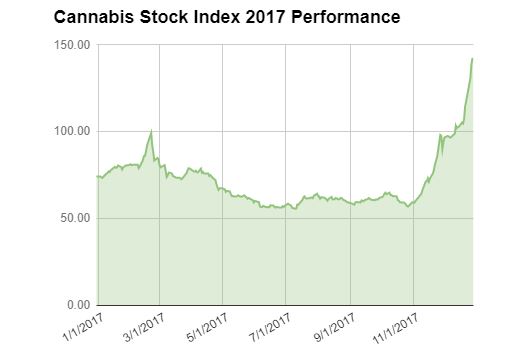 Like 2016, when a late-in-the year rally related to the elections in the United States and then a rotation into Canadian LPs fueled a full-year gain of 88.8%, the gains in 2017 came at the end of the year. On October 27th, the index was at 56.85, down 23.3% year-to-date, but news of the landmark investment by alcohol giant Constellation Brands (NYSE: STZ) into Canopy Growth (TSX: WEED) (OTC: TWMJF) set off a 150% rally into year-end that included nine consecutive weekly gains. More recently, the fuel for the rally has been optimism related to California legalizing on January 1st. 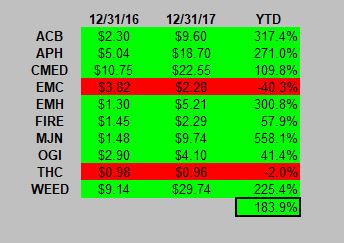 My proprietary Canadian Cannabis LP index, which is rebalanced monthly and now includes 27 publicly-traded LPs at year-end, increased 146.4% during the year, producing a total return for the past two years of 1011.8% after a 351.2% gain in 2016. Interestingly, the first half of the year left the Canadian LP stocks down 18.9% year-to-date in 2017. In 2016, the LPs were down 1.5% through mid-year and down 5.7% through May 31st. Another interesting observation about these 27 publicly-traded LPs is that the combined market cap now exceeds C$26.5 billion based on fully-diluted, in-the-money shares. Here is the full list: 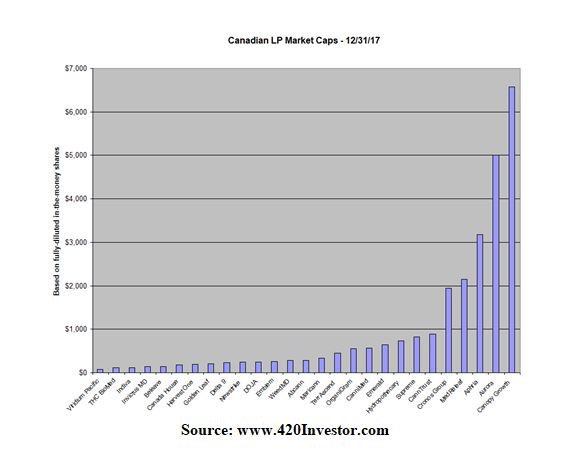 The Cannabis Stock Index, which is rebalanced quarterly, had 53 members during Q4. While five stocks posted declines, twenty posted gains in excess of 100%. The eight stocks that more than quadrupled included:

For Q1, the index will now include 75 names, a big increase from the 53 in Q3. In a sign of much better liquidity for the market, the minimum average trading value jumped from $100K in Q4 to $300K. This includes volume in the U.S. as well as on Canadian or Australian exchanges, with the calculation performed on December 15th.

The rebalanced index includes 3 Australian companies (5%) and 45 Canadian companies (60%). Of those, 17 are licensed producers (23%). 60 of the 75 members had average daily trading dollar volume above $500K as of mid-December.

After soaring in early 2014 and then losing 97% of its value over the following 23 months, the cannabis stock index is in the solid rally mode, aided by strength in Canada. 2018 is a year with multiple sector catalysts, including California legalizing on January 1st and Canada and Massachusetts legalizing in July. While I am bullish on the prospects for the cannabis industry, the universe of publicly-traded stocks, while offering much better options than just a few years ago, is still filled with landmines. Still, for those who do their homework, there appear to be a lot of opportunities ahead.