When Canopy Growth (TSX: WEED) (OTC: TWMJF) reported its FY17-Q3 ending 12/31/16 earlier this month, it did not include the results from Mettrum, as the acquisition didn’t close until January 31st. During the conference call, CEO Bruce Linton indicated that the company would provide an update before the end of February in the form of a Business Acquisition Report, though it wasn’t due until April.  Kudos to CFO Tim Saunders, as the company released it on February 23rd, and we have uploaded it for the benefit of our readers and have used the information to update Canopy’s Investor Dashboard that we maintain.

The 66-page document includes detailed unaudited financials for Mettrum’s Q3, which ended 12/31/16, as well as some some pro forma information for the YTD income statement and a balance sheet if the two companies had been one as of that date.

Mettrum’s FY17-Q3 sales grew 10.5% from Q2 to $5.29mm, representing growth of 162% from FY16-Q3. These numbers include a month of operations following the announcement of the company’s voluntary recall and trailed Canopy’s own 15% sequential and 180% annual growth. 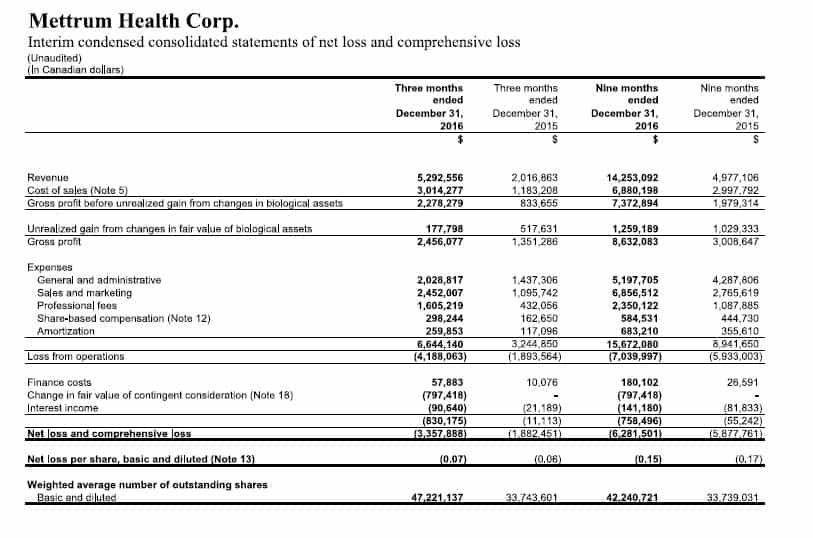 Some of the highlights of the pro forma balance sheet:

Canopy Growth’s financials for the year ending 3/31/17 are due by June 29th and will represent the first report of the company’s combined operations subsequent to the merger.