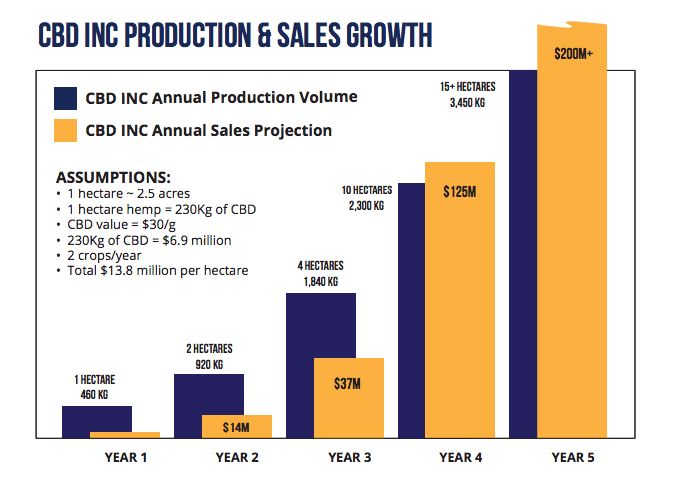 We continue to caution investors in the cannabis industry that too many bad actors trying to raise millions of dollars are running rampant.  Last week, we examined Cultivation Technologies Inc., which is trying to raise $20mm from investors with very bold financial projections and a significant omission about its CEO’s past.  Today, we turn our attention to CBD Incorporated, a company incorporated in Delaware just three months ago and which purports to be on the verge of producing more than $100mm in sales on a very small capital investment, as described in its press release entitled “CBD Incorporated to build “liquid gold factory,” offers investment opportunity”: 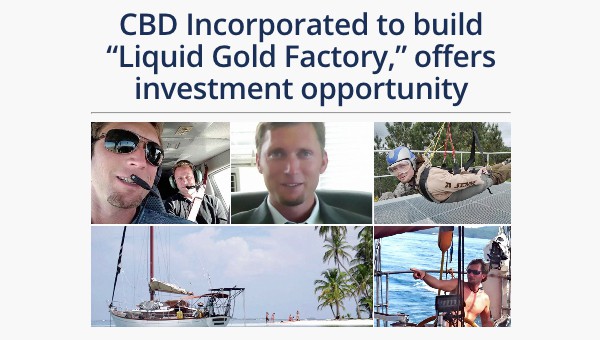 CBD, Inc. intends to become a premier supplier of wholesale CBD to the supplement and cosmetic industries, as well as a leading licensor of cutting-edge CBD extraction technology. The company claims that its patent-pending extraction system is able to produce more than 4,000 pounds of CBD per year from just twenty acres of hemp, at a total value of $100 million/year at current CBD prices. (To put this in perspective, 4,000 pounds of pure CBD would fit in the back of a pickup truck.)

In order to achieve its audacious goals, CBD Incorporated has launched a stock offering to raise $1.2 million to be used to build a mass production facility.

Further, the company states (emphasis mine):

CBD, Inc. management’s financial goal is to create a 100-million-dollar annual revenue stream and list the company on NASDAQ at a valuation of $500 million in four to five years, hoping to give early investors at least a 40-to-1 return on their investment. “We think we can do even better, but this is our conservative estimate.”

CBD Inc. points readers interested in investing to “TheLiquidGoldmine.com” and uses the analogy to gold in its pitch deck and on a video in the site, discussing how CBD per gram is more than twice as costly as gold. 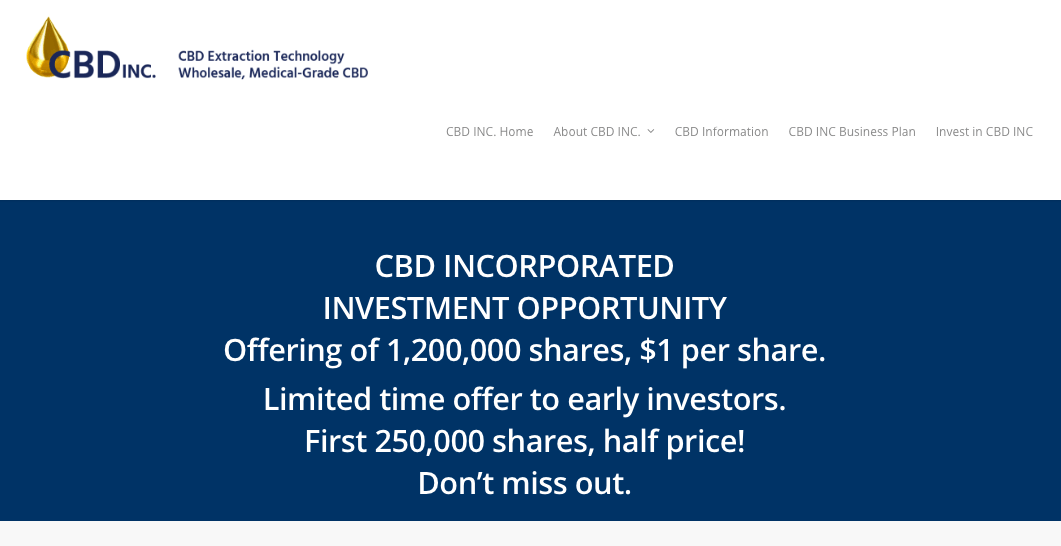 Further, while the website states that this is an SEC-registered offering under 506(c), we were unable to find evidence that this is the case.

We contacted a company representative who was unable to verify this claim but forwarded our inquiry to the CEO, Tapio Maki. The same representative informed us that the company intends to do a Reg A+ offering (crowdfunding), open to unaccredited investors, upon completion of this first financing round.

While the company is headquartered in Calabasas, California, the operations will be in Portugal, where the CEO resides. The company intends to be “one of the top producers of medical grade CBD and the most remarkable intellectual property licensor in the field.” The financial projections sure seem outlandish on the surface, with lots of revenue and very little expense:

We were surprised to see that Morgan Stanley was listed as a partner of the company, as the esteemed investment bank has certainly never revealed its involvement in the cannabis industry. This cached version of CBD Incorporated’s “about” page as well as its slide deck mentions the company:

The corporate website no longer includes mention of Morgan Stanley. We contacted the La Jolla office of the firm in order to verify the information. We did not hear back from Morgan Stanley, but the CBD Inc. website was updated within hours of our inquiry, no longer reflecting Morgan Stanley as a Banking partner.  The company’s slide deck, though, makes it clear: 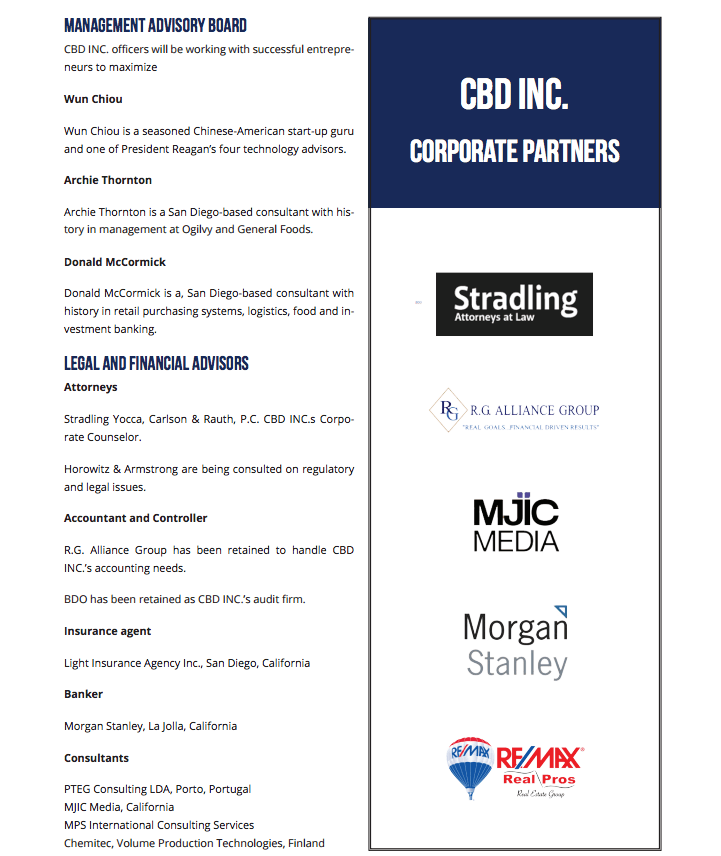 We haven’t looked into the background of the CEO or the management team at this point, and perhaps these bold claims could all pan out: Just $1mm of investment could lead to a $500mm market cap on the NASDAQ in five years. We urge investors to independently assess the assumptions that any company is making.  Further, we recommend to companies raising capital in the cannabis sector to be careful about making false claims, like the involvement of companies that aren’t involved or the filing of SEC documents that don’t yet exist.