Alan Brochstein, CFA, discussed the “State of the Legal Canadian Cannabis Industry” at the eMoneyShow Virtual Conference on 10/30/15:

One of the biggest barriers to investing in cannabis companies is that it remains federally illegal. That is not the case in Canada, where a new system of regulated commercial production launched in 2014. That program, MMPR, is showing traction after a slow start, but the recent elections in Canada point to the strong likelihood that the country could become the first major nation to legalize cannabis consumption for adults. In his presentation, Alan discussed the background of the Canadian medical marijuana industry, the current leading providers and an outlook for the next few years. 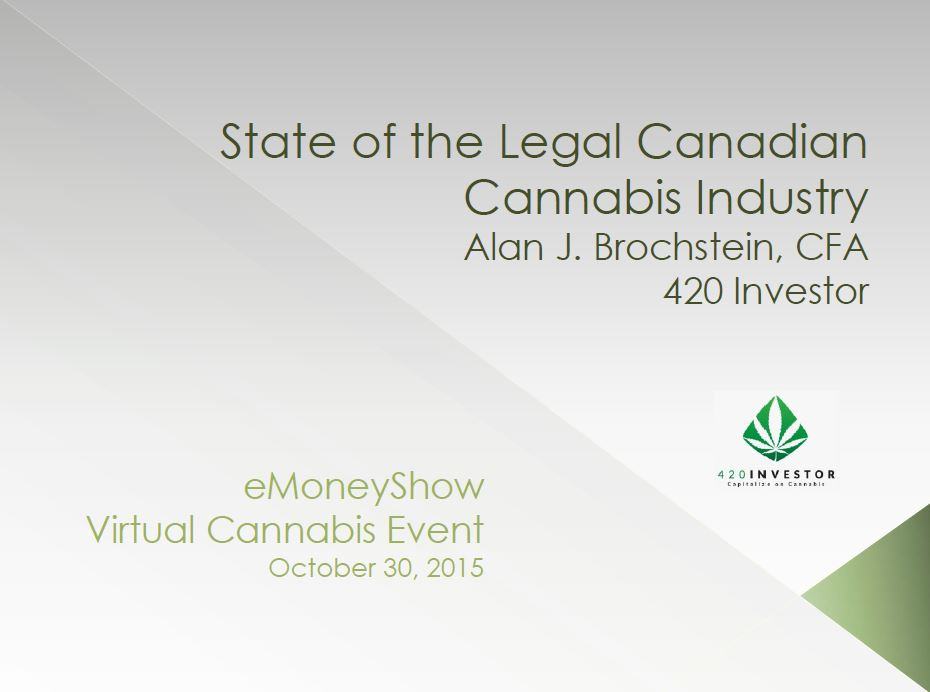 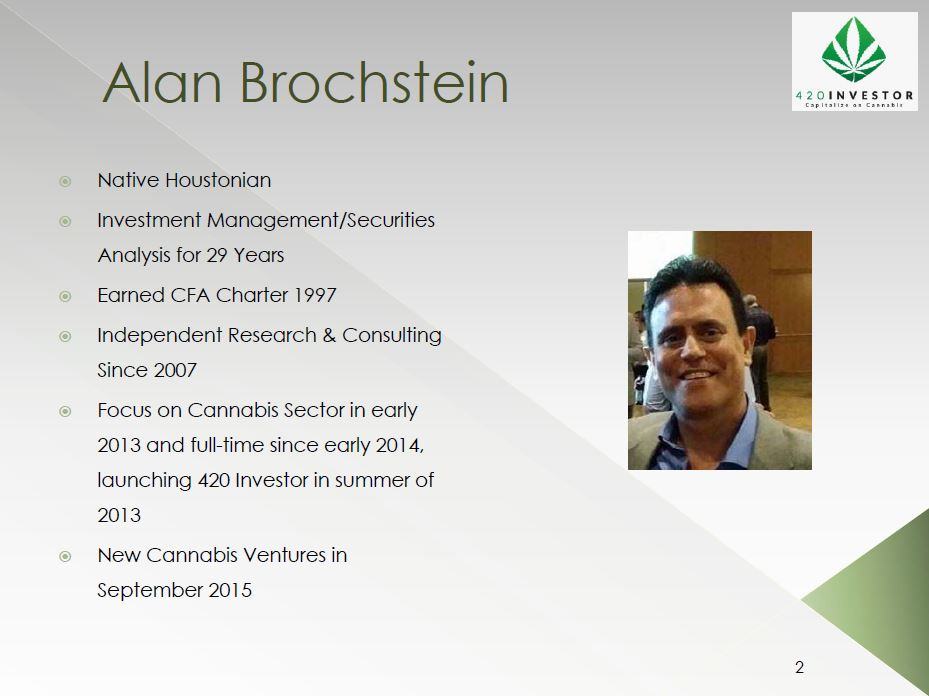 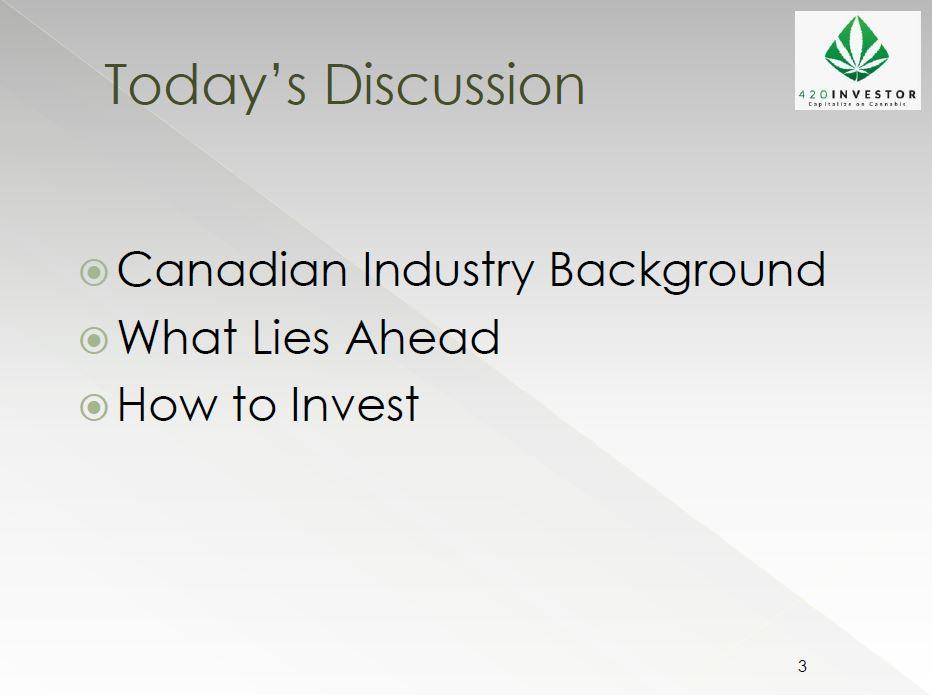 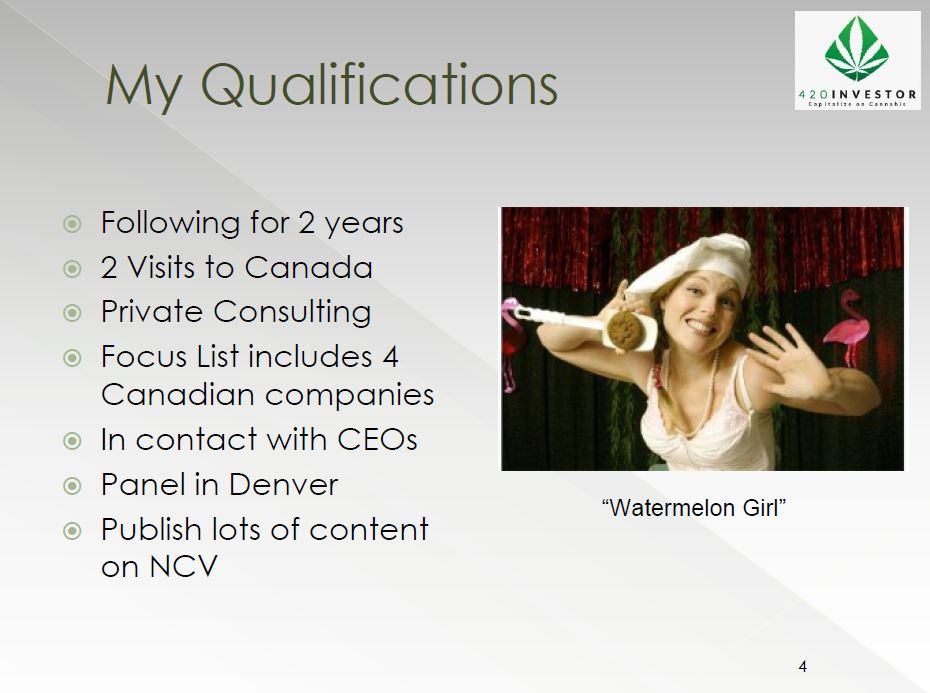 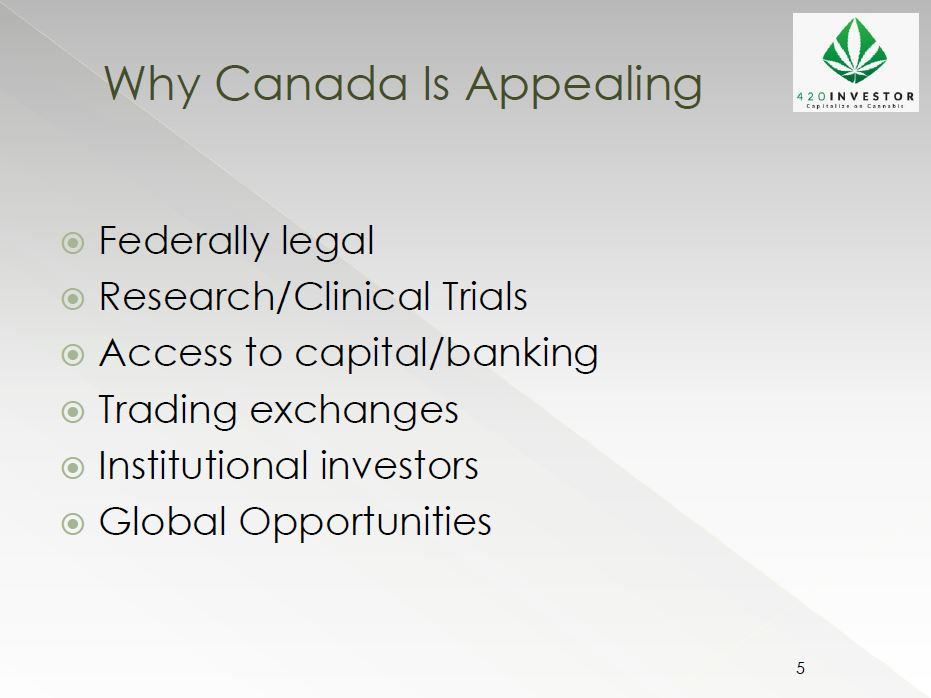 Several factors that make Canada the best place in the world in which to invest in legal cannabis. 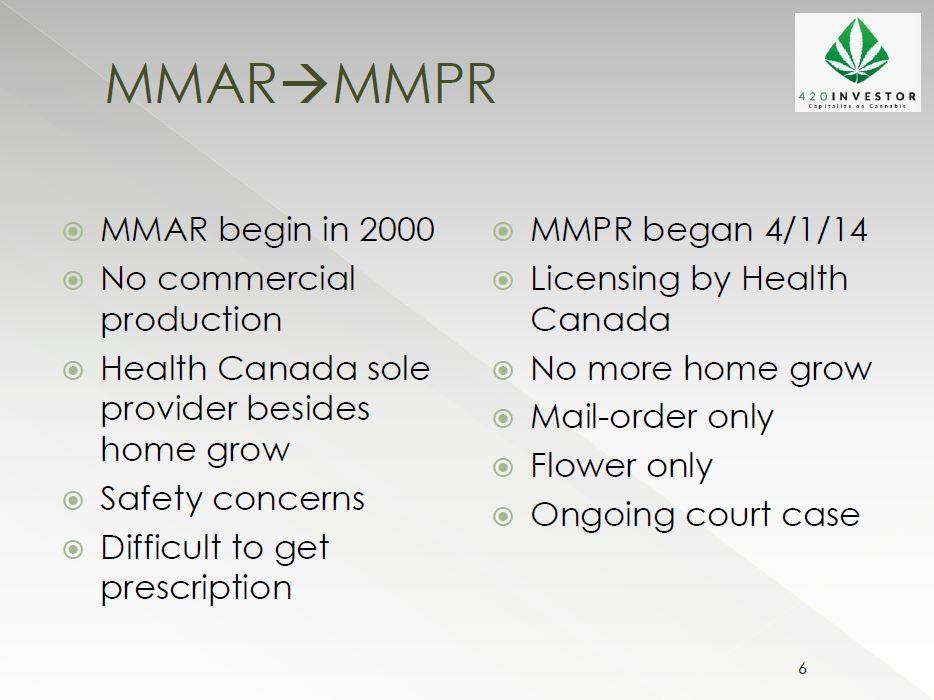 Old program was replaced, but it isn’t yet dead due to litigation.  The new program introduced a competitive commercial production system. 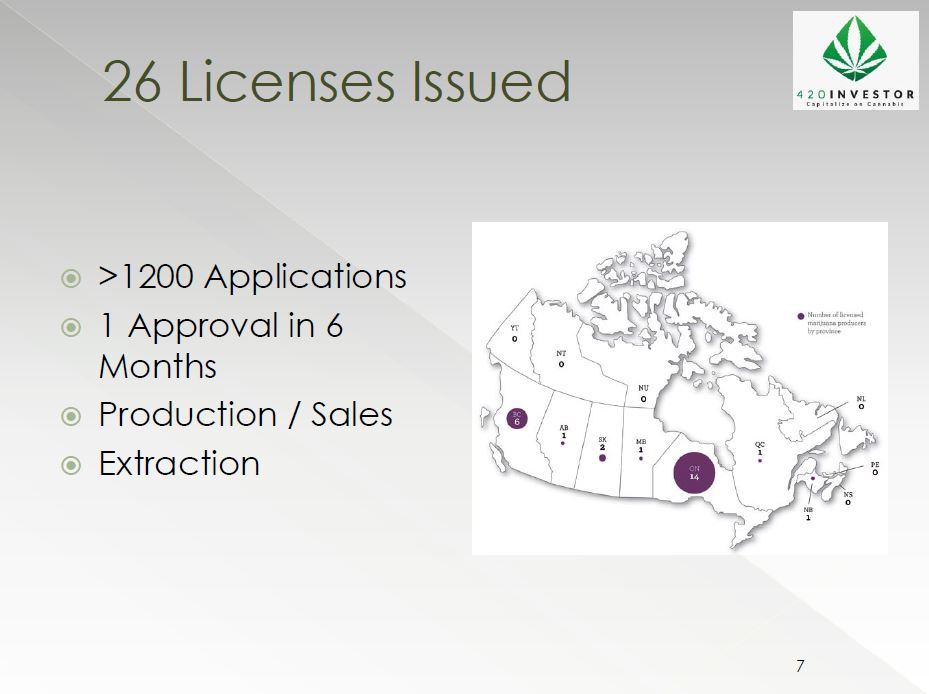 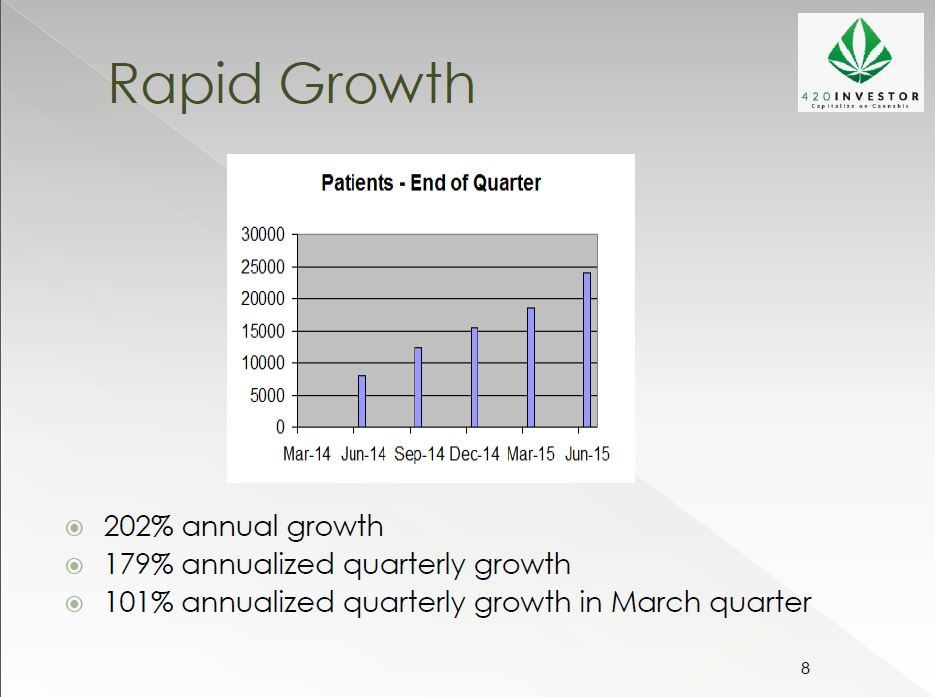 Health Canada released data for the quarter ending 6/30 on 10/22. The patient count accelerated from the prior quarter and added to confidence in the adoption rates.  Health Canada has provided an estimate that the count could rise to over 400K by 2024, but this seems conservative. 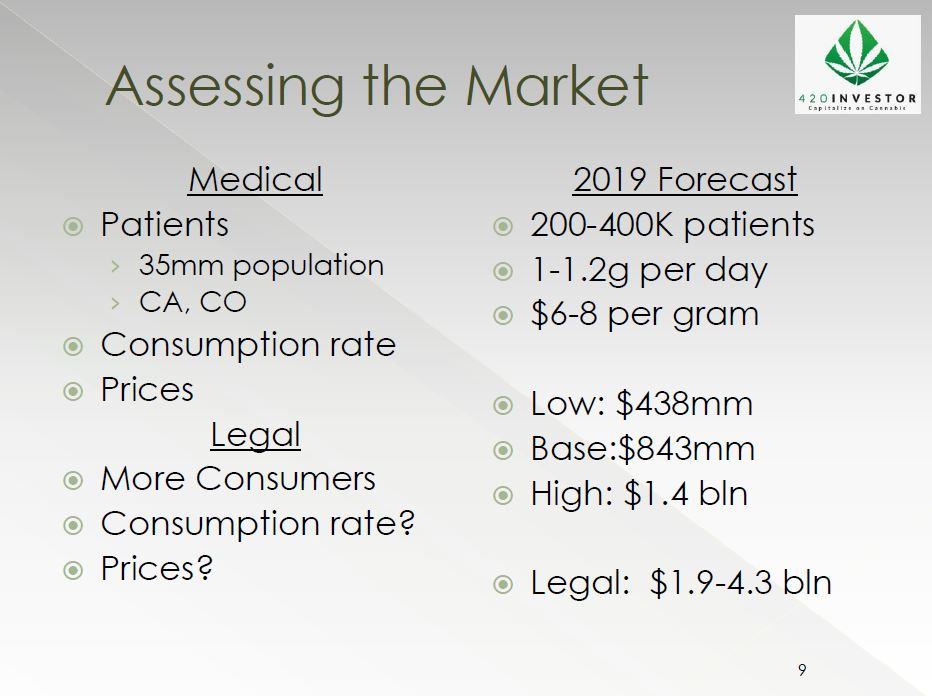 The 4-year outlook is based upon the assumptions in for patient count, consumption rate and pricing.  Canada has a population of about 90% of California’s and 7X of Colorado’s.  2% of the population would be 700K, suggesting that these assumptions could prove conservative.  A legal market would be much larger but the consumption rates would likely be much lower on a per capita basis. 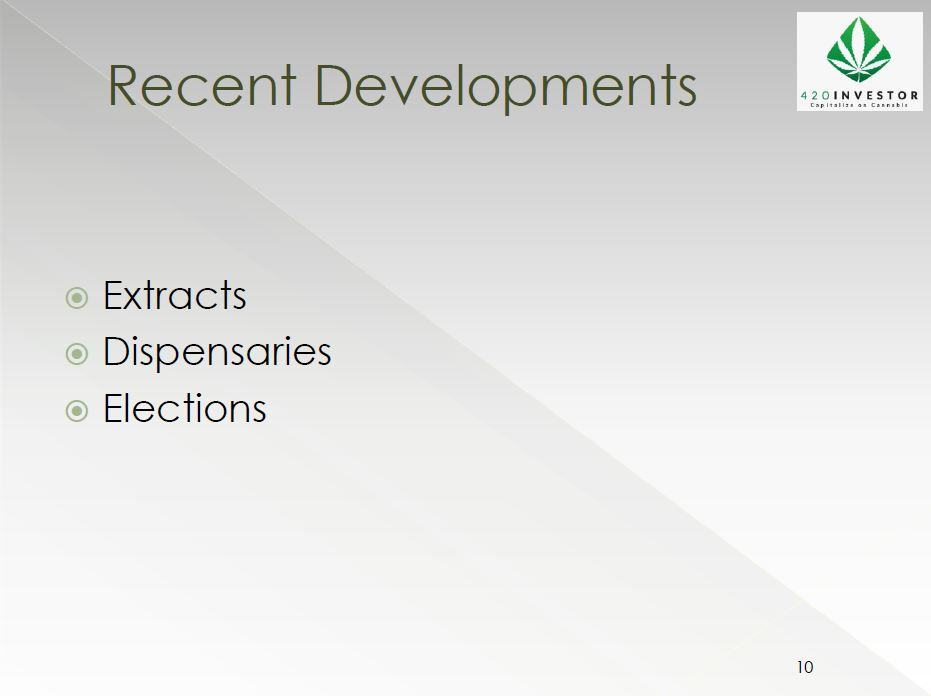 These are all favorable trends.  The new extracts rules aren’t yet permitting retail sale despite the award of production licenses and the limits seem extreme, but this is a step in the right direction and likely to evolve quickly.  Dispensaries remain a challenge, but Health Canada has moved to invoke advertising constraints while at the same time Vancouver has cracked down.  Canopy Growth Corp unit Tweed has created a storefront presence, though without the ability to distribute product. The recent elections are a huge upside potentially. 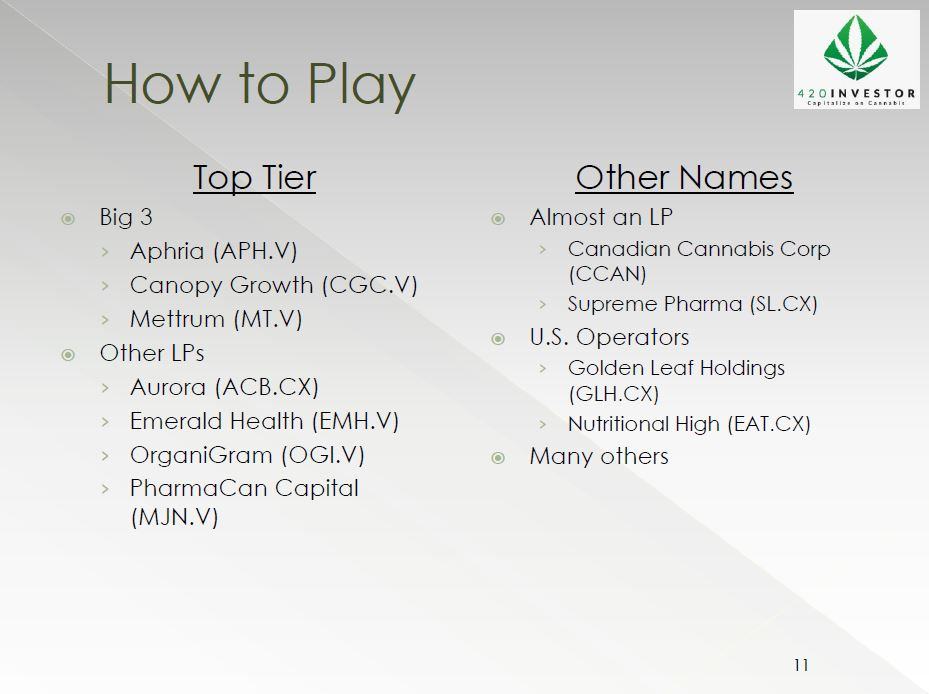 The Big 3 include Canopy Growth (Tweed, Bedrocan), Mettrum and Aphria.  There are several other publicly-traded LPs, including Aurora (not yet licensed to sell), Emerald Health, OrganiGram and PharmaCan Capital (which has stake in 5 LPs), as well as some that are close to being an LP (Canadian Cannabis Corp is acquiring Hydropothecary, but it hasn’t closed yet, while Supreme Pharma is one of a handful of companies awaiting inspection).  Golden Leaf Holdings and Nutritional High are domiciled in Canada while operating in the United States. 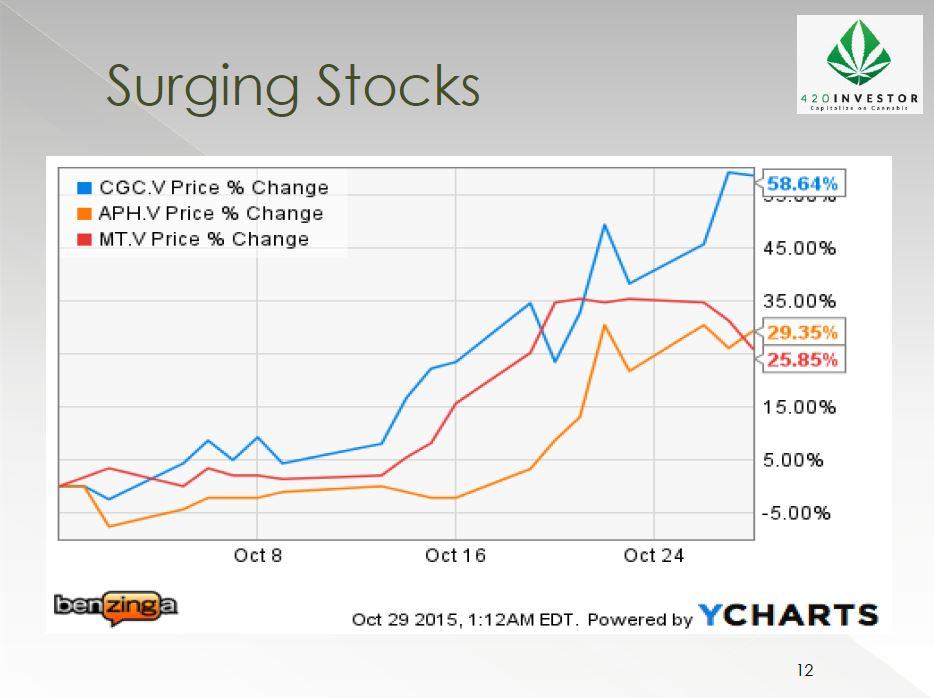 The stocks have taken off since the elections. 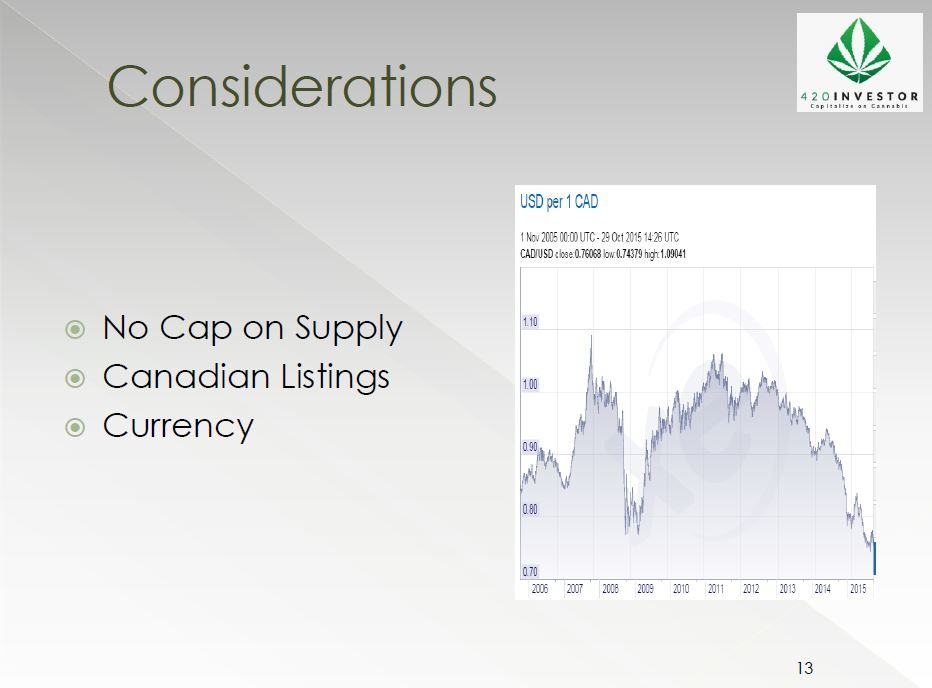 While the outlook is favorable, investors should be aware that there is no cap on supply in Canada, as Health Canada could approve many more producers.  With that said, there are reasons to doubt that would happen, as the regulator is highly concerned about safety. Additionally, U.S. investors should be aware that most of these stocks, with the exception of OrganiGram, do not actually trade on a U.S. exchange. Finally, the Canadian dollar has been hammered to a 10-year low.  The trend has been lower, but perhaps it could reverse too. 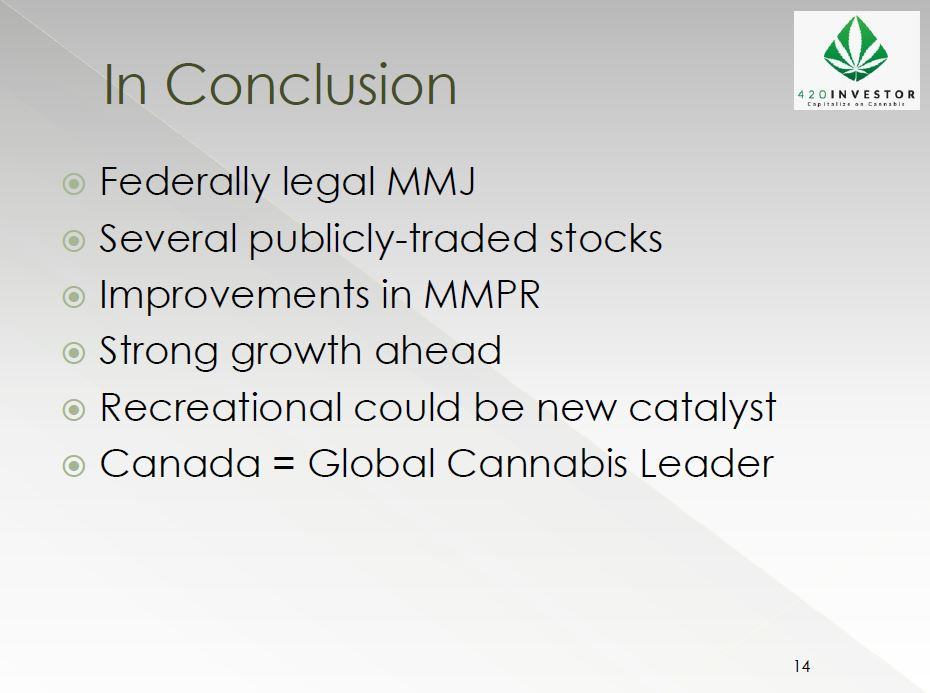