The ongoing litigation between Scott Van Rixel of Bhang and Chet Billingsley of Mentor Capital (OTC: MNTR) has taken a turn for the worse for Mentor. Federal judge Jill Parrish issued a ruling against Mentor that suggests the company has violated federal securities laws. She ruled in favor of plaintiffs Gena and Susan Golden, granting them motion for a partial summary judgment in their favor.

Mentor first entered the cannabis space in early 2014, investing in Bhang, but the deal quickly blew up. Mentor continues to carry a receivable for $1.5mm that Bhang owes the company. Mentor’s 10-Q stated:

On December 29, 2016, Mentor obtained a judgment in the amount of $1,921,534.62 against Bhang Corporation and its predecessor in interest, Bhang Chocolate Company, Inc., in the United States District Court for the Northern District of California related to an action filed by Mentor on August 11, 2014 seeking rescission of the February 28, 2014 co-operative funding agreement with Bhang Corporation (“Bhang Agreement”) and return of the $1,500,000 paid by the Company to Bhang. The judgment accrues interest at the rate of 10% from December 29, 2016 until such time as the judgment is satisfied. Mentor is continuing its efforts to collect on the judgment in California and other states where Bhang operates. Mentor intends to enforce this judgment.

As part of the judgment Bhang owners, Scott Van Rixel and Richard Sellers, who together purchased 117,000 shares of the Company’s Common Stock pursuant to the Bhang Agreement have the option until December 29, 2017 to return some or all of their shares in exchange for payment of the original purchase price of $1.95 per share plus a pro-rata amount of $58,568 in interest for such returned shares. Mentor will account for the return of shares as a capital transaction if and when the shares are remitted back to the Company. See Note 4 to condensed consolidated financial statements.

In July 2015, Mentor was served with a complaint in an action in the United States District Court for the District of Utah initiated by the wife and daughter of Bhang’s corporate counsel related to 75,000 shares of Mentor’s Common Stock purchased by them from Bhang Corporation’s CEO in a secondary sale. The shares purchased by plaintiffs are returnable to Mentor as part of the 117,000 shares covered in the judgment awarded in the Bhang matter, above. Mentor was not a party to this transaction and intends to vigorously defend itself against all claims in this case. No trial date has currently been set in this action.

The case referenced in the third paragraph is the one in which Judge Parrish ruled. It’s not clear why Mentor stated that the trial date was not set, as the oral arguments were made in January. The Goldens argued that the share sale wasn’t valid because Mentor “failed to comply with the Bankruptcy Court’s Order Confirming Mentor’s Plan of Reorganization.” Specifically, Mentor had 120 days to file an amendment to its articles of incorporation with the Secretary of State in California, but never did so.

The undisputed facts show that Mentor failed to file the required amendments, and thus the Plan never went into effect.

Because Mentor failed to properly adhere to the requirements of the bankruptcy reorganization, the status of all of the shares issued subsequently via warrants is in question. The Goldens, who paid $204,750 for 75K shares, received stock that wasn’t properly registered.

Mentor Capital derives the vast majority of its revenue from the waste business, with its subsidiary Waste Consolidators generating 99.7% of its sales in the first half of the year, according to its 10-Q filing. Its current interests in the cannabis industry are limited to an equity interest in Electrum Partners (Leslie Bocskor’s advisory firm), secured promissory notes with G FarmaLabs and a contractual interest in legal recovery, a small investment in GW Pharma (NASDAQ: GWPH), a convertible note in NeuCourt, Inc. and Mentor IP, LLC. 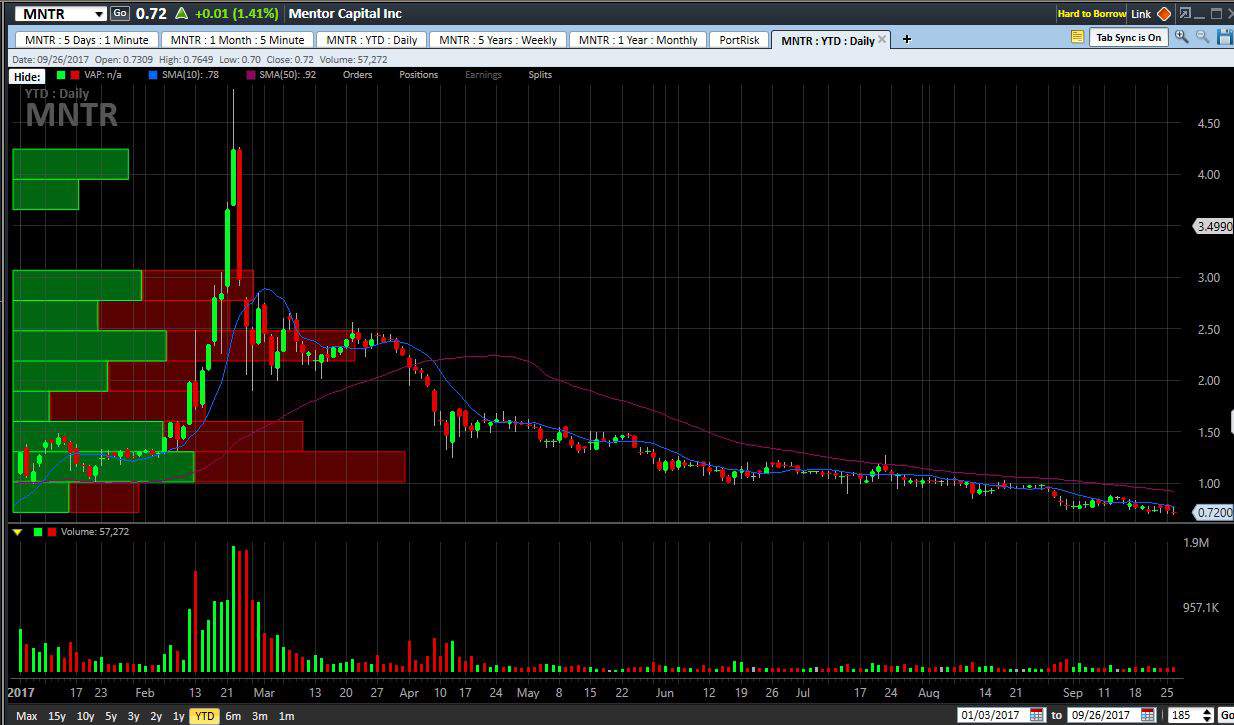 Billingsley has been selling stock consistently since August 2016, and its SEC filings show 23 sales made by him in 2017 alone. More recently, he announced that pursuant to a Rule 10b5-1 plan:

…exactly 208,000 shares will be sold between 8/15/2017 and 11/14/2017 in equal weekly sell order lots of 16,000 shares split into three individual sell orders of approximately 5,333 shares each, placed on the first two or three days of each week, during the first 13 weeks of the plan, and priced between the BID and ASK price at approximately $1.00 per share. Any residual shares remaining in the last ten trading days of the three-month plan will be sold at a market price chosen by the independent broker administering the Rule 10b5-1 plan.

The insider sales may compound Billingsley’s issues given his awareness of the company’s failure to properly file amendments to Mentor’s articles of incorporation. Given all of the shares issued in recent years via warrant exercises, it’s not clear how the company will address the consequences of the court’s ruling. As of mid-August, the company reported 22.69mm shares outstanding, up significantly from 6.68mm at the end of 2013.