Cannabis stocks accelerated their rally in May, with the Global Cannabis Stock Index gaining 27.0% to 32.52: 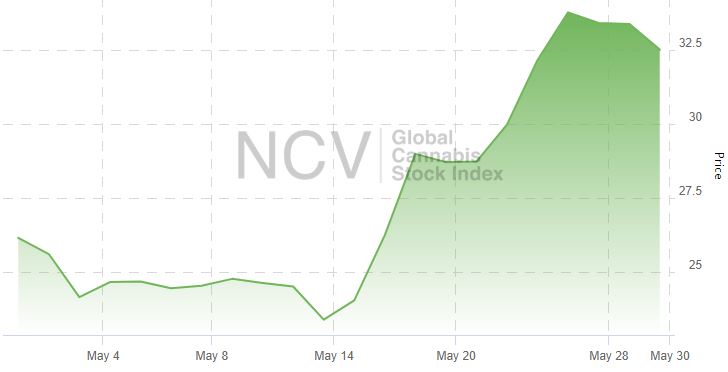 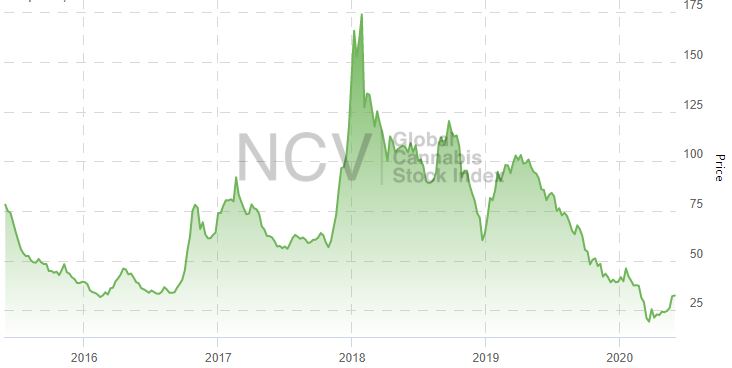 The strongest 4 names in May increased by at least 60%:

CV Sciences rebounded along with CBD peers in the back half of May, leaving it down over 8% year-to-date. The company reported its Q1 in early May, beating its own guidance. KushCo Holdings had no substantive news during May. With the rebound it remains down almost 28% year-to-date. Power REIT, which joined the index at the end of March, is up almost 160% year-to-date. The diversified REIT announced an acquisition of a cultivation and processing facility in Maine, with a total investment of $4.9 million, its first cannabis property outside of Colorado. Village Farms reported its Q1 in mid-May, with its Pure Sunfarms JV generating revenue of C$18.0 million,  up 25% from a year ago, which provided it with revenue of C$10.2 million based on its ownership. Village Farms is down almost 13% in 2020.

The 4 weakest names fell or rose by less than 4% during May:

22nd Century Group, which is down almost 25% this year, reported financials in early May. The company took out and then quickly repaid a PPP loan. After a very strong performance in 2019, MediPharm Labs has declined almost 56% in 2020. The company announced that it has delayed filing financials for Q1 until June 29th or earlier and expects to take a write-down of inventory after continued volume declines and pricing pressures for bulk extracts across the sector. Liberty Health Sciences, which is down 22% in 2020, didn’t release any news in the month. It is expected to report its fiscal year-end in June. Harvest Health & Recreation reported its fiscal Q1 financial results during the month, sharing a plan to return to profitability as it focuses on Arizona, Florida, Maryland and Pennsylvania. The state was also operating in Arkansas, California and North Dakota during the month and has announced the pending sale of some of its California assets.