Canadian licensed producers, after twelve consecutive monthly declines through March, posted their second straight gain during May, with the Canadian Cannabis LP Index rising 20.2% to 319.23, far surpassing the performance of the S&P/TSX Composite, which rose 2.8%: 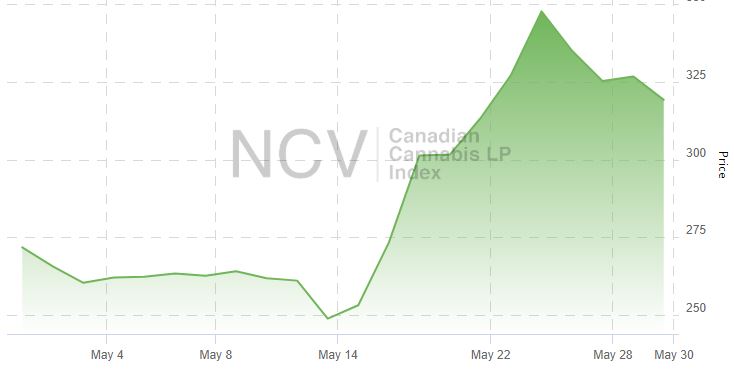 Tier 1, which included the LPs that are generating cannabis-related sales of at least C$10 million per quarter (in 2018, we used C$4 million as the hurdle), which fell in April, was boosted by a rebound in one stock this month, rising 26.7% to 471.32%. In 2019, it declined 38.5%, when it ended the year at 642.23, and Tier 1 has declined 26.6% so far this year, substantially worse than the other tiers. This group included Aphria (TSX: APHA) (NYSE: APHA), Aurora Cannabis (TSX: ACB) (NYSE: ACB), Canopy Growth (TSX: WEED) (NYSE: CGC), HEXO Corp (TSX: HEXO) (NYSE American: HEXO), MediPharm Labs (TSX: LABS) (OTC: MEDIF), Organigram (TSXV: OGI) (NASDAQ: OGI), Radient Technologies (TSXV: RTI) (OTC: RDDTF), Valens Company (TSXV: VGW) (CSE: VGWCF) and Zenabis Global (TSX: ZENA) (OTC: ZBISF). Zenabis, which more than doubled during the month, remains down almost 22% year-to-date. HEXO, the only other member of Tier 1 to outperform the sector during May, remains down 59% in 2020. MediPharm Labs was the only Tier 1 stock to decline during the month, though Canopy Growth and Radient both rose less than 10%.

The returns for the overall sector varied greatly, with 18 names posting double-digit (or triple-digit) gains, while 5 declined, with the entire group posting a median return of 11.0%, well below the 20.2% average return: 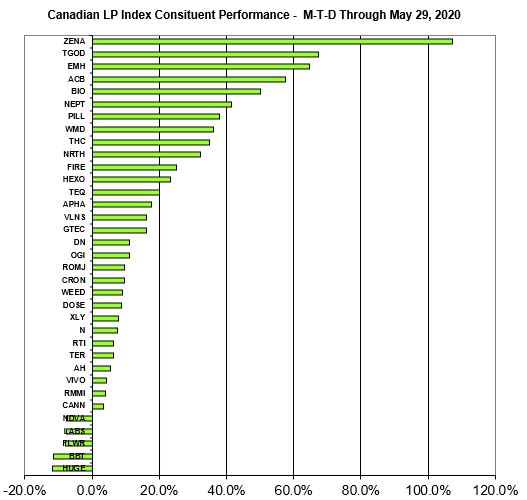 For June, the overall index will have 38 constituents, as CanadaBis (TSXV: CANB) returns and Lotus Ventures (TSXV: J) (CSE: LTTSF) and NextLeaf Solutions (CSE: OILS) (OTC: OILFF) join for the first time. Each of these will also be in Tier 3. Additionally, Aleafia Health has moved from from Tier 2 to Tier 1.