The Global Cannabis Stock Index fell for the 12th consecutive month, declining 1.1% to 28.31: 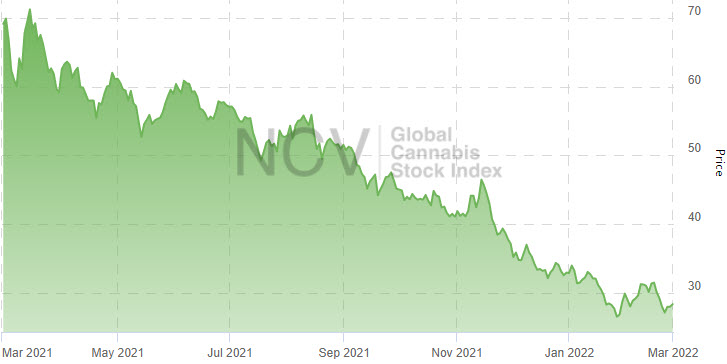 The strongest 4 names in February all gained at least 13%:

IM Cannabis bounced back from a rough January, when it was among the weakest names. Flora Growth, a $5 IPO last year, is now up in 2022 but down 59% since its IPO. WM Technology  rallied after its Q4 financial report, with revenue exceeded the analyst expectations. Cresco Labs has been the strongest Tier 1 MSO thus far in 2022, rallying nearly 5%.

The 4 weakest names in February all declined by more than 17%:

The three weakest names were from the ancillary sector, which has been pressured in 2022. Greenlane has declined 44.0% year-to-date, iPower has lost 37.0%, and Power REIT has dropped 30.0%. cbdMD fell sharply after reporting its Q1 financials and is down 20.4% in 2022.