Already down sharply through February, the Global Cannabis Stock Index extended its losses with a 24.9% decline during March, ending at 23.58 despite a bounce from record lows mid-month: 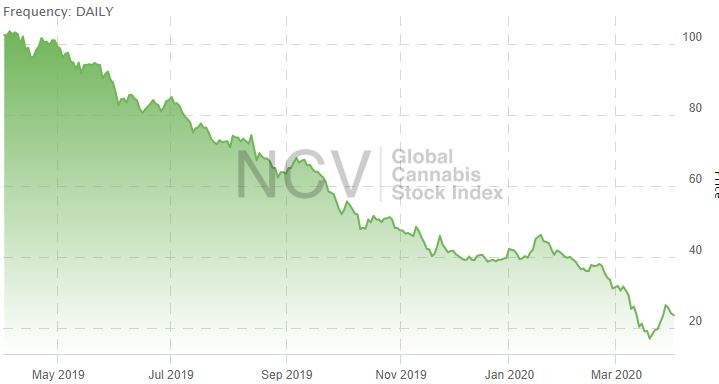 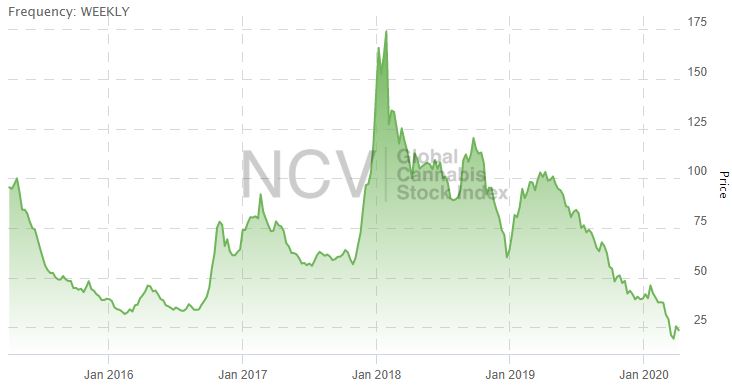 The strongest 4 names in March:

22nd Century Group is exposed mainly to tobacco, but it did announce an advance of its proprietary hemp/cannabis bioinformatics platform during the month. CannTrust was halted from trading after March 30th and hasn’t traded subsequently. The company has received short-term protection from creditors and plaintiffs in class-action litigation, and it is likely to be delisted from the NYSE. Despite an SEC investigation following a restatement of its financials as well as a disappointing Q4, Cronos Group held up well, buoyed by its large cash balance. Finally, Scotts Miracle-Gro pre-announced a strong March quarter, with its cannabis-focused Hawthorne division expected to post 55% growth from a year ago.

4 names that fell by more than 50% during March:

The worst performing names were all in desperate need of capital, with some of them accessing it on onerous terms during March. Green Growth Brands announced the potential sale of its CBD business but then totally shuttered it when COVID-19 distancing measures were enacted. Its cannabis operations in Nevada have been limited to delivery-only. The company has warned its investors that it may not be able to meet its near-term financial obligations, and its CEO resigned during the month. Sundial Growers is also struggling with its debt, and the company saw a sharp contraction in Q4 revenue compared to the prior quarter as its operating loss expanded. Harvest, which mutually terminated the large pending acquisition of Verano Holdings during the month, also priced an equity offering that weighed heavily on the stock. Similarly, Tilray sold stock with warrants at an all-time low at the time, though the stock was able to recover some of its losses after the transaction.

At the end of March, we rebalanced the index, which resulted in the removals of Aleafia Health, Auxly, Green Growth Brands, Green Organic Dutchman, Greenlane, MedMen, Supreme Cannabis, TerrAscend and Vireo Health and the additions of AYR Strategies (CSE: AYR) (OTC: AYRSF), cbdMD (NYSE American: YCBD) and Power REIT (NYSE: PW). Our qualifying standards changed slightly, with the minimum daily trading value reduced from $500K last quarter to $300K this quarter due to lower trading volumes across the sector.