Cannabis stocks, as measured by the Global Cannabis Stock Index, wiped out the rally from mid-August, declining 22.3% to 88.22 in October: 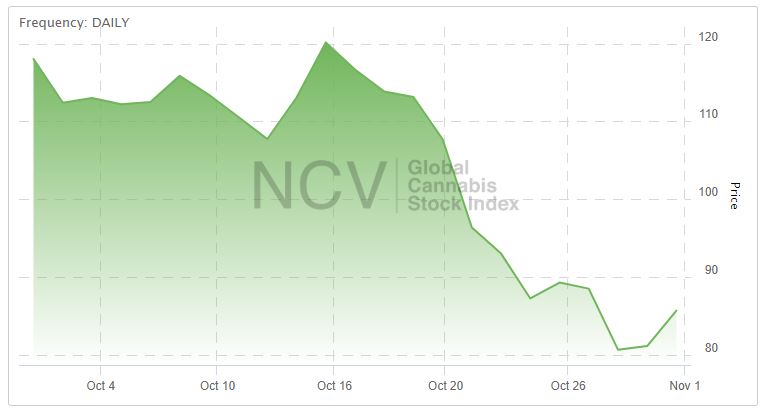 The index, which has 61 qualifying members after the rebalancing at the end of September, has declined 37.2% in 2018 despite the strength in Canadian licensed producers but is still up 56.9% from late October 2017, when the market ended a correction: 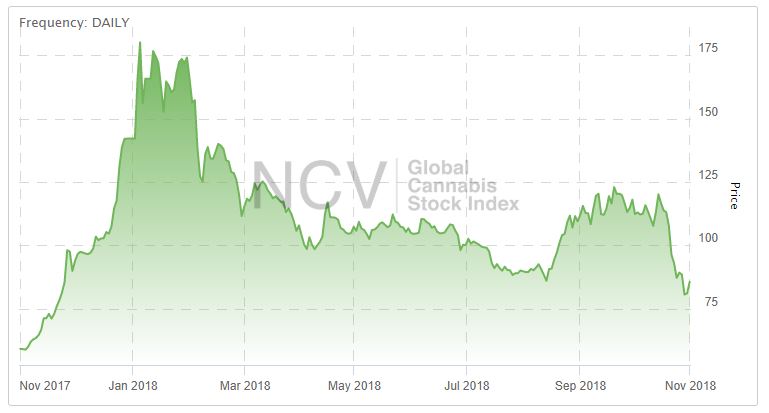 Despite the sharply lower prices, five names rallied, with two increasing more than 10%:

MedMen (CSE: MMEN) (OTC: MMNFF) led the index with a 29.3% gain. During the month it raised $94 million with a secured loan, entered the Arizona market, made an acquisition in Chicago, bought a license in Northern California and announced the $682 million pending acquisition of PharmaCann. Marimed (OTC: MRMD), which is up 546% in 2018, was the second best performer.

Fourteen stocks lost more than 1/3 of their value: 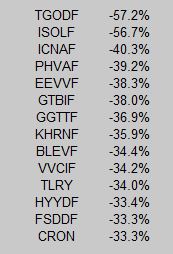 Most of the worst performers were Canadian licensed producers, which we detailed previously. Green Organic Dutchman (TSX: TGOD) (OTC: TGODF) and Isodiol (CSE: ISOL) (OTC: ISOLF) lost more than half their value as they posted 52-week lows. Green Organic Dutchman saw insider selling ahead of a lock-up expiration for pre-IPO private placement investors as well as selling by Aurora Cannabis (TSX: ACB) (NYSE: ACB). Green Thumb Industries (CSE: GTII) (OTC: GTBIF) declined 38% after having sold shares at C$20 in a bought deal in late September, ending the month at C$14.80. Tilray (NASDAQ: TLRY) lost 34% of its value, ending the month at 94.79, well above the $17 IPO price in July but far below the subsequent high price of $300 in September.

New Cannabis Ventures maintains six proprietary indices designed to help investors monitor the publicly-traded cannabis stocks, including the Global Cannabis Stock Index as well as the Canadian Cannabis LP Index and its three sub-indices. The six index, the American Cannabis Operator Index, was launched at the end of October and tracks the leading cultivators, processors and retailers of cannabis in the United States.