After extending upon September’s spectacular gains of 22.6% into mid-month and testing the highs from early 2018, the Canadian Cannabis LP Index sank 25.1% in October to 939.04: 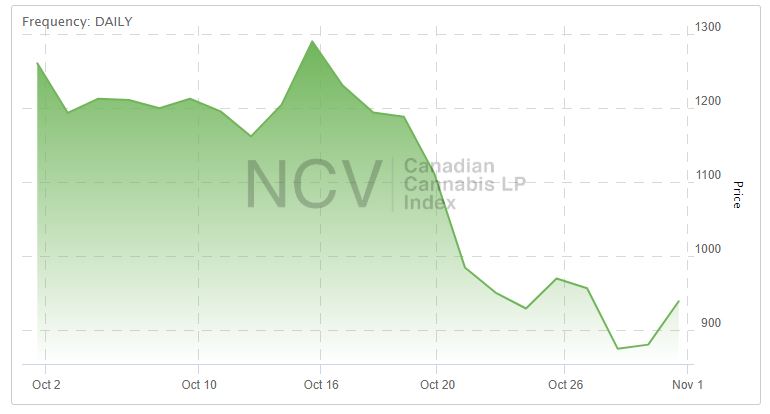 The index had run up from 2018 lows in mid-August after the announcement of the pending C$5 billion investment by Constellation Brands (NYSE: STZ) into Canopy Growth (TSX: WEED) (NYSE: CGC) ahead of the  legalization in Canada on October 17th. An increase in the supply of stock due to new LPs and capital raises from existing ones, disappointment in the initial roll out of legalization, a failure of deals involving Diageo and Coca-Cola to materialize and overall market weakness left the index down 6.5% in 2018, though still well above the August lows: 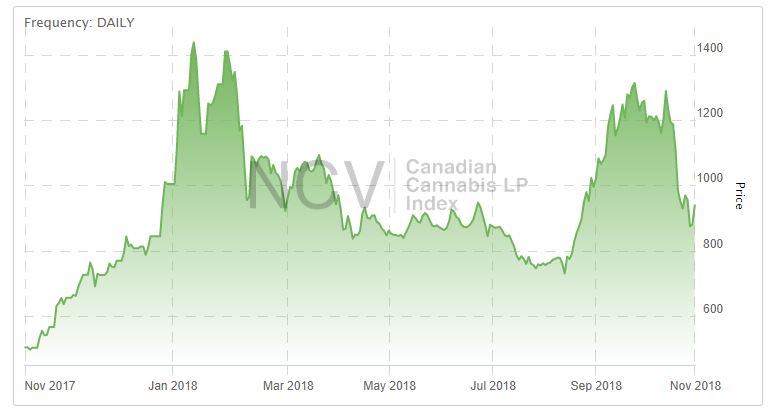 Tier 1, which includes the LPs that are generating sales of at least C$4 million per quarter, fell 22.8% in October and is now up 35.9% year-to-date. This group included Aphria, Aurora Cannabis, CannTrust (TSX: TRST) (OTC: CNTTF)  and Canopy Growth. Within the group, Aphria had the best return at -12.8%, though its -16.0% return is the lowest among the four year-to-date. Canopy Growth’s 62.8% year-to-date return leads the group.

Tier 2, which includes the remaining LPs that are permitted to generate sales, declined 26.0% and is now down 16.3% year-to-date. TerrAscend (CSE: TER) (OTC: TRSSF) posted a return of 42.2% after it announced its intention to commence operations in the U.S. Green Organic Dutchman declined 57.0%, with substantial insider selling ahead of lock-up expirations for investors prior to the IPO on November 2nd. Aurora Cannabis was also a seller of the stock after declining to exercise an option to buy shares at a 10% discount. Recent new issue The Flowr Corp (TSXV: FLWR) (OTC: FLWPF) fell more than 40%.

Tier 3, which includes the LPs that are licensed to cultivate but not yet approved to sell, fell 23.7% and is now up 2.2% year-to-date. The best performer from this group was MPX Bioceutical (CSE: MPX) (OTC: MPXEF), which declined 4.0%  and received a stock-based acquisition offer for its U.S. assets from iAnthus Capital (CSE: IAN) (OTC: ITHUF).  Canada House Wellness (CSE: CHV) (OTC: SARSF) performed the worst among the group with its 49.4% decline.

The returns for the overall sector varied greatly, with only TerrAscend increasing in value , while eight declined by more than 33%: 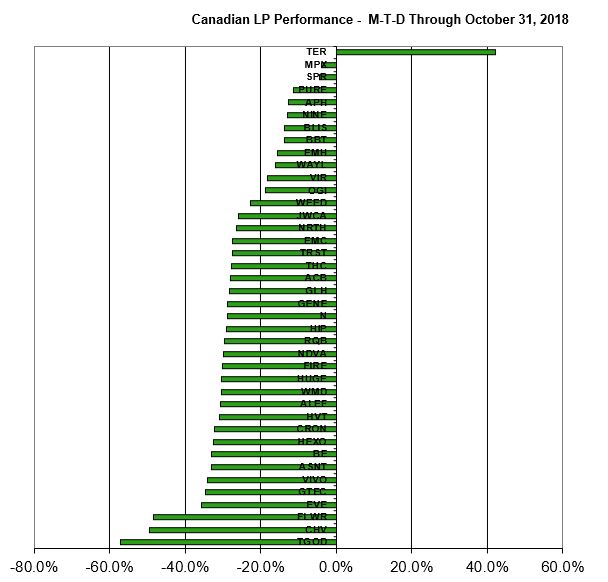 For November, the overall index had five additions, including Biome Grow (CSE: BIO) (OTC: ORTFD), Choom (CSE: CHOO) (OTC: CHOOF), Heritage Cannabis (CSE: CANN) (OTC: HERTF), MediPharm Labs (TSXV: LABS) (OTC: MLCPF) and Valens GroWorks (CSE: VGW) (OTC: MYMSF), all of which has been added to Tier 3. Readers should be aware that Tilray, with no Canadian listing, is not eligible for inclusion in the index, which is denominated in Canadian dollars.