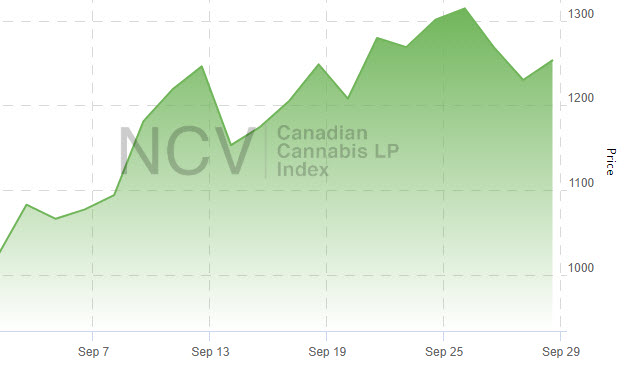 The market had reversed course in August after the announcement of the pending C$5 billion investment by Constellation Brands (NYSE: STZ) into Canopy Growth (TSX: WEED) (NYSE: CGC), and with legalization in Canada moving closer to the October 17th launch and additional multinational beverage companies on the prowl, including Diageo (NYSE: DEO) and Coca-Cola (NYSE: KO), interest in the sector expanded, leaving the index just short of the peak in January and up 24.7% in 2018:

While Tilray (NASDAQ: TLRY) is not in the index due to its lack of Canadian listing, its meteoric ascent and partial decline during the month was one of the sector’s biggest stories. Aurora Cannabis (TSX: ACB) (OTC: ACBFF) closed a $200 million bank debt deal with Bank of Montreal, the first large transaction of this type with a Tier 1 bank that shows the expanding access to capital. Cronos Group (TSX: CRON) (NASDAQ: CRON) agreed to invest up to $122 million in a collaboration to produce cannabinoids with biosynthesis, partnering with a U.S. company. Aphria (TSX: APH) (OTC: APHQF) divested its stake in Liberty Health Services (CSE: LHS) (OTC: LHSIF) and nominated new directors that will make its Board independent, moves that solidify expectations that it will soon list on a major exchange in the U.S. Aurora Cannabis has indicated that it will be doing so in October. CannTrust (TSX: TRST) (OTC: CNTTF) announced a $9.2 million investment from strategic partner, alcohol distributor Breakthru Beverage. International expansion remained a key theme, as Aphria closed its Latin American acquisition while Aurora Cannabis announced the pending acquisition of South-America focused ICC Labs (TSXV: ICC) (OTC: ICCLF). Finally, with prices picking up, the sector saw a jump in the number of financing transactions.

Tier 3, which includes the LPs that are licensed to cultivate but not yet approved to sell, rose 46.8% and is now up 33.4% year-to-date. Aleafia (TSXV: ALEF) (OTC: ALEAF), which received a sales license amendment as well as an above-market investment from the Serruya family, and FSD Pharma (CSE: HUGE) (OTC: FSDDF) gained more than 150%. The worst performers were Golden Leaf Holdings (CSE: GLH) (OTC: GLDFF) and MPX Bioceutical (CSE: MPX) (OTC: MPXEF), two U.S. operators that were down very modestly.

The returns for the overall sector varied greatly, with seven stocks increasing in value by more than 40%, while seven declined: 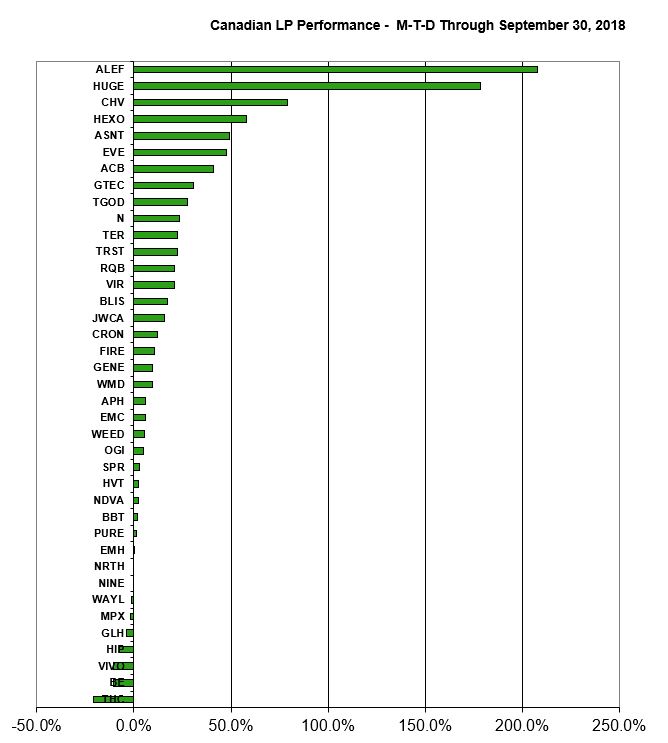 For October, the overall index had one addition, Flowr (TSXV: FLWR), which has been added to Tier 2. The company operates an indoor facility in British Columbia. Additionally, Aleafia, Benchmark Botanics (CSE: BBT) (OTC: BHHKF), Golden Leaf Holdings and Namaste Technologies (TSXV: N) (OTC: NXTTF) have moved up to Tier 2 following the amendments to their Health Canada licenses permitting them to sell. Finally, readers should be aware that Tilray (NASDAQ: TLRY), with no Canadian listing, is not eligible for inclusion in the index, which is denominated in Canadian dollars.