Cannabis stocks, as measured by the Global Cannabis Stock Index, fell again in July, declining 10.0% to 90.12 after posting a new 2018 low:

The index, which had 53 qualifying members that were equally weighted at the time of the prior rebalancing in June (now 52, after the removal on 7/26 of MedReleaf, which was acquired by Aurora Cannabis), declined 29.5% in the first six months of the year and has now decreased 36.6% in 2018. Despite the losses, the index is still up more than 58% since bottoming in late October.

Weakness among the Canadian LPs pressured the returns during the month. The index began the month with 71.7% of the composition in Canada, including 39.6% licensed producers. One stock listed on the Australian Stock Exchange accounted for 1.9%. 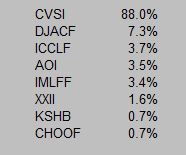 Nineteen companies posted declines in excess of 15%, with fifteen of them having primary listings in Canada, including 6 licensed producers, and one in Australia:

We criticized the accounting of PotNetwork Holdings (OTC: POTN) when it filed a Form 10 with the SEC during the month. After our report, the company withdrew its filing when its auditor lost its PCAOB certification.