Cannabis stocks, as measured by the Global Cannabis Stock Index, added to their August gains in September, rising 2.4% to 114.83: 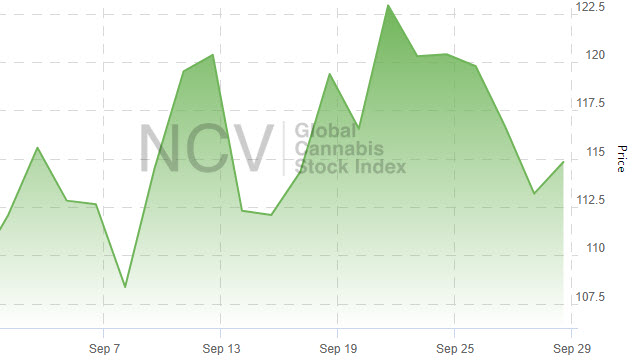 The index, which had 53 qualifying members that were equally weighted at the time of the prior rebalancing in June, had 51 members in September after the removal of MedReleaf in late July and the removal of Hiku Brands in late August due their acquisitions, has declined 19.2% in 2018 despite the strength in Canadian licensed producers but is still up 102% from late October 2017, when the market ended a correction: 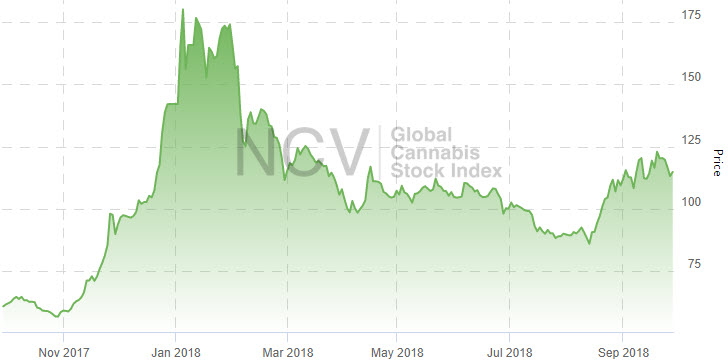 While the overall index didn’t change substantially during the month, seven names advanced more than 20%, with eighteen gaining more than 10%:

Scythian Biosciences (CSE: SCYB) (OTC: SCCYF) closed on the divestiture of its Latin American and Caribbean assets to Aphria (TSX: APH) (OTC: APHQF). Aphria divested its investment in Liberty Health Sciences (CSE: LHS) (OTC: LHSIF) but retained a five-year option to repurchase the stake, which the buyers can’t sell. Aurora Cannabis (TSX: ACB) (OTC: ACBFF) revealed that it is in discussions with Coca Cola (NYSE: KO) and also indicated that it will be listing on a major U.S. exchange in October. Namaste Technologies (TSXV: N) (OTC: NXTTF) received an amendment to its Health Canada license allowing it to commence sales of medical cannabis. GW Pharma (NASDAQ: GWPH) had its recently approved Epidiolex receive Schedule V classification from the DEA, allowing it to begin to sell the pharmaceutical. With the exception of Sunniva (CSE: SNN) (OTC: SNNVF), which raised capital during the month, the laggards are all what we consider to be lower quality companies.

In late September, we conducted the quarterly rebalancing, raising the bar a bit for qualification, including a hike in the minimum price of $0.10 to $0.25 and a minimum average daily trading value in excess of $600,00, up from $400,000. We also imposed a new constraint, with companies included in the index required to have at least $100,000 in average daily trading value in the U.S. ticker. The index will now include 61 companies, with 9 deletions and 19 new names.

Following the changes,  companies with Canadian primary listings or that operate in Canada represent 74% of the index, including 36% that are licensed producers in Canada. One Australian company represents 1.6%. Readers may be interested in a more detailed discussion of the index and its changes that is available to subscribers at 420 Investor.