Cannabis stocks, as measured by the Global Cannabis Stock Index, rallied sharply in August, climbing 24.4% after having set a 2018 low on August 14th:

The index, which had 52 qualifying members that were equally weighted at the time of the prior rebalancing in June after the removal of MedReleaf in late July, had declined 39.4% through mid-August before the pending Constellation Brands (NYSE: STZ) investment into Canopy Growth (TSX: WEED) (NYSE: CGC) announcement sparked a big rally. Through August, the index has declined 21.1% and is up more than 97% since late October 2017. 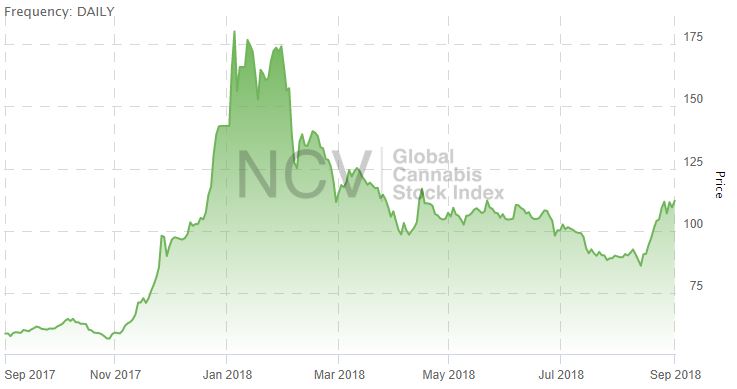 While Canadian LPs led the rally (see our detailed summary), strength was broad-based. The index began the month with 71.4% of the composition in Canada, including 34.4% licensed producers. One stock listed on the Australian Stock Exchange accounted for 1.7%. 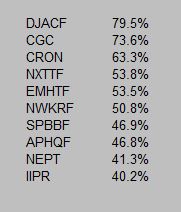 Hiku Brands (CSE: HIKU) (OTC: DJACF), which is merging with Canopy Growth in an all-stock deal, benefited from the Canopy Growth performance. Despite coming under attack from Citron Research, Cronos Group (TSX: CRON) (NASDAQ: CRON) managed to post a 63% gain. Most of the other top performers were Canadian LPs as well. REIT Innovative Industrial Properties (NYSE: IIPR) blasted to an all-time high during the month and has appreciated more than 125% since its late-2016 IPO.

Only six companies posted losses, with three in excess of 10%:

Scythian Biosciences (CSE: SCYB) (OTC: SCCYF), already in the middle of major transaction to divest its Latin American operations to Aphria (TSX: APH) (OTC: APHQF), had been halted from trading in Canada late July in advance of an announcement that it is acquiring a Florida medical cannabis license, which triggered a move from the TSX Venture to the Canadian Securities Exchange. The stock re-opened in Canada on August 15th down sharply and didn’t recover over the balance of the month. Isodiol International (CSE: ISOL) (OTC: ISOLF), which conducted a 10:1 reverse split in July, sold off sharply in late August in U.S. trading when regulators halted trading in the stock in Canada due to accounting issues.

We will summarize the index performance again in a month. Note that Hiku Brands was removed from the index at the close on Friday due to the pending finalization of its merger with Canopy Growth and the halt in the trading of its stock. You can learn more about the index members and the qualifications for inclusion by visiting the Global Cannabis Stock Index. Be sure to bookmark the page to stay current on cannabis stock price movements within the day or from day-to-day.