After plunging 13% in July and then extending the correction that began in January into mid-August, Canadian cannabis producers rallied sharply in the back half of the month, with the Canadian Cannabis LP Index increasing 34.2% for the entire month to 1022.02:

The recovery, which followed the announcement of the pending C$5 billion investment by Constellation Brands (NYSE: STZ) into Canopy Growth (TSX: WEED) (NYSE: CGC), leaves the index, which had been down 27.3% year-to-date through August 14th , up 1.7% in the first eight months of the year: 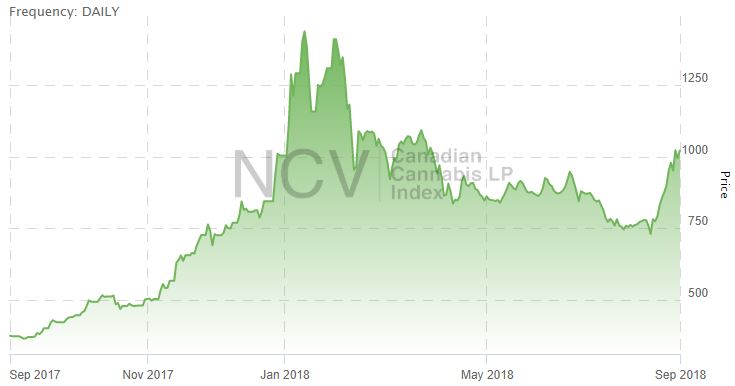 Beyond the news of the big investment by Constellation Brands, other important items included supply agreement announcements from Ontario and Nova Scotia as well as news that Ontario will be moving from a government-run distribution system to one that includes private retailers. The program, which is still being developed, isn’t expected to launch until April, with the province selling only online from October until then. Additionally, rumors that Diageo (NYSE: DEO) is on the hunt for an acquisition or strategic partnership fueled speculation. Finally, Invictus MD Strategies (TSXV: GENE) (OTC: IVITF) was able to lock down a $25.5 million debt financing at Prime plus 2% from ATB Financial to fund an expansion at its Acreage Pharms, another example of traditional financing opening up to the industry.

Tier 2, which includes the remaining LPs that are permitted to generate sales, rose 35.5%, its first positive return since January, and is now up 3.7% year-to-date. Hiku Brands (CSE: HIKU) (OTC: DJACF) was the best performer, as its stock tracked Canopy Growth, which is acquiring it for .046 shares of its stock for each share of Hiku Brands.  Cronos Group (TSX: CRON) (NASDAQ: CRON) reported record sales and rallied in excess of 60%. THC Biomed (CSE: THC) (OTC: THCBF) and 48North (TSXV: NRTH) (OTC: NCNNF) were the worst performers among the group.

Tier 3, which includes the LPs that are licensed to cultivate but not yet approved to sell, rose 27.8% and remains the weakest performer in 2018, down 9.1% year-to-date through the end of August. RavenQuest (CSE: RQB) (OTC: RVVQF) recovered a large portion of its year-to-date losses as it more than doubled. FSD Pharma (CSE: HUGE) (OTC: FSDDF) gained more than 64%. Two Tier 3 names, both relative newcomers to the public markets, declined, including Pure Global Cannabis (TSXV: PURE) (OTC: PRCNF) and Sproutly (CSE: SPR) (OTC: SRUTF).

The returns for the overall sector varied greatly, with eleven stocks increasing in value by more than 10%, while ten rose less than 10%, with three declining: 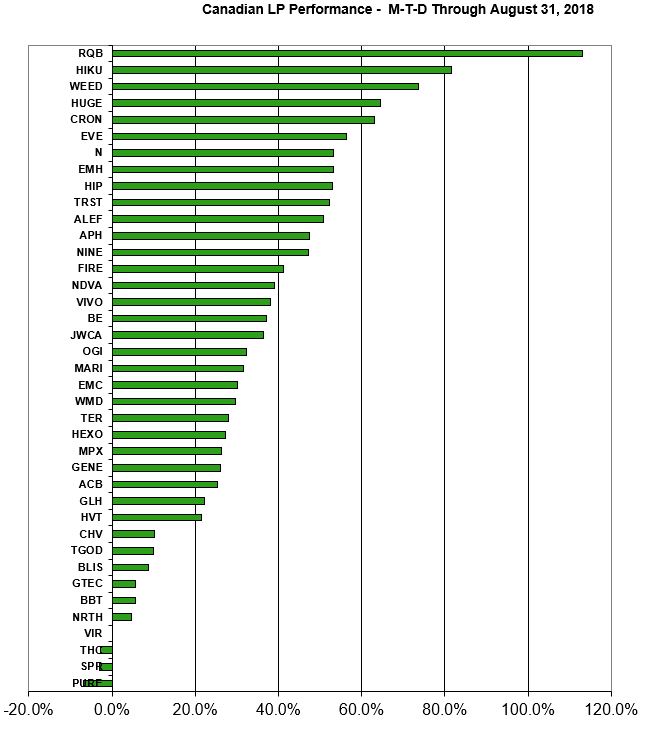 For September, the overall index had one addition, Ascent Industries (CSE: ASNT) (OTC: PGTMF), which has been added to Tier 3. The company operates in Canada as the owner of Agrima and has facilities in Oregon and Nevada. It has also submitted an application in Denmark. With its pending acquisition now finalized, Hiku Brands has been removed from the index. Additionally,  INDIVA (TSXV: NDVA) (OTC: NDVAF) and Viridium Pacific (TSXV: VIR) (OTC: VIRFF) have moved up to Tier 2 following the amendments to their Health Canada licenses permitting them to sell. Finally, readers should be aware that Tilray (NASDAQ: TLRY), with no Canadian listing, is not eligible for inclusion in the index, which is denominated in Canadian dollars.

In the next monthly review, we will summarize the performance for September and discuss any additions or deletions. Be sure to bookmark the pages to stay current on LP stock price movements within the day or from day-to-day.