We are pleased to report another solid quarter of positive yet disciplined momentum with record revenue and positive adjusted operating EBITDA as our strategic plan delivers on operating efficiencies from scale. Continued execution of key priorities such as the closing of Integral Associates, accelerated store openings, and expanded distribution of our brand portfolio sets us up well for the future.

We are deep in the chapter of maximizing the levers in our business to drive long-term operational performance that delivers value for our shareholders and the communities in which we operate. We are focused on optimizing our wholesale and retail businesses, integrating our acquisitions, and further strengthening compliance across the organization. We are pleased to see many of these efforts already bearing fruit as we head into the second half of 2019 and I want to thank our team for all of their hard work.

On May 23rd, GTI closed a $105.5 million senior secured non-brokered private placement debt financing through the issuance of senior secured notes (the “Notes”). The financing will be used for general working capital purposes, strategic growth initiatives, and to retire the Company’s existing debt. The Notes have a maturity date of May 22, 2022, and will bear interest at 12% per annum, payable quarterly, with an option, at the discretion of the Company, to extend an additional 12 months. The Company also has the ability to raise an additional approximately $45 million under the terms of this note six months from the initial date of close.

In the second quarter, GTI generated revenue from ten of its twelve markets: Nevada, Illinois, Pennsylvania, Massachusetts, Florida, Maryland, Connecticut, California, Ohio and Colorado. The Company also made capital investments related to the build out of new markets in New York and New Jersey, in preparation for revenue generation over the next six months.

Additional information relating to the Company’s second quarter 2019 results is available on SEDAR at www.sedar.com in the Company’s Interim Financial Statements and Management Discussion & Analysis (“MD&A”).

GTI refers to certain non-IFRS financial measures such as Earnings Before Interest, Taxes, Depreciation and Amortization (EBITDA), and adjusted operating EBITDA earnings defined as earnings before interest, taxes, depreciation, amortization, less certain non-cash equity compensation expense, including one-time transaction fees and all other non-cash items. These measures do not have any standardized meaning prescribed by IFRS and may not be comparable to similar measures presented by other issuers.

GTI will host a conference call on Wednesday, August 28, 2019 at 5:00 pm ET to discuss its financial results for the second quarter ended June 30, 2019. The conference call may be accessed by dialing 877-273-8145 (Toll-Free) or 647-689-5400 (International) with conference ID: 2278778. A live audio webcast of the call will also be available on the Investor Relations section of GTI’s website at https://www.gtigrows.com/investors and will be archived for replay.

Green Thumb Industries (GTI), a national cannabis consumer packaged goods company and retailer, is dedicated to providing dignified access to cannabis while giving back to the communities in which they serve. GTI manufactures and distributes a portfolio of branded cannabis products including Rythm, Dogwalkers, The Feel Collection, incredibles and Beboe, among others. The company also owns and operates rapidly growing national retail cannabis stores called Rise™ and Essence. Headquartered in Chicago, Illinois, GTI has 13 manufacturing facilities, licenses for 95 retail locations and operations across 12 U.S. markets. Established in 2014, GTI employs approximately 1,200 people and serves thousands of patients and customers each year. GTI was named a Best Workplace 2018 by Crain’s Chicago Business. More information is available at GTIgrows.com. 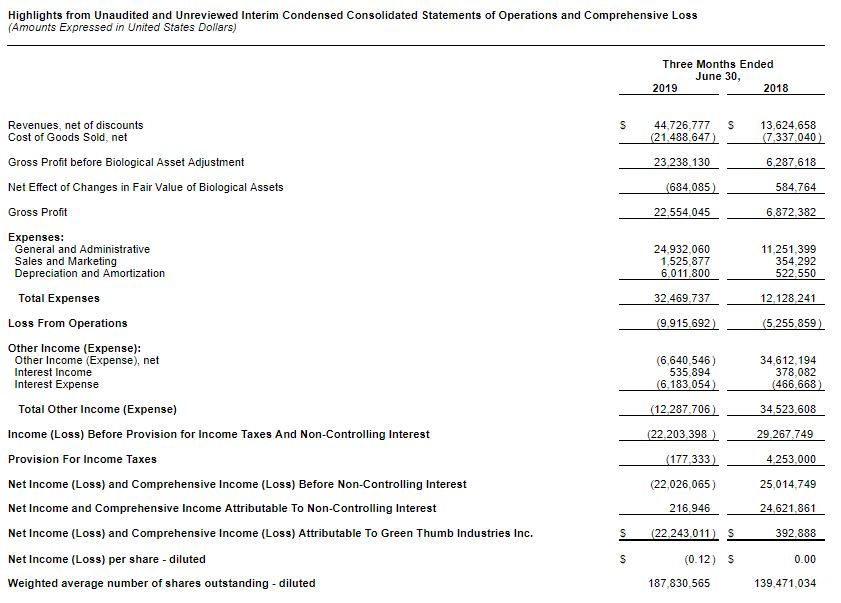