TransCanna Holdings (CSE: TCAN) (OTC: TCNAF), a relatively new California-focused cannabis company that began trading in January and promptly launched a very aggressive stock promotion campaign during the rally early in the year as its stock went from C$0.80 to almost C$8.00 after its C$0.50 IPO, announced an acquisition on Saturday, June 29th. The company intends to acquire Lifestyle Delivery Systems (CSE: LDS) (OTC:LDSYF) in an all-stock deal that would value the company at C$51.66 million. The deal, which still requires further negotiation, would be a relatively large one for Transcanna, as LDS shareholders would own 29% of the combined company. LDS currently owns 1.08 million shares of TCAN, and the press release indicates that “certain directors and officers of LDS own shares of TransCanna, and certain directors and officers of TransCanna may own shares of LDS.”

For TransCanna CEO Jim Pakulis, this pending transaction culminates years of involvement with LDS and its CannaStrips. Pakulis, before launching TransCanna, served for three years as President and Director of LDS. In a scheme from 2016, Pakulis, while employed by LDS, tried to market the CannaStrip through his penny stock, Wisdom Homes of America (OTC: WOFA), where he still serves as CEO (though this isn’t disclosed on the TransCanna website or its investor deck but is in its filing statement).

In April 2015, Pakulis, who was an early investor in WeedMaps (and tried to take it public), was talking up the prospects for Wisdom Homes of America, then focused on selling pre-fabricated homes. Less than a year later, the company issued five press releases in just a few months:

As promising as this may have sounded to penny stock traders, it apparently amounted to absolutely nothing. WOFA now trades at $0.0004, down 85% from when that first press release was issued in February 2016. Worse, the company hasn’t filed financials with the SEC or even OTC Markets since February 2013, so investors aren’t able to determine what happened with the licensing agreement the company heralded. The company just quit talking about it. Lifestyle Delivery Systems doesn’t mention WOFA in its filings.

A History of Stock Promotion

Pakulis, a veteran penny stock operator, engaged in an extremely aggressive stock promotion campaign after the TCAN IPO, as described in its filings. The MD&A for its quarter ending February 28th, filed in April, detailed the substantial investment in investor relations and stock promotion:

The company, which has never reported revenue and had just C$1.05 million in cash at 2/28 after its C$4.4 million IPO, altogether committed to spend approximately $954K on these activities. This disclosure omits $60K paid to CFN Media thus far in 2019 (per its disclosure on its website). The stock rose from its debut, fueled by a rallying market and likely aided by its tight float (just the IPO shares) and the aggressive stock promotion: 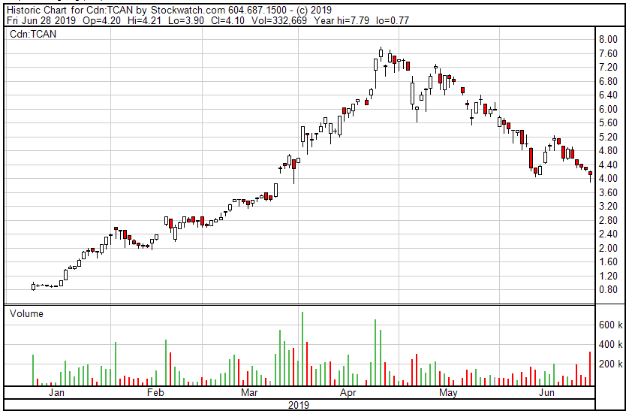 Lots of Shares Issued Well Below the Current Price

Following the promotion, the share price soared for TCAN, which enabled the company to sell 2 million shares at C$5 (along with C$6 warrants) in a deal announced in April that closed on June 7th. This financing is already underwater, but investors should be aware that prior financings were done substantially below the current price.

Additionally, the company sold 8 million shares in a private placement at C$2 along with 4 million C$3 warrants, raising C$16 million in a deal that closed  on April 4th. These shares and warrants are locked up until early August. Note that in addition to these warrants there are 1.68 million options and warrants at C$0.50, 3.48 million warrants at C$1.00, 219K options at C$1.37 and 640K compensation options at C$2.00 as well. In all, there are 30.6 million shares that could hit the float over the next five weeks with a cost of C$3 or less, far below the current price of C$4.10: 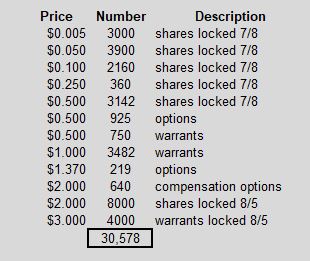 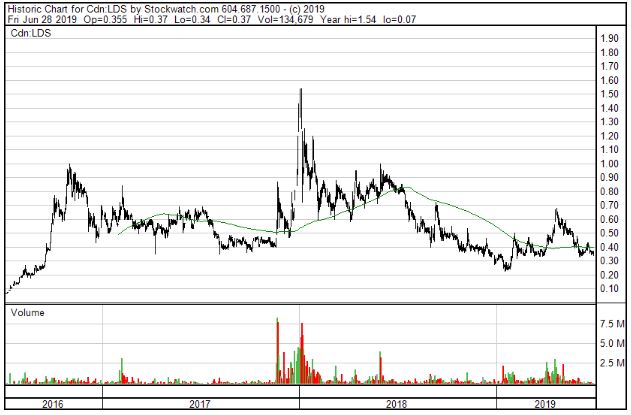 Given that the TCAN pre-IPO shares were all sold for less than C$0.25 per share, investors should expect pressure on the stock when this substantial number of shares becomes unlocked in early July. Compounding the potential sales from early investors is the unlocking a month later of the 8 million C$2 shares as well as the 4 million C$3 warrants. Another factor that could weigh on the stock is that the company is promising LDS shareholders the maximum of either 1 share of TCAN for each 10 LDS shares or C$51.7 million in its stock. This means that if the TCAN price were to fall, the company will need to issue more shares in order to close the deal.

The bottom-line is that TransCanna Holdings appears to have aggressively promoted its tight-float stock, helping it to raise capital, but investors must now deal with a lot of cheap shares about to hit the market. We don’t expect the potential acquisition of LDS to halt this inevitable selling pressure. In fact, we don’t expect that deal to close on the current terms.

Note: We updated the article on 7/1 to correct for the share exchange ratio being 1 share of TCAN for each 10 shares of LDS