We have reported all too often on Instagram deleting cannabis industry accounts. This past week, Dixie Brands, one of the best known premium marijuana infused products manufacturers, was yet another victim of the sudden shutdown.  CEO Tripp Keber said:

Joe Hodas, Chief Marketing Officer, suggested that Instagram wiped out its almost 6000 users with no explanation and provided no response to inquiries from the company. He stated that Lily Colley, who manages the company’s social platforms, had “put her heart and soul into substantially building that audience over the past year, and all that hard work was wiped out in one keystroke.”

Hodas suggested that Dixie Brands uses Instagram to promote community and to share content that is “respectful, lifestyle and community oriented” to combat canna-bigotry. He pointed to the ability to use a closed community like MassRoots as a safer alternative, but he said that “it requires multiple platforms to really reach critical mass.”

Speaking of MassRoots, its Instagram account was deleted last week as well.  We reached out to CEO Isaac Dietrich, who suggested that it would be restored early this week. MassRoots has a huge Instagram following, last reported by Awesomepova Research as having 369K followers, more than 4X the follower of Leafly. 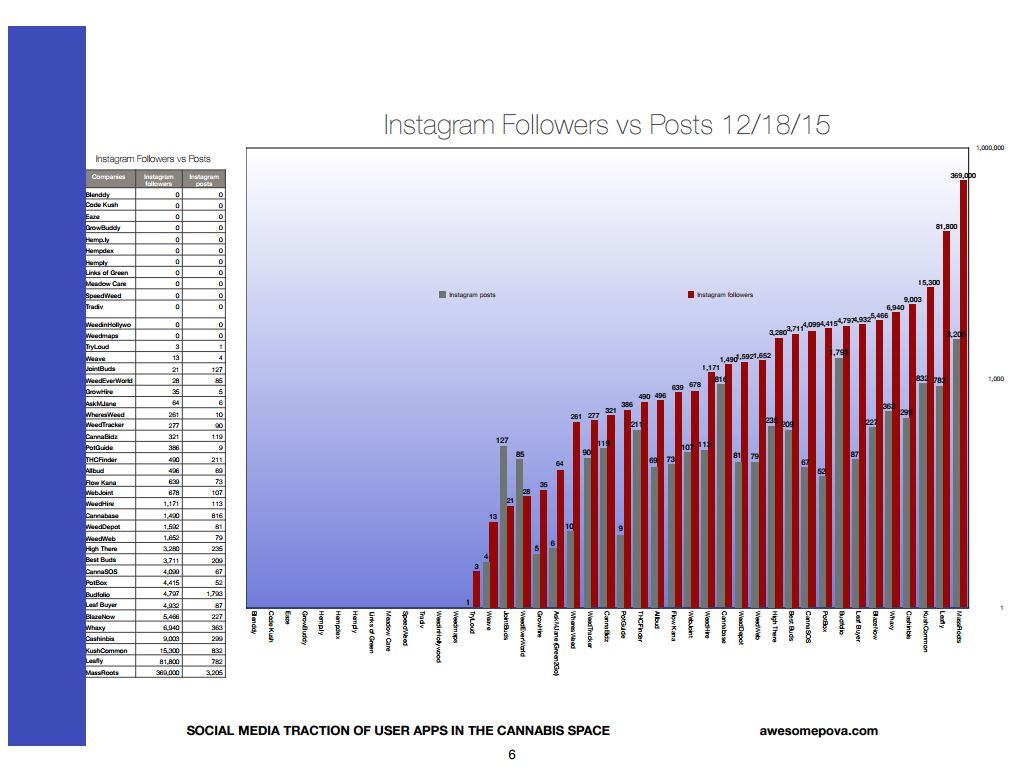 While Dixie’s Hodas is glad to be back on Instagram, quickly regaining over 10% of its lost following, Keber isn’t so sure.  At the Canna Awards late last year, he discussed the trials and travails of entrepreneurs in the industry, quoting Ben Franklin, “Either we must hang together, or surely we will hang separately.” Keber suggests:

Maybe we consider an industry wide boycott of Instagram

Hodas doesn’t think a cannabis industry boycott of Instagram would matter to the large company, but New Cannabis Ventures chooses to invoke the wise words of Martin Luther King:

Injustice anywhere is a threat to justice everywhere

The cannabis legalization movement has a strong voice, as proven by the recent Marijuana Majority petition to remove Chuck Rosenberg from his position as head of the DEA following his comments about medical cannabis being a “joke”.  The petition gained 150K signatures and led Representative Earl Blumenauer and several of his peers to send a letter to President Obama urging him to replace Rosenberg.

While it may not matter to Instagram, and it could hurt some companies that do benefit from having an account on Instagram, perhaps the cannabis industry should boycott Instagram on principle. At a minimum, the industry can hopefully convince Instagram to make its policies more clear.