After the close, Denver-based Leafbuyer Technologies (OTC: LBUY) disclosed that OTC Markets had inquired about recent stock promotion. The company, which offers online cannabis deals to consumers, has been using the services of MIDAM Ventures, the parent of MarijuanaStocks.com, to promote its stock since February, most recently this morning, when it sent out a blast email on the company’s behalf, suggesting readers check out an exclusive report about a company that “has started to turn heads.” The 8-page report included a disclosure in small font at the end (magnified for clarity):

Leafbuyer downplayed the payments, suggesting it had not paid the $475,000 suggested but rather only $225,000, which is an extraordinarily high amount nonetheless:

Given the weak and deteriorating financials of the company, the money being spent on stock promotion borders on sheer lunacy. In the most recent quarter ending March 31st, the company, according to its SEC filing had sales of only $287,224, which resulted in a loss of over $1 million. So far in the first three quarters of its fiscal year 2018, the company has seen sales grow only 9.9% to  $785,969, generating a loss of almost $1.3 million compared to a loss of just $36,257 in the first three quarters of the prior year. Leafbuyer’s operations have consumed $881,690 so far this fiscal year. The cash portion of the MIDAM stock promotion represents over 28% of the company’s sales so far in fiscal 2018.

Leafbuyer also downplayed the impact of the stock promotion, suggesting  that the stock has declined substantially since it began the promotional efforts in February: 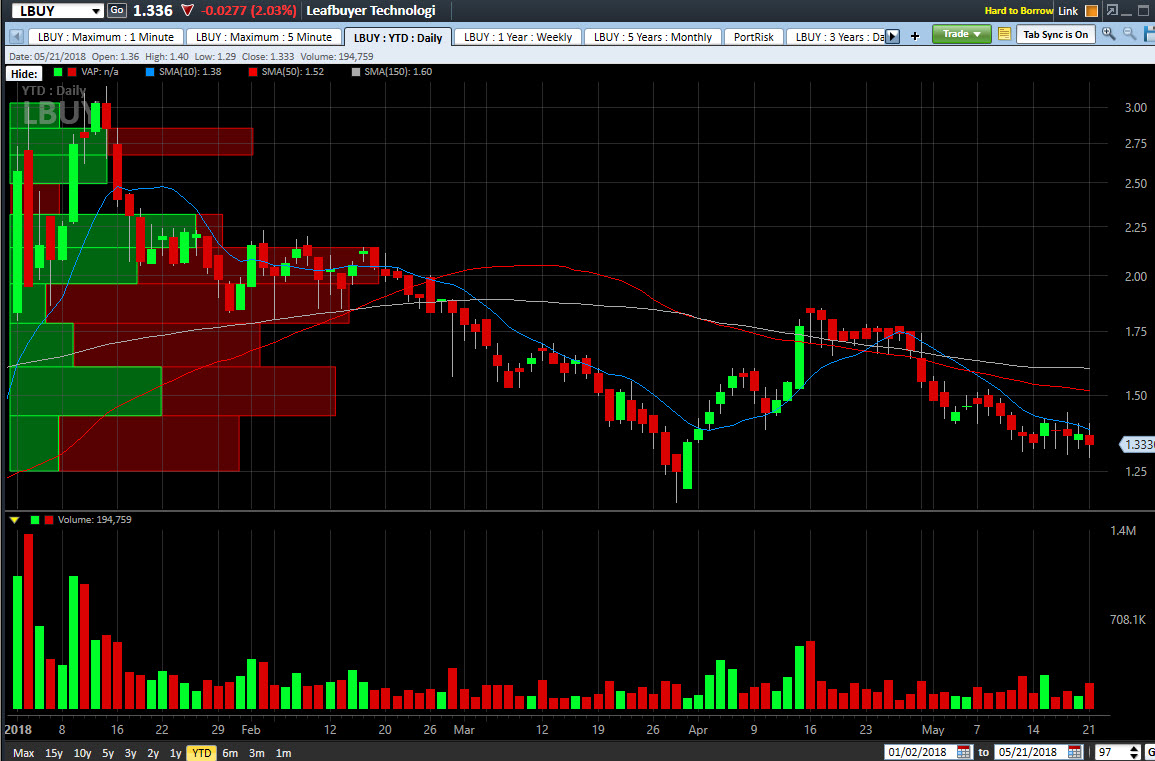 The company has been the subject of additional stock promotion, with Bonita Equity paying “up to $177,000” earlier this year and beginning in September of 2017 for stock promotion of Leafbuyer, including this advertorial. Additionally, the stock promotion at MarijuanaStocks.com didn’t begin in February 2018. Rather, a third-party, Full Service Media, paid the promoter $20,000 in August 2017.

Investors should question why the company has been so promotional, as the business certainly appears to be real though not financially stable. Leafbuyer had 41.2 million shares outstanding as  of May 16th, giving it a market cap of about $55 million, but the share-count masks a particularly onerous convertible preferred stock that gives owners 55% of the company upon conversion. This means that theoretically there could be 91.5 million shares, which would boost the market cap to almost $122 million. Not surprisingly, the company has been selling stock at a big discount to the quoted price:

During the nine months ended March 31, 2018, the Company accepted subscription for the issuance of 1,057,500 post-split common shares for total subscriptions of $470,000 in cash.

The stock sales have been on average at $0.444 per share, while the very low price on the stock during that time has been $0.861.