Confirming reports of the ouster of founder Isaac Dietrich as CEO, MassRoots (OTC: MSRT) issued an 8-K filing this morning. The company confirmed that Scott Kveton, who was serving as Vice President previously after joining when MassRoots acquired Odava, a firm he co-founded in Oregon, has been named CEO.

On Tuesday, Dietrich and MassRoots entered into a Separation Agreement that calls for Dietrich to be paid four months of salary at $7,916.66 per month and to receive four months of paid premiums for health insurance. He is also required to repay the company up to $25,000 in expenses should the company find that they shouldn’t have been submitted.

Dietrich’s agreement requires him for a period of three years to “standstill”. Specifically, he is not permitted to acquire assets of the company or even buy more shares, and he is prohibited from taking any actions to influence management of the company.

Following reports of the change in management on Monday afternoon, MassRoots stock plunged to an all-time low of $0.23 before closing at $0.29: 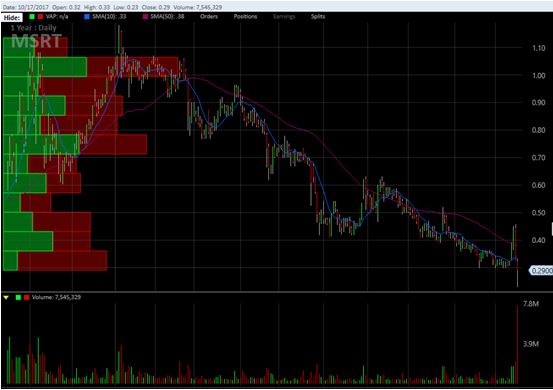