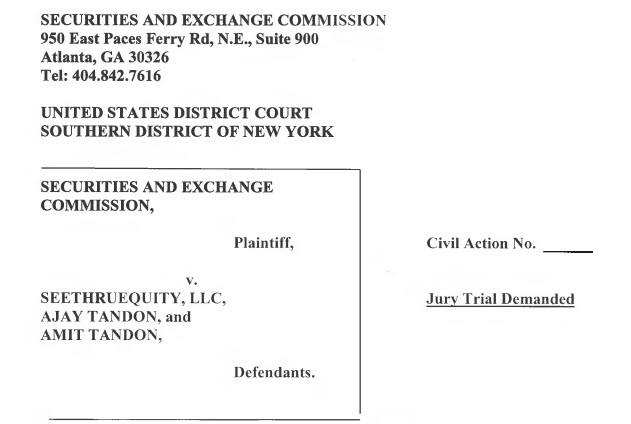 While it marketed itself as “unbiased” and independent, SeeThruEquity LLC, a New-York based stock research firm founded in 2011, and its principals, brothers Ajay and Amit Tandon, have been accused by the SEC of fraud. The complaint alleges that the company said its research was “not paid for” when it was and that it allowed issuers to have input into target prices at times. The agency also accuses the brothers of instructing analysts to use higher price targets. The company, according to the SEC, had price targets typically more than 300% above the stock price at the time of the report. Finally, the SEC has accused the Tandons of trading in the stocks of their clients while failing to disclose positions and often front-running the bullish research reports by purchasing the stocks and then selling them upon the publication of the glowing reports.

While the complaint didn’t reference the numerous cannabis stocks that the Tandons have issued research reports on, SeeThruEquity issued glowing reports for many low-quality cannabis penny stocks over the past few years, including Axim Biotechnologies (OTC: AXIM), Chinese Investors (OTC: CIIX), Earth Science Technology (OTC: ETST), MassRoots (OTC: MSRT), PotNetwork Holdings (OTC: POTN), Sugarmade (OTC: SGMD) and Tauriga Sciences (OTC: TAUG). Many of these companies are not included on the company’s website as part of their research universe, which appears to be not well maintained. One company that was recently delisted by the NYSE American, India Globalization Capital (OTC: IGCC), has been the subject of multiple glowing reports. In August, SeeThruEquity initiated coverage on Canadian licensed producer WeedMD (TSXV: WMD) (OTC: WDDMF) with a target of C$3.50, 150% higher than the price at the time.

The suspension occurred on the  same morning as SeeThruEquity issued a report on the company, suggesting that the stock’s price target should be $3.50, though it’s not clear if the two are related. The report disclosed a payment to SeeThruEquity from the company of $1950. The company appears to have changed its disclosure practices earlier this year, and the SEC notes that the period in which it claims the reports failed to disclose payments was from November 2013 through March 2018.

The SEC is seeking permanent injunctions against SeeThruEquity and the Tandons as well as the disgorgement of ill-gotten gains.