Last week, MassRoots (OTC: MSRT) announced its third acquisition to date and its largest by far, acquiring CannaRegs for 30mm shares in a deal it valued at $12mm. In December, it purchased Whaxy for $100K and the issuance of almost 3mm shares, while more recently it bought Odava for 5.825mm shares, including 2.6mm shares awarded to the founders as part of their continued employment.

MSRT stock advanced in the two days after the release of the news to $0.479 (from $0.42 on 8/23) on heavy volume, but it’s important for investors to understand the full extent of stock promotion that coincided with the announcement of the deal. MassRoots continues to be one of the more promotional stocks in the sector, with some of it from third-parties but a great deal of it from the company itself. Stockpromoters.com indicates a significant amount of stock promotion following the deal, with 11 promotions reported since the deal was announced and : 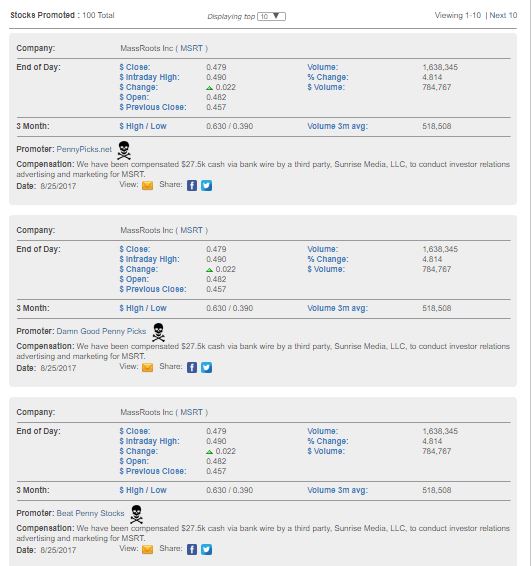 While the stock promoters are busy telling everyone what a great deal this is for MassRoots, perhaps driving the price higher, it looks to be a last-ditch effort by a failed technology company that is rapidly losing its ability to fund itself. MassRoots overpaid for CannaRegs in our view, and investors should be cautious, especially until additional capital has been raised.

MassRoots went public in early 2015 and had good access to capital until a disastrous convertible note deal in 2016 that was addressed by the sale of 10mm shares at $0.50 with $0.90 warrants a year ago. Despite having some cash in its coffers at the beginning of the year and promises of positive cash flow from operations that never materialized, the company reported terrible financials in Q2:

On Friday, August 19th, days before the CannaRegs deal was announced, the company sold toxic convertible notes and issued warrants at just $0.50, raising $950K. This follows a July financing that was materially worse than the 2016 financing, with the company selling shares at $0.50 with warrants at $0.65 to raise $1.217mm.

While the $2.2mm has kept the lights on, this amount represents only about one quarter of operating losses. With the addition of Odava and CannaRegs, the operating expenses may be difficult to trim. MassRoots clearly needs to raise more capital before year-end.

In addition to raising new capital through equity, warrants and toxic debt, MassRoots has benefitted significantly from the exercise of warrants. Through June, this has provided over $4.7mm in cash to the company, but the stock would now have to rise substantially to trigger further warrant exercises. Warrants below the current stock price, if exercised, would raise only $115K (287,500 at $0.40). The table below, through 6/30, excludes the $0.65 warrants and the $0.50 warrants issued subsequent to Q2.

Since the 10-Q, MassRoots has raised the $950K described above, but it is expecting the warrant exercises to help fill a very big gap:

We expect to need to raise at least $5,000,000 over the next year to continue to fund operations; however, we expect to raise a majority of these funds through warrant exercises.

Don’t believe it! The company has historically underestimated operating expenses and overestimated potential revenue. In November 2016, after having raised $5mm by selling shares at $0.50 with warrants at $0.90, it stated in its 10-Q for the quarter ending 9/30/16:

It is anticipated that the proceeds from the sale of its common stock and warrants and from the warrant exercise will provide the Company with cash sufficient to fund operations through August 2017.

Required Capital Over the Next Fiscal Year

We believe MassRoots has sufficient capital to reach cash-flow positive.

Of course, this proved to be a horrible forecast by management. MassRoots has never had a handle on its finances, and there is nothing to suggest that it does at this point either. The bottom line is that the company is significantly undercapitalized, and its plan appears to be for the stock to rally so that warrants get exercised.  Instead, it is likely that it will have to raise capital yet again, and this follows a really nasty stop-gap toxic convertible debenture deal done just before the CannaRegs deal was announced.

CannaRegs appears to fit strategically into the new MassRoots business model, as the company has become focused on being a compliance software provider after the purchase of Odava, a startup seed-to-sale software company. CannaRegs operates a recurring revenue model (subscriptions) and has more than $450K revenue under contract. CannaRegs stays on top of regulatory changes in state and local markets for its customers, but the overlap with the MassRoots advertising base and the Odava targeted market may be small, as CannaRegs serves a broader audience, including regulators, attorneys, market research firms and industry consultants. Positively, MassRoots has known CannaRegs for three years now, as founder Amanda Ostrowitz won the Marijuana Tech Startup Competition, hosted by MassRoots, in Denver in September 2014. 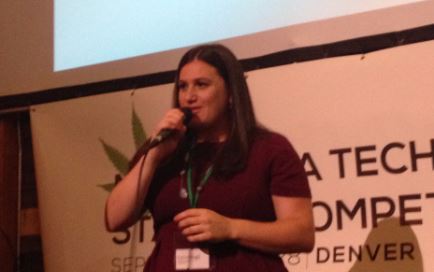 During the conference call on 8/23, Ostrowitz indicated that she expects the MassRoots sales team to help her expand, but this seems like a bit of a stretch, as MassRoots has never generated significant sales. Through H1, MassRoots has posted sales of just $278K.

The 30mm shares to be given to the owners of CannaRegs (detailed in this 8-K filing with the SEC), valued at $12mm, represents a multiple of over 26X current sales, a seemingly steep price to pay for the company. This also excludes an additional 7mm shares and 3mm options that can be used as incentives for current or future employees. MassRoots shared only the sales metric and didn’t share any others, like cash flow or net income. It also didn’t share any sort of financial outlook in its press release and SEC filing or on the conference call. It never justified the valuation either.

There have been an increasing number of deals by publicly-traded in 2017, and many of them were on substantially better terms. Just this week, General Cannabis (OTC: CANN) announced a deal to acquire Mile High Protection Services in a stock deal valued at $350K for a company that it says generated $570K sales in 2017 through July. Medicine Man Technologies (OTC: MDCL) bought Denver Consulting Group in a deal announced in May, paying $3.5mm in stock for a company that generated $450K in the first quarter of 2017. A final example is Kush Bottles (OTC: KSHB), which bought CMP Wellness for $20mm, mainly in stock. In the two quarters ending 2/28/17, CMP Wellness reported sales of $4.5mm, suggesting a purchase price of about 2.2X sales. While a SaaS business model may justify a higher multiple, 26X is significantly out of line with these other examples, and MassRoots management provided no justification for paying $12mm.

MassRoots has been an epic failure in the cannabis space to date, never living up to the promise of providing a real alternative for retailers to Weedmaps or Leafly and unable to to get even a tiny sliver of market share with dispensaries despite building a large audience of consumers. The company is trying to reinvent itself as a business software company, a much more crowded space. In Odava, it acquired unproven technology with no substantial revenue, but with CannaRegs at least the company has picked up its installed customer base. Unfortunately, the company paid way too much for the acquisition. While MassRoots now has a perhaps a more compelling story to tell, its challenging financial position requires it to raise capital again in the very near-term. With the stock near an all-time low and trading below prior capital raises but at a very high market cap due to all of the share issuances (134mm shares outstanding at $0.479 is $64mm), MassRoots is likely to struggle in the capital markets as it tries to raise additional capital.

This Tech Company is Working with Major MSOs and 7,000 Mainstream Brands

The Next Five Years for the Cannabis Industry