MassRoots (OTCMKTS:MSRT) surged almost 23% today, with the 1.61mm shares traded setting a record.  Over the past year since it began trading on April 9, 2015, the prior high volume had been on September 8th, when it traded 1.068mm shares and, before that, on April 20, 2015, when the stock briefly traded above $7 at what proved to be an all-time high, with 1.063mm shares trading. 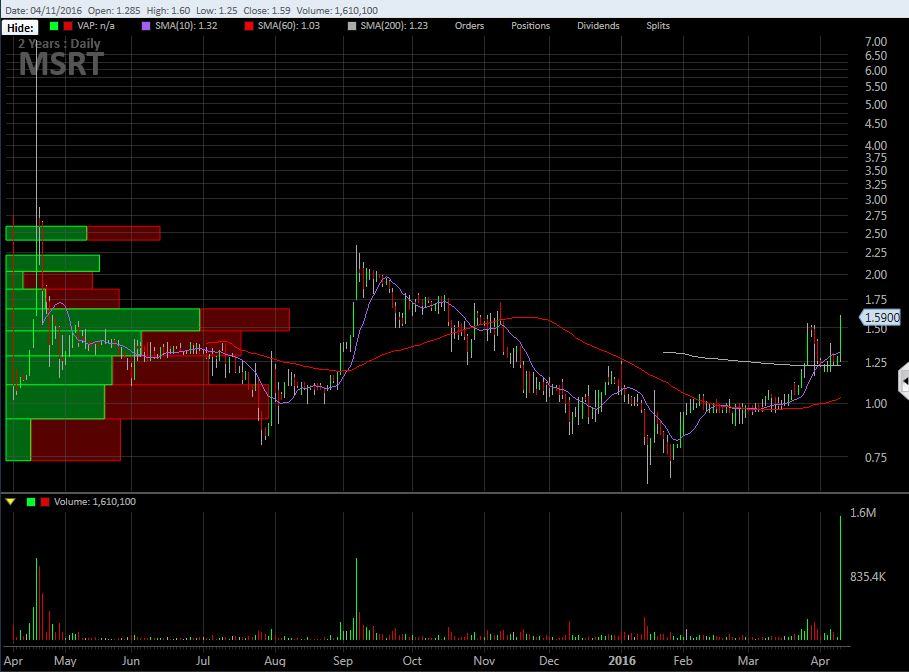 The company filed an S-1 preliminary prospectus with the SEC before the open of trading, indicating it intends to use Chardan Capital Markets to raise up to $6.5mm via the sale of stock (and warrants). The company had last filed an S-1 in 2015 but the deal that was priced in November was self-underwritten (no broker used). What excited investors potentially is that MassRoots, for the first time, indicated that it had actually filed an application with NASDAQ to list on the exchange (see page 4).  The company had previously announced its intention to uplist to the NASDAQ in late August, but, until now, it was perhaps unclear if the company was still engaged in the process.

CEO Isaac Dietrich, presenting at the Cannabis Investing Virtual Event on March 30th, had reaffirmed the goal, suggesting it hoped to achieve a NASDAQ listing in 2016.  He had said then that the main requirement remaining for qualification was $5mm in equity on its balance sheet ($316,737 as of 12/31/15), which he suggested could be achieved by selling stock.  The company upgraded its corporate governance in late 2015 to comply with NASDAQ requirements. The company’s 10-K filing in late March had not provided an update on its efforts, nor had the company issued a press release regarding the NASDAQ uplisting effort at any point since the original announcement.

While MassRoots has filed with the NASDAQ, it’s not clear if the exchange will allow it to list there.  In 2013, NASDAQ welcomed GW Pharma (NASDAQ:GWPH), but it was already trading on the London Stock Exchange and was applying for a dual listing.  There is no official policy statement from NASDAQ, though given that the MassRoots has customers that are clearly breaking federal law (though complying with state laws) it is possible that NASDAQ could hinder the company.  MassRoots has previously suggested that if the NASDAQ is not amenable to listing the company, it intends to apply to the NYSE MKT, the New York Stock Exchange’s market for small-cap companies (formerly the American Stock Exchange).

MassRoots has been successful with two prior S-1 filings going effective with the SEC, so investors should expect this filing to pass muster, but the timing is uncertain.  The company’s last S-1 was filed initially on 9/3/15, and, after several amendments, want effective on 11/4.  Given that the company filed April 11th, it is possible that the SEC could allow it to go effective before May 16th, when the company’s next quarterly filing is due, but, if not, MassRoots could see a delay as it is required to amend the S-1 again to reflect the most current financial data.

In addition to uncertainty regarding the willingness of NASDAQ to allow MassRoots to list as well as the timing of the company being allowed to sell stock, investors face uncertainty regarding near-term fundamentals.  The company reported sales of just $140K in Q4, well below the estimate of its sole Wall Street analyst, Chardan Capital, which forecasts $510K sales in Q1.  The company reports “total registered users” and has provided an estimate of crossing 1mm this month, but it hasn’t provided an update since January, when it reported 775K.  The monthly addition of users has slowed from its pace of 60-70K per month last summer to 50K: 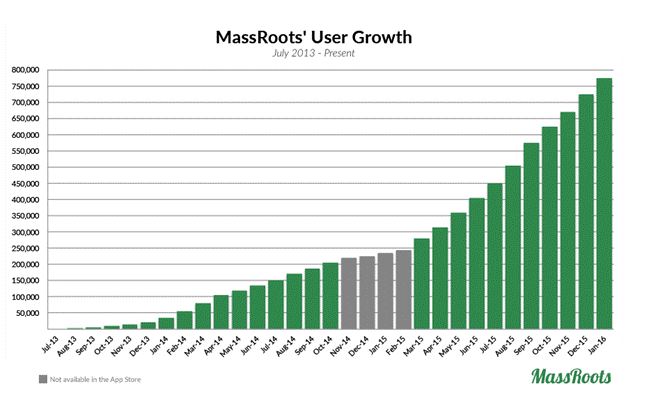 In order to reach its goal of 1mm by 4/20, the company needed to add 225K in less than 3 months, which would mark an acceleration from the recent pace.

Attaining a NASDAQ listing would be quite an accomplishment for the young cannabis technology company, enabling it to dramatically expand its base of potential investors. Today’s news affirms that the process to do so remains ongoing and sets in place a mechanism to help the company achieve one of the last remaining listing requirements of having sufficient equity on its balance sheet, but it’s not yet clear that MSRT will actually accomplish its goal to move to the NASDAQ.