As we described in an earlier article, the Global Cannabis Stock Index closed in June at its worst level ever, falling 23.1% and moving to a drop of more than 55% in 2022. In this exclusive article we will summarize the performance of the other managed indices that New Cannabis Ventures offers to its readers. We will discuss the performance of the American Cannabis Operator Index, Ancillary Cannabis Index and Canadian Cannabis LP Index as well as Canadian Cannabis LP index Tier 1, 2 and 3.

The American Cannabis Operator Index fell 25.1% in June to 20.85. Its mainly MSO base is very beaten up, falling more than the broad market. 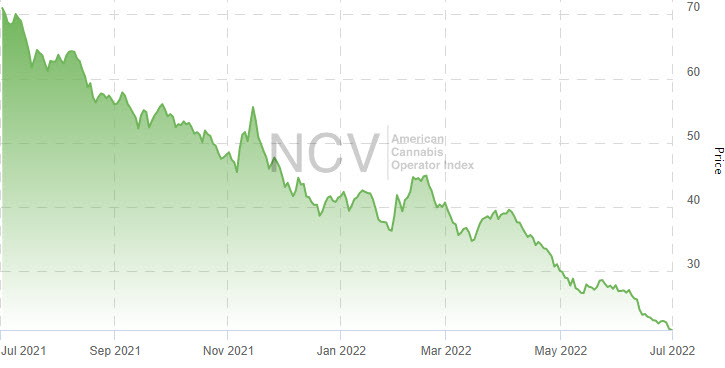 While the Global Cannabis Stock Index took out the prior lows from March 2020, this one has held those levels:

During June, the strongest performer was Charlotte’s Web (TSX: CWEB) (OTC: CWBHF) at -3.7%, while the weakest names was TerrAscend (CSE:TER) (OTC:TRSSF) at -43.0%. For July, the number of members of the index has declined substantially due mainly to low trading volumes in June. The index now has 13 names, down 8 from last month.

The year-to-date performance has been very weak, with the index down more than the overall market, falling 59.7%:

The index is down more than 79% since launching 15 months ago:

The index included 14 names, but 4 didn’t qualify for continued inclusion: Agrify (NASDAQ: AGFY), Akerna (NASDAQ: KERN), Power REIT (NYSE American: PW) and urban-gro (NASDAQ: UGRO). All of these stocks had insufficient trading volume during June. During the month, Akerna (NASDAQ: KERN), which did a desperate financing round, fell the worst at -65.5%. The winner in this group was CEA Industries (NASDAQ: CEAD), which scored a 1.6% gain.

The final part of the market for which we have a series of indices is the Canadian LP space. The Canadian Cannabis LP Index fell for the twelfth consecutive month, declining 19.5% to 95.40 in June. 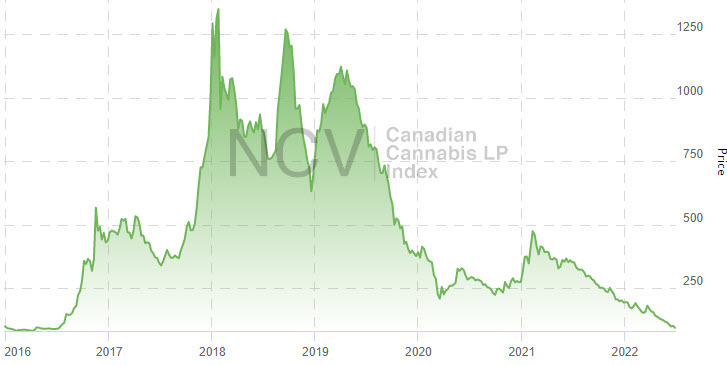 Many LPs don’t qualify to be in the index. At the end of the month, we removed Neptune Well Solutions (TSX: NEPT) (NASDAQ: NEPT) due to its plans to stop serving the cannabis market in Canada. We added back Canadabis Capital (TSXV: CANB) due to its sales lifting above C$2.5 million. It will be part of Tier 3.