While cannabis stocks are performing well, 8 of the 26 names in the index are down so far, including a double-digit percentage loss in the very large Innovative Industrial Properties, which revealed this week some issues with a few tenants. Among the 7 remaining decliners, 5 are American multi-state operators, including 4 of the 5 large ones. Only Cresco Labs of the top 5 in terms of revenue is up so far, and its merger partner, Columbia Care, has dropped over 3% as the spread to the deal ratio of .5579 shares of Cresco Labs for each share of Columbia Care has moved to a massive discount of 33%. Canadian LP Cronos Group has dropped almost 2%, while biotech company Jazz Pharma has dipped a little more than 1%.

On the other hand, 11 of the 26 members are up more than 10%. This group is quite diverse, with 6 Canadian LPs, 3 ancillary companies, 1 MSO and 1 biotech company.

Two weeks ago, we shared our concerns with two factors, the low volume, which persists, and redemptions at the large AdvisorShares Pure US Cannabis ETF (NYSE Arca: MSOS), which has suffered additional reductions in the shares outstanding and has closed fairly regularly at a discount to its net asset value. In the past five weeks, the number of shares outstanding has dropped by 10.7% to 61.39 million. We warned readers here that the ETF is overly concentrated in the 5 largest MSOs three months ago when it had 74% of its exposure there. Now it is over 79%. The ETF has declined 28.0% since that article, and is down 2.3% so far in 2023. Cresco Labs, a 7.9% position currently, is up, but its four largest positions, which make up 71.4% of the ETF, are all down: 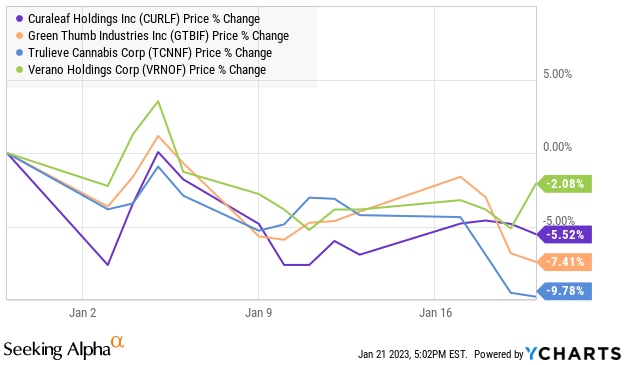 The MSOS ETF is a big bet on these four stocks, which are not performing well thus far. If the ETF continues to receive redemptions, it will need to sell those stocks. During this month, it exited Hydrofarm, which rallied sharply afterwards and is up more than 10% year-to-date now.

We are excited to see the improvement in cannabis stock prices, but we remain concerned with some of the dynamics 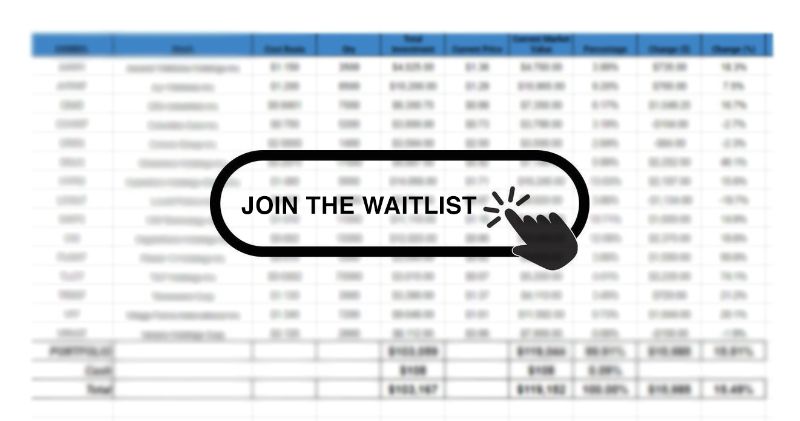 Premium subscription service 420 Investor will soon be restarted on Seeking Alpha after leaving Benzinga’s Marketfy at the end of 2022. To follow Alan’s performance and activity until the new service goes live, join the waitlist. By filling out the form today, you will receive Alan’s current model portfolio holdings.

Read the written summary or watch the recorded webinar of the New Cannabis Ventures hosted webinar with multi-state operator TerrAscend from January 19th. For our readers, we also included an easy-to-read Q&A from all three executives that cover the company’s operations and future.

NorCal Cannabis Company ultimately wants to become a CPG flower powerhouse, according to its leadership team. In an exclusive interview, Co-founders and Co-CEOs Jigar Patel and Douglas Cortina discussed the evolution of the company’s business model, how the company has navigated a challenging California marketplace, as well as plans for future growth. Looking ahead, Cordina said revenue expectations are in line with last year’s numbers, with its top-line in the $40 million to $50 million range. However, he said, a couple of projects that could come to fruition in the second or third quarter have the potential to drive more revenue.

SNDL has completed the previously disclosed acquisition of all of the issued and outstanding common shares of The Valens Company Inc., other than those held by SNDL and its subsidiaries, for total consideration of approximately $138 million. In addition, SNDL assumed Valens’ $60 million non-revolving term loan facility. The combined company will operate as SNDL Inc., headquartered in Calgary, Alberta. “SNDL’s existing consumer packaged cannabis business will be transformed by Valens’ high-quality extraction, processing, and manufacturing capabilities,” said SNDL CEO Zach Geoge. The transaction also includes some leadership changes. Tyler Robson, Valens’ former CEO, will become president of cannabis while Andrew Stordeur, SNDL’s former president and COO has left the company. Frank Krasovec was appointed to the board of directors. He is the CEO of Norwood Investments and co-founder and Chairman of DPC Dash, which owns and operates approximately 600 Domino’s Pizza stores in China.