Cannabis Sativa, Inc. (CBDS) announced the acquisition of California-based PrestoDoctor, a provider of online medical cannabis recommendations in California and Nevada, in an 8-K filing with the SEC. The deal calls for CBDS to acquire 51% of PrestoCorp, which operates PrestoDoctor, for $4.56mm in stock (1.027mm shares at a valuation of $4.4686 per share). CBDS will issue just 55% of the shares initially, with the remaining shares held in escrow and tied to certain milestones, including sales, EBITDA, filing of a patent and continued employment of the founders.

In addition to the issuance of shares, CBDS has agreed to provide a $500K line of credit at 5% to Presto and an additional $500K within a year and up to $1mm within two years of closing. Failure to provide these additional funds would lead to a one-year extension of the 2019/2020 earn-out targets. A Lock-up/Leak-out agreement restricts the sellers from disposing of CBDS shares until after six months, at which point they are limited to 10% of initial shares in the first year and then 3% per month until three years has passed.

Presto co-founders include CEO Kyle Powers, a 2011 graduate of University of Nebraska who began his career as a software engineer at PayPal, and COO Rob Tankson, a 2009 graduate of University of San Francisco with a background in equity research who also co-founded a social fitness app company, Sospo. Powers and Tankson owned 78% and 20%  of PrestoCorp, respectively, with the remaining 2% owned by Jeremy Fancher.

While it is exciting to see young entrepreneurs so quickly capitalize on their success, we continue to harbor concerns about merger partner Cannabis Sativa, which has accomplished very little over the past 3 1/2 years as a public company. A review of its financials from Q1 shows sales of only $1065, with an operating loss of $2.01mm and a use of cash to fund operations of $141,750. As we have discussed previously, the insiders have been aggressively selling stock on the open market, and this trend continues to persist.

Overvalued penny stock companies with no substantive operations like Cannabis Sativa are smart to use their bloated stock to do deals like the Presto acquisition, which looks more promising than the purchase of 50.1% of “iBudTender” for $50K and 150K shares valued at $300K  a year ago that has not yet produced material revenue. With 19.379mm shares as of May 18, the market cap of CBDS is approximately $80mm, or 25X its stockholders’ equity of $3.23mm. Another sign that its stock is overvalued is the failure of the company to raise the full amount it intended after issuing a Private Placement Memorandum in October, with a goal of selling 625K shares at $2.40 with warrants at $4.00. The company sold only 230,775 shares despite the fact that its stock was above $4.00 during the entire time-frame, trading above $9.00 in early January. 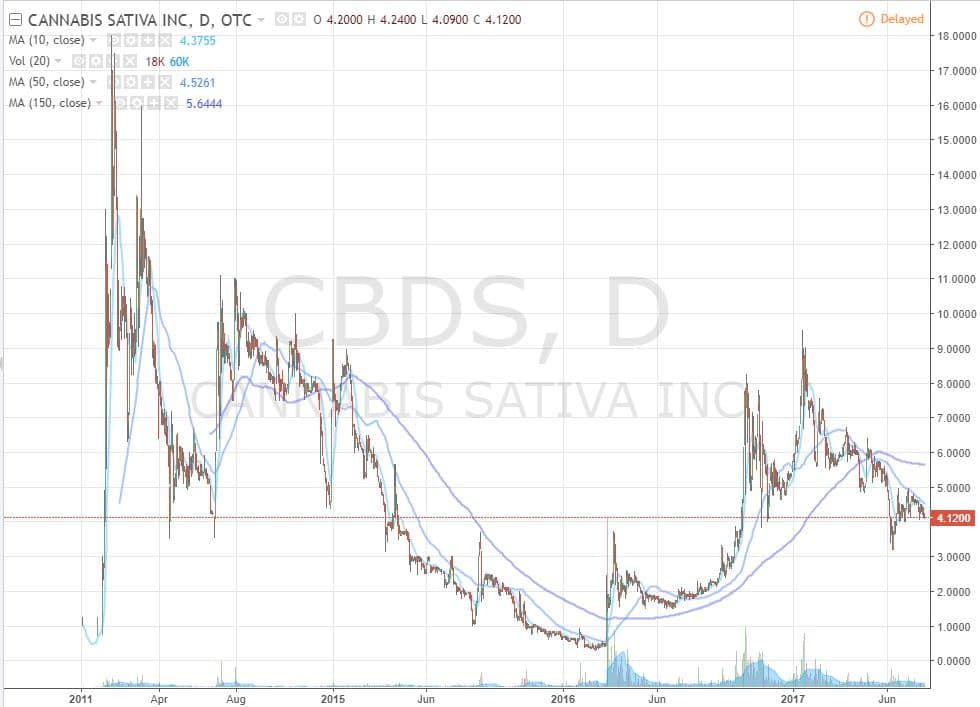