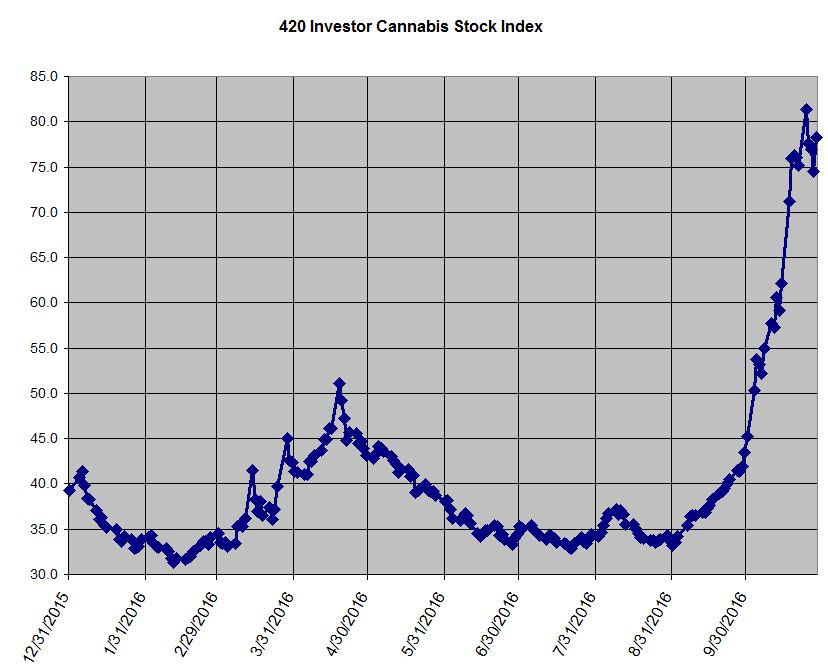 While this has been great for traders who jumped into the market in advance of the rally, which has been fueled by speculative interest related to the five legalization ballot initiatives, it has been a windfall for the insiders at several companies who have seen their stocks rally even more dramatically than the overall market: American Cannabis (OTC: AMMJ), Cannabis Sativa (OTC: CBDS), Cannabis Science (OTC: CBIS), General Cannabis (OTC: CANN) and United Cannabis (OTC: CNAB). Insiders have taken advantage of the rally at each of these companies and sold stock.

AMMJ has increased by 1011%, far outpacing the overall market move.  CEO Corey Hollister sold 20K shares at $0.90 on October 25th according to the Form 4 filing. His remaining holdings exceed 1.2mm shares, so the sale wasn’t particularly noteworthy for its size, but it represents his first sale of the stock since the company began trading publicly in 2014.

Insider selling at CBDS is nothing new, but it has intensified in the past two months as the stock has increased by 165%.  The filings indicating the sales are available at OTCMarkets.com and include multiple sellers:

Insider selling is not a new phenomenon at CBIS either, but the correlation to bullish sounding press releases followed by large sales is concerning. On October 19th, the company issued news that “they are in the process of negotiating for another couple of major new drug development property deals, this time for two properties, a 200-acre California property and a 100-acre property in Nevada.” Sounds great, right?  Well, COO Robert Kane didn’t hesitate to unload 3mm shares, clearing $194,100.  Since 9/1, as the stock has increased 252%, Kane has sold a total of 11.17mm shares, clearing more than $407K.

CNAB, which as increased 891% since 8/31, has seen persistent selling from three insiders: Earnest Blackmon, Chad Ruby and Tony Verzura.:

The company explained in a press release in late September that “a portion of the proceeds from these sales will be used to help fund the Company’s day-to-day operations.” CNAB had just $9,221 in the bank as of 6/30 and posted a net loss in excess of $666K in the first half of the year.