The Public Cannabis Company Revenue & Income Tracker, managed by New Cannabis Ventures, ranks the top revenue producing cannabis stocks that generate industry sales of more than US$12.5 million per quarter (C$16.1 million). This data-driven, fact-based tracker will continually update based on new financial filings so that readers can stay up to date. Companies must file with the SEC or SEDAR and be current to be considered for inclusion. Please note that we have raised the minimum quarterly revenue several times as the industry has scaled up, including from US$10.0 million in November 2020, US$7.5 million in June 2020, US$5.0 million in October 2019 and US$2.5 million in May 2019.

38 companies currently qualify for inclusion, with 27 filing in U.S. dollars and 11 in the Canadian currency, which is unchanged from our update a month ago. We continue to expect additional companies to qualify in the future.

In December, only MedMen (CSE: MMEN) (OTC: MMNFF) provided a financial update among those companies reporting in American dollars.  In contrast to peers, it experienced a substantial decline over the past year in revenue during its fiscal Q1. Its revenue bounced back from a very weak Q4 as it also improved its adjusted operating loss. 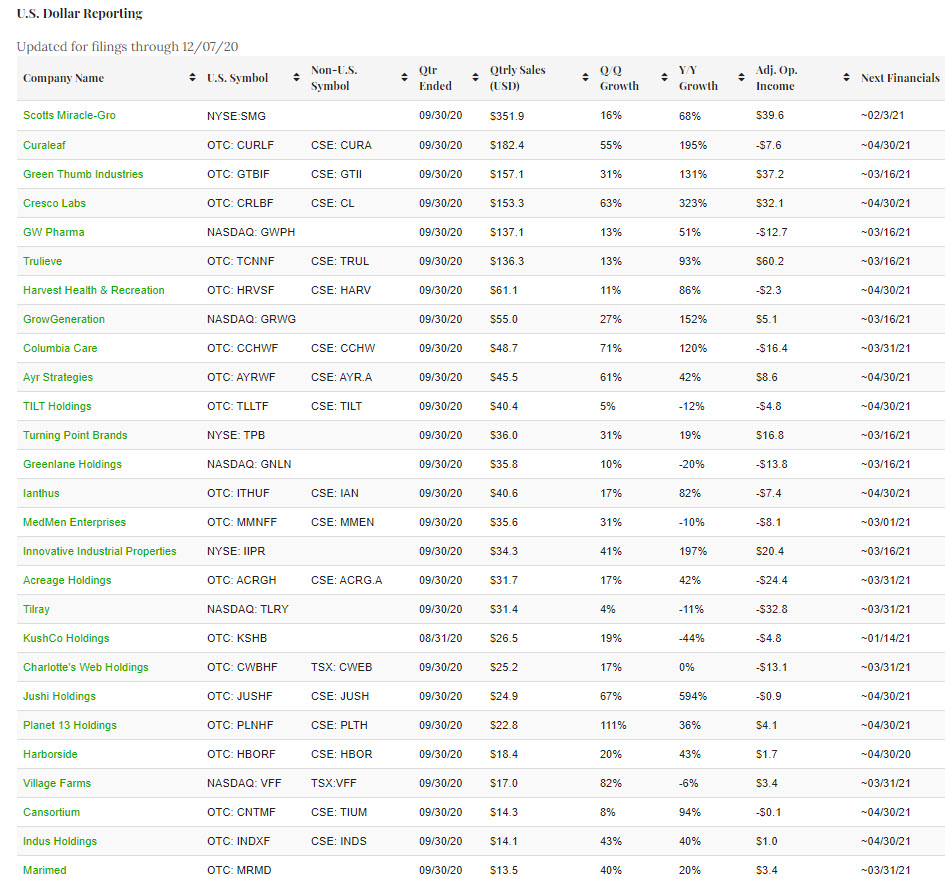 In January, only KushCo Holdings (OTC: KSHB) will be reporting financials. According to Sentieo, analysts expect the fiscal Q1 revenue will increase 8% sequentially to $26.8 million. Analysts expect the company to report positive adjusted EBITDA for the second consecutive quarter as well. The company has provided full-year guidance for revenue to be $120-150 million, with adjusted EBITDA expected to be $5-7 million.

Since our last update, Fire & Flower (TSX: FAF) (OTC: FFLWF) and Organigram (TSX: OGI) (NASDAQ: OGI) reported quarterly financials.  Fire and Flower reported revenue of C$31.1 million in its fiscal Q3, ahead of analyst estimates and up 16% sequentially. The company narrowed its adjusted operating loss as it reported positive adjusted EBITDA for the first time. Organigram fiscal Q4 revenue advanced 13%, also ahead of analyst estimates, though its adjusted operating loss was negatively impacted by one-time charges.

Aphria’s fiscal Q2 ending in November is expected to have seen revenue grow 5% sequentially, according to Sentieo, to $153 million, which includes substantial non-cannabis revenue. Liberty Health, which has announced its pending sale to Ayr Strategies (CSE: AYR.A) (OTC: AYRWF) is very likely to fall off the list, as its sales will almost certainly decline substantially from its fiscal Q2 and could possibly decline from a year ago, based on data published by Florida. Organigram fiscal Q1 revenue is expected to increase by about 5% sequentially to C$21.4 million. Valens fiscal Q4 revenue for its year ending in October is expected to advance 20% sequentially to C$21.7 million.

For those interested in more information about companies reporting, we publish comprehensive earnings previews for subscribers at 420 Investor, including for Focus List members Aphria, KushCo Holdings and Organigram.