Fifteen companies currently qualify for inclusion, with six filing in U.S dollars and nine in the Canadian currency. Yesterday, Aphria (TSX: APH) (OTC: APHQF) reported its Fiscal 2018 Q3 results and maintained its fourth position for Canadian listed companies or companies that report in Canadian dollars. Revenue of C$10.27 million, which included one month of sales from recently acquired Broken Coast of approximately C$1.1 million, grew 101% from year-ago levels. The company reported positive EBITDA and generated C$155K in cash from operations. The analyst consensus for its Q4 is approximately C$15.3 million in revenue, which could move it into third place. 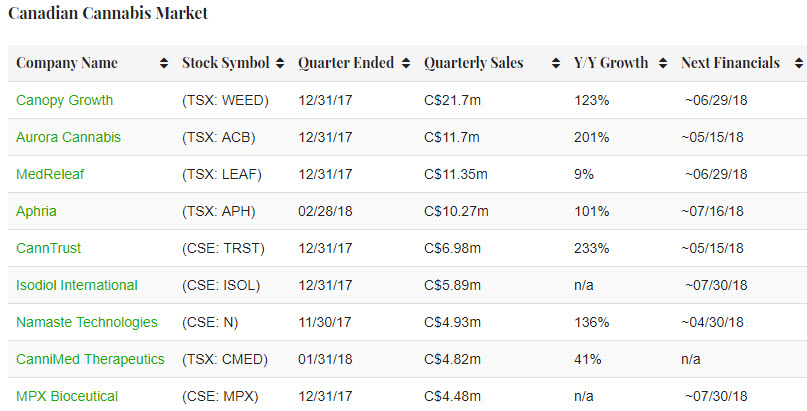 Last week, Kush Bottles (OTC: KSHB) moved to the top spot for companies listed in the U.S. or reporting in U.S. dollars. Sales of $10.36 million in the fiscal second quarter ending February 28th grew 249% from a year ago and included a full quarter of revenue from the CMP Wellness acquisition that took place at the end of April a year ago. For Q3, Cowen and Company analyst Vivien Azer, the sole analyst providing financial projections on the company, expects KSHB to report sales of $12.0 million in Q3 and $49.4 million for FY2018, which ends on August 31st. She projects FY19 sales of $84.9 million.

Over the balance of April, several companies will provide updates.  Golden Leaf Holdings (CSE: GLH) (OTC: GLDFF) will be reporting its Q4 financials before the end of the month. Namaste Technologies(CSE: N) (OTC: NXTTF) will report its FY18-Q2 financials by the end of the month. Based on analyst estimates, Organigram (TSXV: OGI) (OTC: OGRMF), which reports its FY18-Q2 by the end of the month, is likely to join the list. In May, several companies will be providing quarterly updates, including Aurora Cannabis (TSX: ACB) (OTC: ACBFF) and CannTrust (TSX: TRST) (OTC: CNTTF) in Canada and CV Sciences (OTC: CVSI),  GrowGeneration (OTC: GRWG), GW Pharma (NASDAQ: GWPH) and Terra Tech (OTC: TRTC) in the United States.