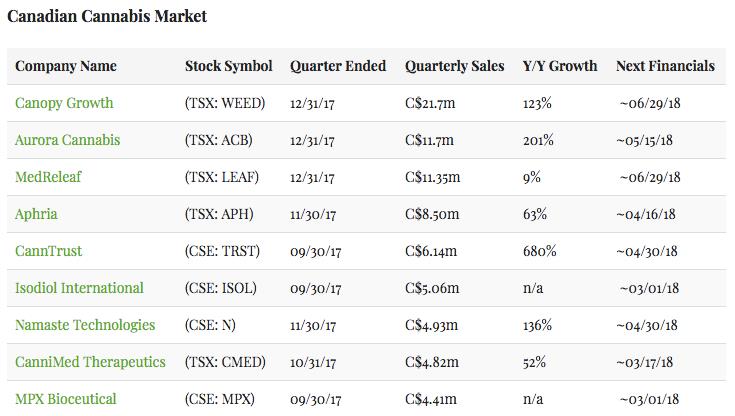 In addition, GW Pharma (NASDAQ: GWPH) reported $7.74 million sales for its FY18-Q1 ending December 31st earlier this month, which represented growth 169% but was inflated by one-time factors related to the termination of a research and collaboration agreement with Otsuka Pharma, which gave back the rights to Sativex.

In March, Isodiol International (CSE: ISOL) (OTC: ISOLF) and MPX Bioceutical (CSE: MPX) (OTC: MPXEF) are expected to report its FY18-Q3 results for the quarter ending December 31st by March 1st. Terra Tech (OTC: TRTC) is expected to report its annual financials for 2017 by March 16th. CanniMed Therapeutics (TSX: CMED) (OTC: CMMDF) would ordinarily report its FY18-Q1 results for the quarter ending January 31st by March 17th, though it may not do so if its acquisition by Aurora Cannabis has closed. CV Sciences (OTC: CVSI) and Grow Generation (OTC: GRWG) are expected to report 2017 financials by April 2nd. Finally, while CannTrust (CSE: TRST) (OTC: CNTTF) isn’t required to report its 2017 financials until late April, we expect it to do so by the end of March. The company has already reported preliminary Q4 sales of $7 million.