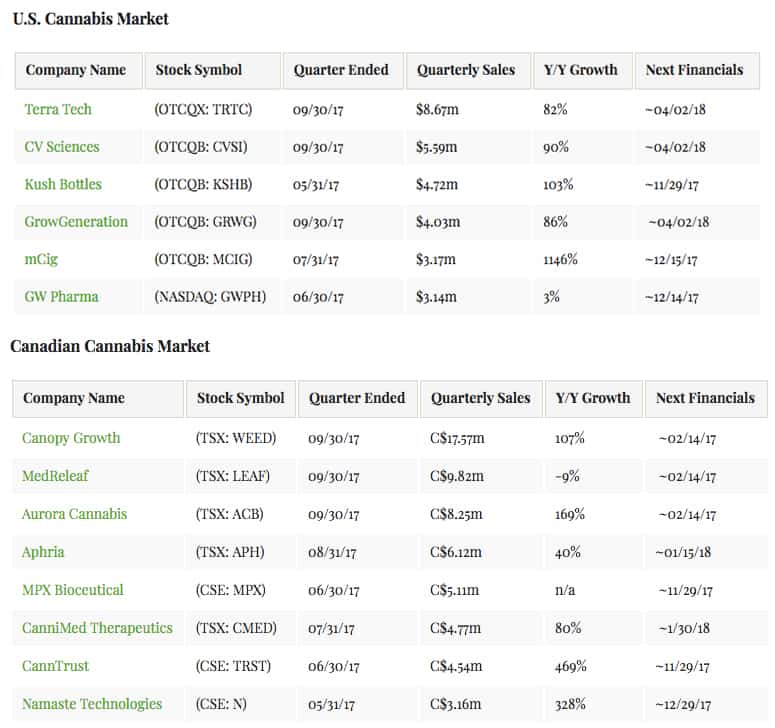 The Public Cannabis Company Revenue Tracker, managed by New Cannabis Ventures, ranks the top revenue producing cannabis stocks that generate industry sales of more than $2.5m per quarter. This data-driven, fact-based tracker will continually update based on new filings so that readers can stay up to date. Companies must file with the SEC or SEDAR to be considered for inclusion.

Fourteen companies currently qualify for inclusion, with six based in the United States and eight in Canada. There have been several updates so far this month. We have updated the Canadian list to reflect the FY18-Q1 report for Aurora Cannabis (TSX: ACB) (OTC: ACBFF) and the FY18-Q2 reports for Canopy Growth (TSX: WEED) (OTC: TWMJF) and MedReleaf (TSX: LEAF) (OTC: MEDFF). Aurora Cannabis reported the highest growth, with sales of C$8.25mm increasing 169% from a year ago. Canopy Growth sales grew 107% to C$17.57mm. MedReleaf revenue fell 9% to C$9.82mm.