In contrast to a period when promotion and fluff have grabbed the attention of novice stock investors interested in the legal cannabis theme since early 2013, we are now seeing companies with revenue and profits quickly overshadowing many of the former pump and dumps of the publicly-traded sector. Investors are beginning to focus on those companies that are rapidly executing rather than those that just talk about it.

While the numbers out of Canada’s licensed producers have been quite impressive, our observation extends to the U.S. as well, where there are now six companies that file with the SEC and report quarterly revenue in excess of $2.5mm, a list that we expect will be growing in short-order. In addition to some companies that fall just short of the criteria that will join the list, we believe that we are on the cusp of an increase in new companies going public. One in particular that we think will quickly be added is High Times, which is in the middle of a reverse-merger into a NASDAQ-listed company in a deal now expected to close by December 12th.

In order to help our readers follow the companies generating the highest revenue, we have created the Public Cannabis Company Revenue Tracker, which we will be updating regularly. Here is a snapshot of both the U.S. and Canadian companies that meet the criteria: 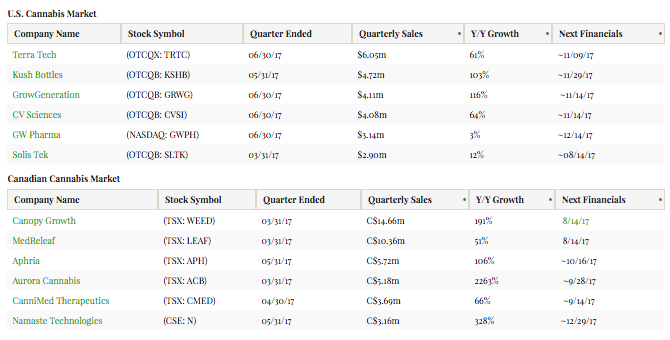 In addition to the name of the company and its trading symbol, we are reporting the most recent quarterly sales (and the date that quarter ended), the annual growth rate and the expected or announced date of the next quarterly financials release. The columns are sortable as well.

Looking at the U.S. companies, there is a diversity in the types of companies that qualify. Terra Tech (OTC: TRTC) is a vertically-integrated producer/retailer in California and Nevada. Kush Bottles (OTC: KSHB) offers packaging, supplies, and accessories out distribution facilities located in California, Colorado and Washington. GrowGeneration (OTC: GRWG) operates hydroponics stores in California, Colorado, Nevada and Washington. CV Sciences (OTC: CVSI) is a leading provider of CBD products derived from industrial hemp. GW Pharma (NASDAQ: GWPH) is a biotech company that currently markets Sativex in several markets outside of the U.S. Solis Tek (OTC: SLTK) provides lighting solutions as well as nutrients that are distributed through hydroponics stores and directly to commercial growers.

In the Canadian market, each of the 5 leading licensed producers, all of which trade on the Toronto Stock Exchange, has sales above C$3.69mm (US$2.84mm), including Canopy Growth (TSX: WEED) (OTC: TWMJF), MedReleaf (TSX: LEAF) (OTC: MEDFF), Aphria (TSX: APH) (OTC: APHQF), Aurora Cannabis (TSX: ACB) (OTC: ACBFF) and CanniMed Therapeutics (TSX: CMED) (OTC: CMMDF). Namaste Technologies (CSE: N) (OTC: NXTTF), which actually does most of its online vaporizer and accessories business in the UK and Australia, rounds out this group.

We think that revenue is an important metric to follow, though we note that high revenue alone isn’t necessarily a reason to invest in a company. Investors are well-served to take into account other factors, like the growth in the company, its ability to generate cash from its operations or access new capital, the capital structure and the valuation. We should also say that companies not yet generating revenue could prove to be good investments. With that said, those looking to participate in the growth of the cannabis industry should investigate companies that are actually generating substantial revenue rather than fluffy press releases.