Although just two years old, Pennsylvania’s medical cannabis market is booming. The program serves around 160,000 patients, and according to numerous statewide media accounts, there are persistent product shortages, especially for dry leaf cannabis. One of the reasons for the boom was the addition, last July, of anxiety disorders to the list of qualified medical conditions. Tourette syndrome also was added at that time. In this review, we take a look at the history of Pennsylvania’s medical cannabis program, the existing marketplace and the potential for future growth.

On April 17, 2016, Senate Bill 3, was enacted into law as Act 16 of 2016 when it was signed by Gov. Tom Wolf, making Pennsylvania the 24th state to legalize medical cannabis. The first sale was made in February 2018 and the program ended the first year with approximately 83,000 medical cannabis patients. That number doubled in the second year.

A 5% tax is imposed on the grower/processor from the sale of cannabis to a dispensary. There is no sales tax.

The initial bill allowed for 17 qualifying conditions. Today, there are 23 qualifying medical conditions ranging from anxiety disorders to Tourette syndrome.

Form factors include pills, extracts, liquids/tinctures, topicals, patches and dried flower, which wasn’t available until August 2018. As a result, many stores run out of the product as soon as they get it in, a victim of the program’s own success.

Pennsylvania issued licenses to cultivators/processors and to dispensaries in two phases. In Phase 1, the state issued 12 grower-processor licenses.

The public companies with these licenses include:

One of the 12 license holders, AGRiMED, was suspended in July 2019, after the Department of Health found violations during a surprise inspection. Harvest Health & Recreation (CSE: HARV) (OTC: HRVSF), which acquired AGRiMED’s grow facility there blamed the problems on prior management. 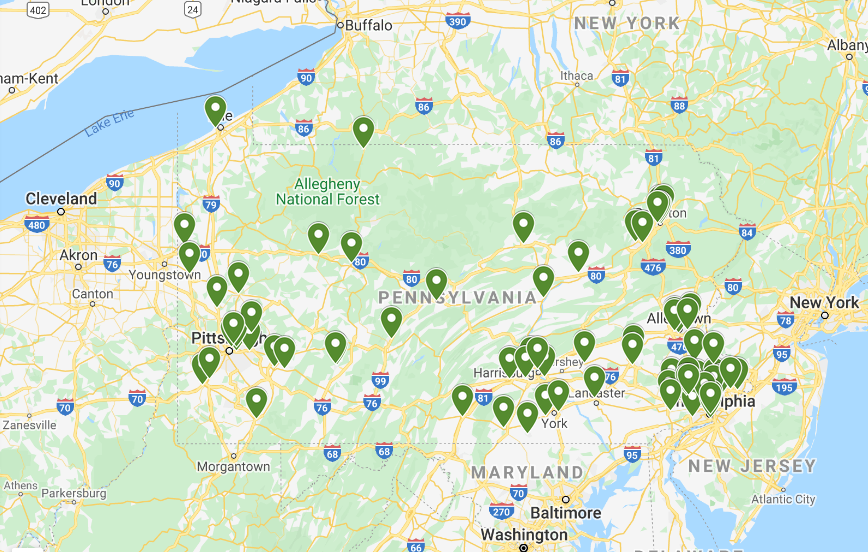 Public companies also have substantial exposure to the dispensaries in Pennsylvania. There were 27 licenses issued in Phase 1, and 23 issued in Phase 2. Each Phase 1 license allows the holder to open three dispensaries, while there are two permitted for the Phase 2 holders.

Phase 1 multistate operators with licenses include:

In Phase 2, Cresco picked up another license, while Green Thumb picked up four and Harvest got six. After a settlement with Pennsylvania, Harvest holds the right to operate 15 dispensaries. Other Phase 2 license holders include Jushi Holdings (CSE: JUSH) (OTC: JUSHF), which has 3 licenses, and Vireo Health.

In November, the director of Pennsylvania’s Office of Medical Marijuana said cannabis sales had generated more than $524 million in revenue. An estimated 1,400 physicians are certified to prescribe to an estimated 175,000 patients, according to a report published in December 2019 by Compassionate Care Centers. The survey found that the majority of patients were using medical cannabis to treat chronic pain (37%) followed by PTSD (24%). Anxiety, which as previously mentioned, was added as a qualifying medical condition last year, was not included in this survey.

Pennsylvania’s medical marijuana program has grown exponentially since it was launched two years ago and it has the potential to grow even more.

Last month, a new bill (HB 50) to legalize adult use cannabis was introduced into Pennsylvania’s legislature by Rep. Jake Wheatly, Jr. The legislation builds off of the framework established by Act 16 of 2016. If passed, the bill would “provide for social justice reforms, return both professional and driver’s licenses, incentivize cannabis businesses to partner with PA farmers, as well as invest in student debt forgiveness, after school programs and affordable housing,” according to Wheatly. He estimates it would generate upward of $580 million in new tax revenue.

According to a Cannabis Listening Tour Report issued last July by Lt. Gov. John Fetterman, an estimated 65-70 % of Pennsylvanians support adult use. Republicans, who control both the House and the Senate, do not.

Even if adult use cannabis is not legalized this time around, Pennsylvania’s cannabis market remains strong, which is good news for those companies currently doing business, and looking to do business there.