After a sharp decline in September that left the index down 7% in Q3, the Global Cannabis Stock Index extended strong October gains, soaring 50.8% in November to 44.77: 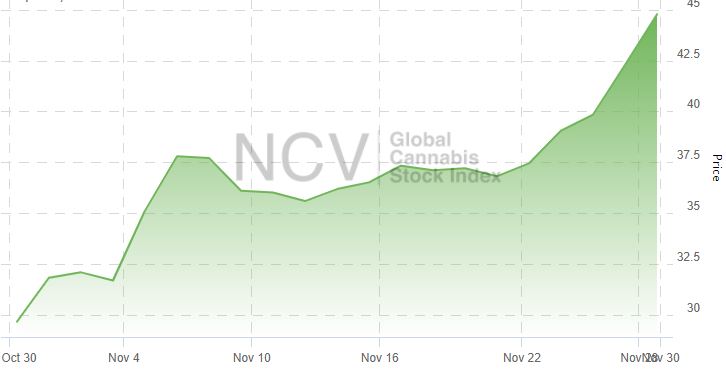 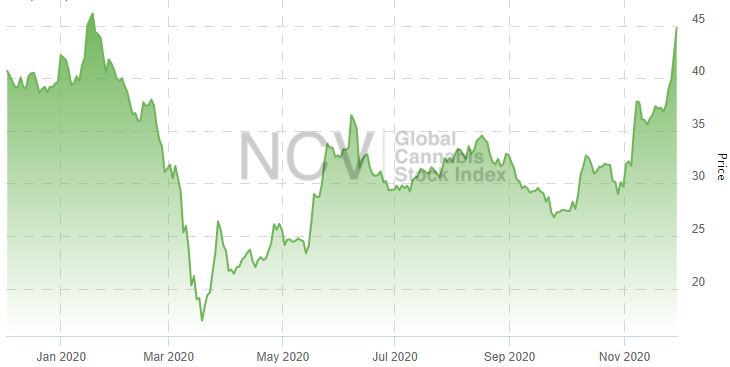 The strongest 4 names in November all gained at least 108%:

A common thread among the best performing stocks is that they all trade on a higher exchange in the U.S. Aurora Cannabis, which remains down 55% year-to-date, was the worst performer in October but rebounded sharply in November after the elections. The company raised capital at US$7.50 with US$9.00 warrants but traded through the offering price. Village Farms exploded higher and is now up 82% in 2020 after closing the acquisition of Emerald Health’s minority stake in the Pure Sunfarms joint venture and reporting a solid Q3. GrowGeneration, up 758% in 2020, continued to rally after boosting its outlook when it reported its Q3 and making a significant acquisition. India Globalization Capital, which just qualified to join the index, doesn’t appear to have a substantive business, but it is a trader favorite. The stock has rallied 263% year-to-date.

The 4 weakest names fell or rose by less than 17% in November:

MediPharm Labs and Neptune, both among the weakest names in the index in October, remained weak in November after both companies reported quarterly financials. In the case of MediPharm Labs, which is down 85% year-to-date, its revenue plunged by 89% from a year ago in Q3 as the company repositioned as a supplier of branded products in Canada and shifted its focus to markets outside of North America. Neptune Wellness has also been transitioning its business away from serving LPs with its extraction capabilities and has moved outside of the cannabis industry to a great degree while also pursuing its own branded cannabis product strategy. Its stock is down 36% this year. Liberty Health Services, down 20% in 2020, is struggling in its only market, Florida. It has lost market share there, as its unit sales, according to data from the state, have declined sharply in recent months. Power REIT,  unlike the other weak performers, is up substantially in 2020, rising 205% thus far. The diversified REIT has been expanding its presence in the industry.