After beginning the year with a 57.4% gain in Q1, the Global Cannabis Stock Index moved sharply lower again in November, its eighth consecutive monthly decline, as it lost 12.0% to 41.74: 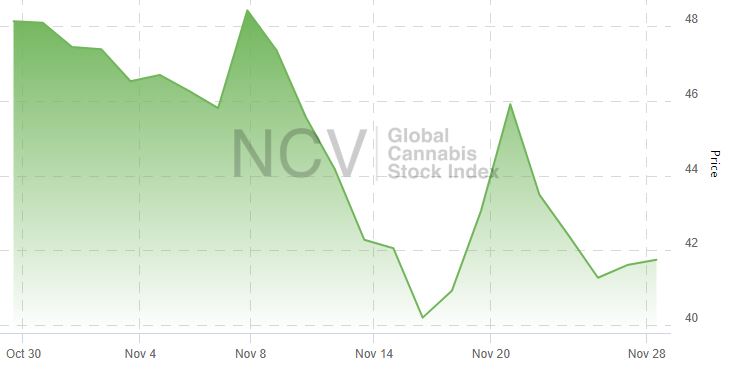 The index, which had 44 qualifying members during the month following the quarterly rebalancing at the end of September, declined 54.9% in 2018 and has now lost 34.8% as of the end of November: 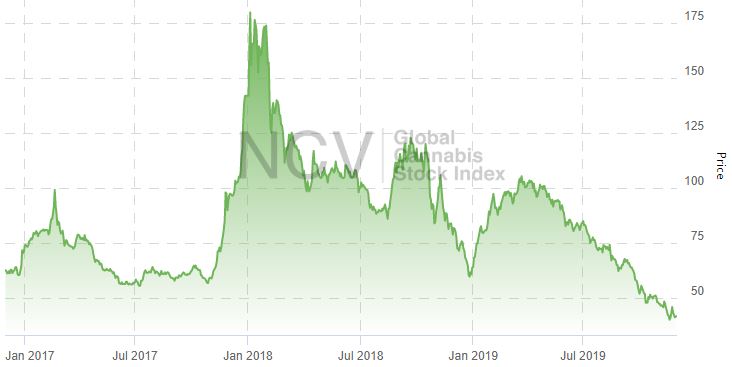 5 names gained more than 10% during November:

Strength among MSOs was a key trend during the month, with four of the top performers from this sub-sector, each reporting financial results during the month. Curaleaf Q3 revenue was slightly lower than expected but grew 27% from Q2. Trulieve, the second biggest gainer for the second consecutive month, generated Q3 revenue of $70.7 million, ahead of expectations and up 22% from Q2, maintaining its leadership among MSOs. Planet 13 reacted poorly to its Q3 report that showed revenue growth of just 1% from Q2, but it held a large portions of the gains from earlier in the month. GTI beat analyst forecasts, reporting Q3 revenue that was just behind the leader at $68 million and up 52% from Q2. Valens GroWorks didn’t release any substantive news during November, but its performance extended gains in October that followed its fiscal Q3 earnings release.

5 names fell by more than 30% during November:

MedMen sunk after announcing layoffs and a plan to achieve profitability, with the stock eroding further after its fiscal Q1 financials showed sequential revenue growth of just 5%. Emerald Health raised a small amount of capital during the month and became entangled in a legal dispute with its Pure SunFarms JV partner, Village Farms. 22nd Century Group was hit hard by news that the FDA would delay rules on low nicotine for cigarette manufacturers. CV Sciences experienced a 25% decline from the prior quarter and a 7% decline from its year ago revenue in the CBD market. Aurora Cannabis reported a 24% sequential decline in revenue and allowed early conversion of its convertible debentures, which weighed on its stock late in the month.