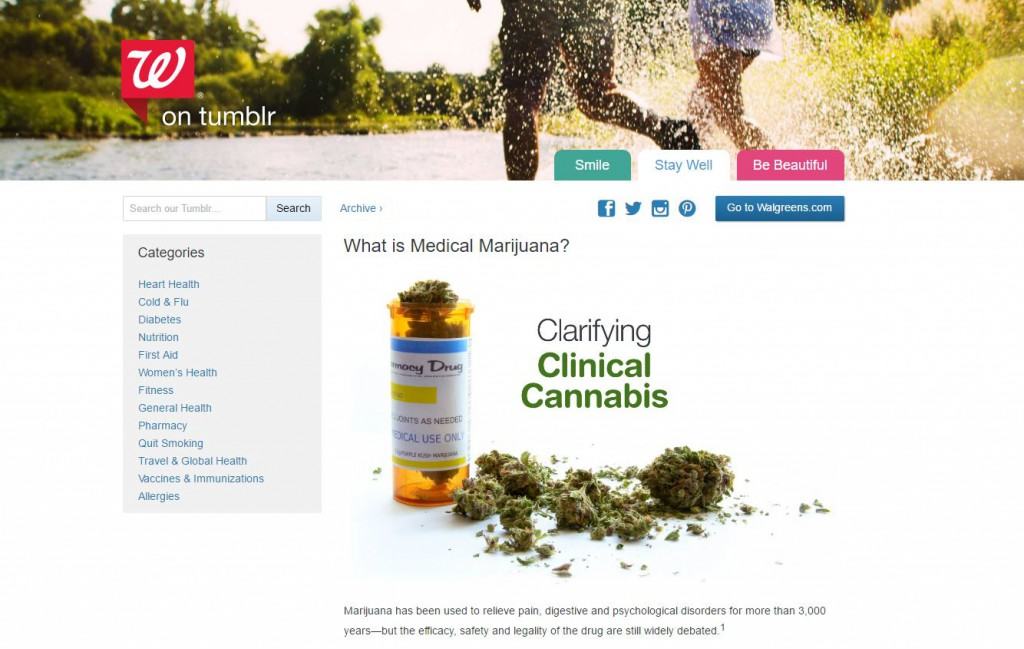 Chris Male of Anslinger Capital shared something today with our almost 4000 member LinkedIn group, Cannabis Investors & Entrepreneurs, that was just too good to be true.  I dismissed it incorrectly as fake news, but indeed it is true:  Walgreens (NASDAQ: WBA) sent out a blast email on April 26th discussing medical cannabis.  The piece, “What is Medical Marijuana? Clarifying Clinical Cannabis“, was written by Dahlia Sultan, PharmD, Resident Pharmacist, Walgreens and the University of Illinois at Chicago.

She shares basic information about medical cannabis that won’t be surprising to those who are familiar with the potential medical benefits, but it actually suggested that those wanting more information should “talk to your doctor”.

If you’d like more information about the use of medical marijuana, talk with your doctor.

I can’t recall any S&P 500 company ever sharing such a supportive view, especially one that is involved in the lives of so many people who count on it for advice on health and wellness.  Sultan also calls out many medical conditions for which medical cannabis may be appropriate, including cancer pain management, Parkinson’s, Tourette’s Syndrome, Alzheimer’s, Schizophrenia, Cardiovascular disorders, palliative care and Glaucoma.  Wow!

Interestingly, while most people consider smoking to be the most common method, as the article acknowledges, Sultan points to alternative delivery systems, including capsules, vaporization, liquid extracts and edibles. She points to potential side effects like dizziness and short-term memory loss, but she concludes with advice on how to get a prescription. Again, I have to say wow! Pharmacies in Canada have expressed a desire to get involved in the country’s medical cannabis program.  Is Walgreens smelling a huge opportunity?