Amazon announced its support for cannabis legalization, endorsing the MORE Act,​ and changed some internal policies regarding cannabis usage by employees. Illinois adult-use sales increased 163% from a year ago to $116.4 million. BDSA data for April showed record sales in several markets, with California standing out for its 42% growth from a year ago.

Health Canada added 4 licenses, leaving the total at 681, including 2 that are expired, revoked or suspended.

I also was interviewed by Cannabis Investing Network

The Global Cannabis Stock Index snapped a two-week winning streak with a small loss, falling 0.8% to 59.11: 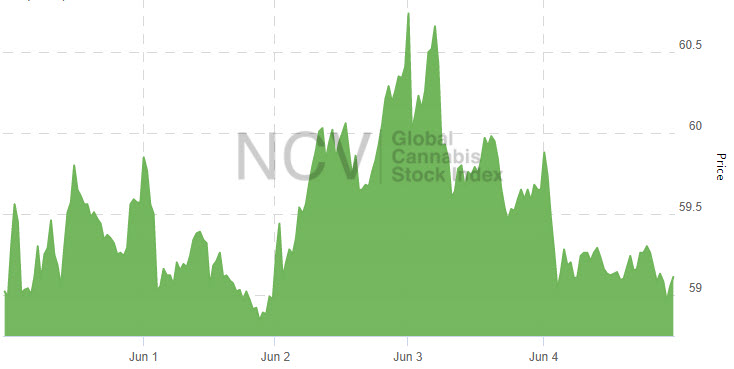 The big themes ahead are likely to be continued cross-industry investment into the sector and more consolidation in Canada and in the U.S., potential federal regulatory reform (SAFE Banking Act and other more comprehensive legislation, which could eliminate 280E taxation and enable trading on higher exchanges for MSOs as well as the broad usage of credit cards for cannabis purchases), steps to enable cannabis research, the roll out of MMJ in Germany, Mexico and in Australia as well as continued advances in South America and potential adult-use legalization in Israel and Mexico, new legal cannabis implementations in AZ, MT, NJ and SD​, and MMJ implementations in AL, WV and VA, possible legalization via the legislatures in CT, DE, FL, MD, MN, NH, PA and RI and implementation of the NM, NY and VT commercial programs in 2022 and VA in 2024.