As we reported earlier this week, the big story for the cannabis capital markets has been a flood of new issues out of Canada. The largest deal, announced on Tuesday morning, is the Aphria (TSX: APH) (OTC: APHQF) offering of over 11mm shares at C$7.25 (C$80mm, with the potential to expand to C$92mm), which represented a 8.5% discount to the close on Monday.

One question investors may have had is why the big capital raise. The company didn’t really address this in the press release, where it offered a generic explanation:

The Company intends to use the net proceeds from the Offering for the development of infrastructure (including the purchase of capital and other equipment), the expansion of its geographic footprint in Canada and other strategic investments, and for general working capital purposes.

Today, though, Aphria filed a preliminary short form prospectus that provided substantial detail regarding the use of proceeds. After a 5% underwriting fee, the $76mm, which represents 26% of the balance sheet equity as of 8/31, will be used for:

The bottom-line is that Aphria wanted to add to its war chest to cover many possible uses of cash in the future.  The deal was priced at a premium to its last financing at $6.50 in May (C$86mm). Aphria stock, which was also pressured by the TSX policy statement released Monday, traded down significantly following the deal announcement, bottoming out at C$6.31 on Thursday before bouncing Friday: 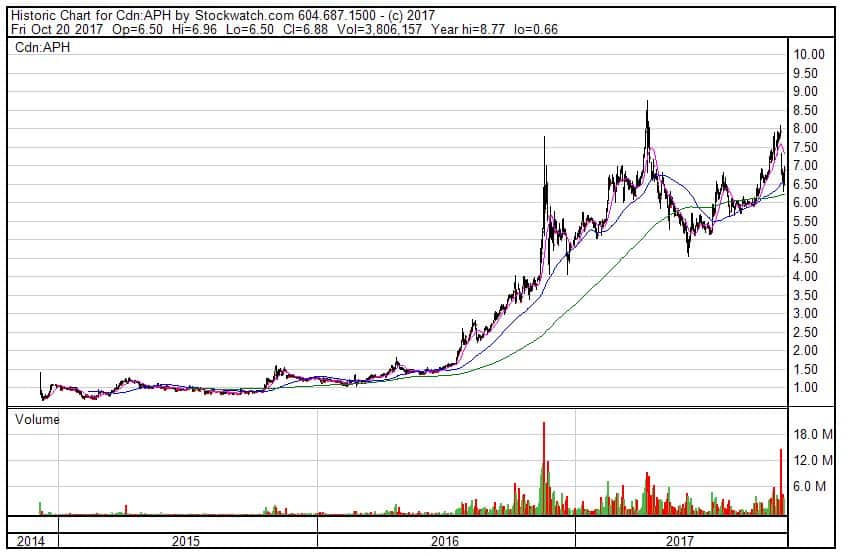