Canadian cannabis producers saw huge losses in trading on Tuesday. While some may attribute it to the TSX policy update after the close on Monday, with the exchange threatening to delist companies with U.S. operations (i.e. Aphria), the likely culprit was a flood of share issuance from the licensed producers.

Last week, Aurora Cannabis (TSX: ACB) (OTC: ACBFF) announced a $50mm bought deal that was increased to $60mm. It followed that offering with a $6mm private placement at the same $3.00 price but with $4.00 warrants as well, in a deal announced Monday morning.

After the close on Monday, Emblem (TSXV: EMC) (OTC: EMMBF) announced two deals, including a $15mm convertible note deal and a $10mm unit sale that was increased early Tuesday to $12mm.

Aphria (TSX: APH) (OTC: APHQF announced a deal on Tuesday morning, selling over 11mm shares at $7.25 for gross proceeds in excess of $80mm in a deal set to close on or about November 7th. Supreme Pharma (TSXV: FIRE) (OTC: SPRWF) also priced a bought deal, selling $30mm convertible notes (8% interest, convertible at $1.60) with warrants at $1.80.

The action on Tuesday was entirely to the downside, with all 23 LPs closing in the red: 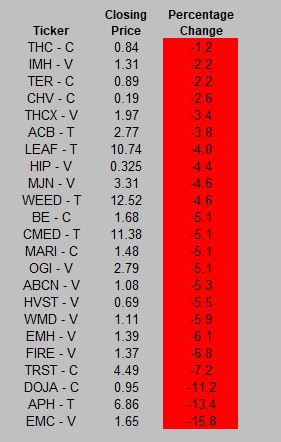 Despite the profit taking, the LP sector remains up strongly over the past few months, as the stocks have responded favorably to the news from the provinces thus far regarding distribution when Canada legalizes in 2018.