While the market for cannabis stocks has become more rational over the years, it is far from efficient. Most recently, we have seen a pick up in interest for large Canadian LPs ahead of the U.S. elections, which, on the surface, doesn’t make a lot of sense. Yet, so far in October, the New Cannabis Ventures Canadian Cannabis LP Tier 1 Index has rallied 12.7% despite no substantive news. In fact, Tilray and Canopy Growth have outperformed the largest four MSOs thus far.

While American cannabis operators are clearly more leveraged to the elections, we aren’t surprised that there has been a spillover into the LPs. One reason is truly comical, but it is simply that the financial media doesn’t understand the industry. When CNBC was interviewing Cowen Analyst Vivien Azer earlier this month about the potential impact of the upcoming elections, where she mentioned that she likes Cresco Labs and Green Thumb Industries, the graphics were mainly about other stocks not even mentioned, including Aurora Cannabis, Canopy Growth and Tilray. 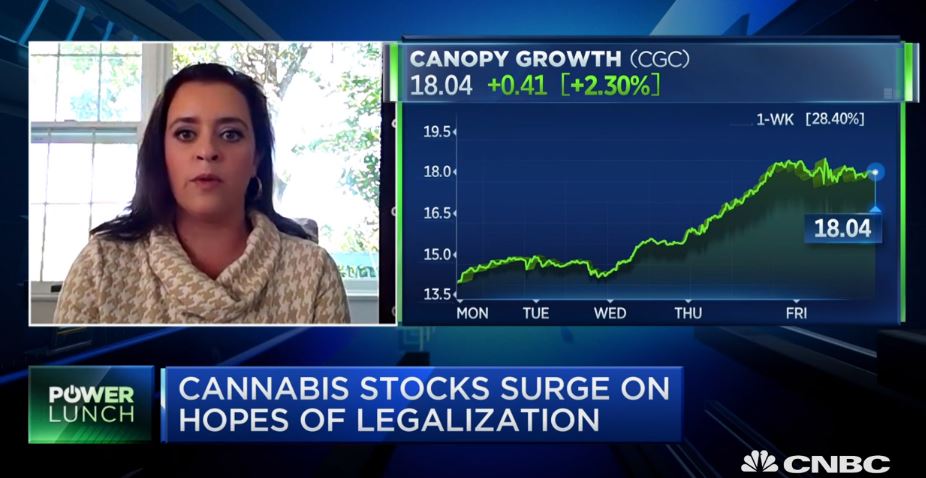 It’s not just CNBC that mishandles cannabis news. We subscribe to a popular trading news service and note that they include the largest Canadian LP tickers any time there is news on the American cannabis industry.

In addition to the media issue, we note that mutual funds can also misdirect investors looking to capitalize on the U.S. industry. The ETFMG Alternative Harvest ETF, which has assets of nearly $600 million, trades on the NYSE ARCA with the catchy ticker MJ, and it has absolutely no exposure to any American cannabis operator. Its top 3 holdings include Canopy Growth, Tilray and Cronos Group.

We know that many novice investors have gravitated to Robinhood, yet that platform doesn’t have a single American cannabis operator on it due to their not being listed on a higher exchange.

While we think that this isn’t likely to change in the very near-term and point out that this change would also open the door to American companies to uplist (or be acquired by non-cannabis companies), it’s a potential positive, especially for Canopy Growth and Cronos Group given their strategic partnerships, their existing relationships and their capital.

The best way to invest in the improving prospects is likely to invest in MSOs and ancillary companies, but don’t be surprised if a continuing rally pulls along the largest Canadian LPs.

Alan Brochstein’s 420 Investor is the only due diligence platform trusted by cannabis investors for over 6 years. The go-to premium service for investors to learn, explore, and profit from publicly-traded cannabis stocks. The primary goal of 420 Investor is to provide professional, real-time, objective information about the top cannabis companies in the market in order to help investors Capitalize on Cannabis™.