In the week that followed the announcement, the cannabis sector came under intense selling pressure. The New Cannabis Ventures American Cannabis Operator Index, of which MedMen is a member, declined 12.5% from the close on November 8th through November 15th. MedMen, which had closed at C$7.32 the night before the bought deal was announced, had declined to C$5.72 during that same time, or almost 22%: 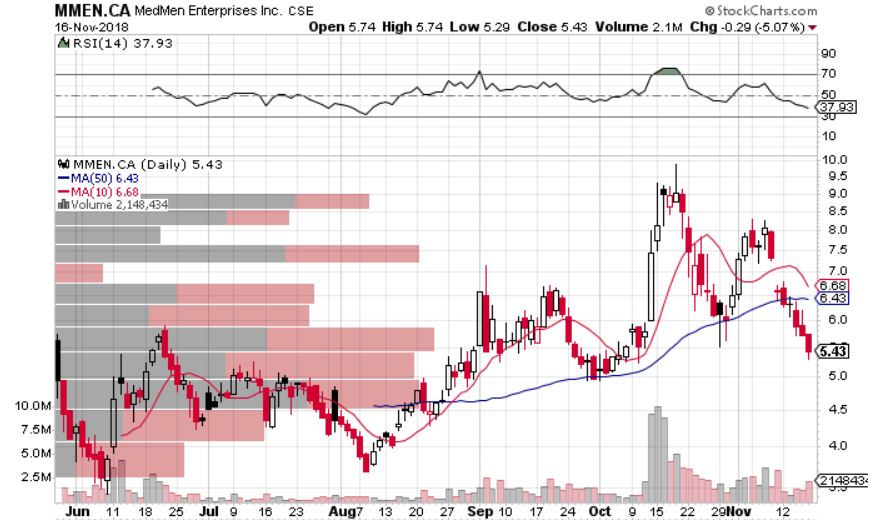 On Friday morning, the company issued a press release stating that the company’s CFO had resigned, with MedMen appointing its V.P. of Accounting, Jim Miller, as interim CFO. The stock fell a bit further before it was halted pending a news release by the company. Very late in the evening on Friday, the company revealed that it had materially changed the terms of the bought deal:

We reached out to CEO Adam Bierman to learn why the company had chosen to revise its financing, especially since it was a bought deal, with the underwriters assuming price risk. First, Bierman said that the departure of the CFO was in no way related to the subsequent change in the financing. According to Bierman, MedMen initiated the conversation with Canaccord, the lead underwriter, due to the market sell-off:

Shortly after the announcement, the global market experienced a significant sell off and as we ended last week the investors that bought that deal would have been underwater. That did not sit right with us and, accordingly, we initiated a discussion with Canaccord about repricing the deal to ensure our investors would be buying the deal based on an offering ripe for the returns we constantly seek to create.

While some shareholders may be disappointed with the company’s decision to reduce the price and other changes to the financing, Bierman believes that the move is in the long-term interests of the company, which had been building relationships with new shareholders that were intending to participate in the financing. The revised deal is expected to close in early December.