Ahead of Q3 earnings reports that kick off for the leading American cannabis companies on November 8th when Curaleaf reports, the stocks have fallen sharply over the past few weeks after a bounce from mid-September into late September. One stock in particular that has performed very poorly since the recent peak for the sub-sector on September 27th has been Green Thumb Industries, which has declined over 28%, the worst among the “Big 5”: 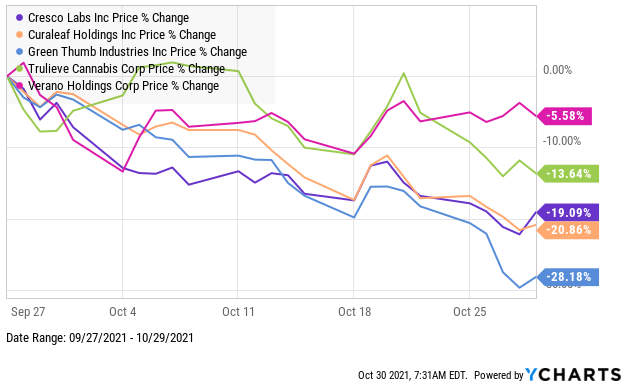 During October, GTI dropped 26.3%, while its closest peers averaged a decline of 10.7%. In the last week of the month, its OTC trading volume reached 2.9 million shares, the highest since late March and almost double its volume from the prior week. Despite the big spike in volume, we note that volumes have been substantially lower over the past seven months than in the period from March 2020 to March 2021: 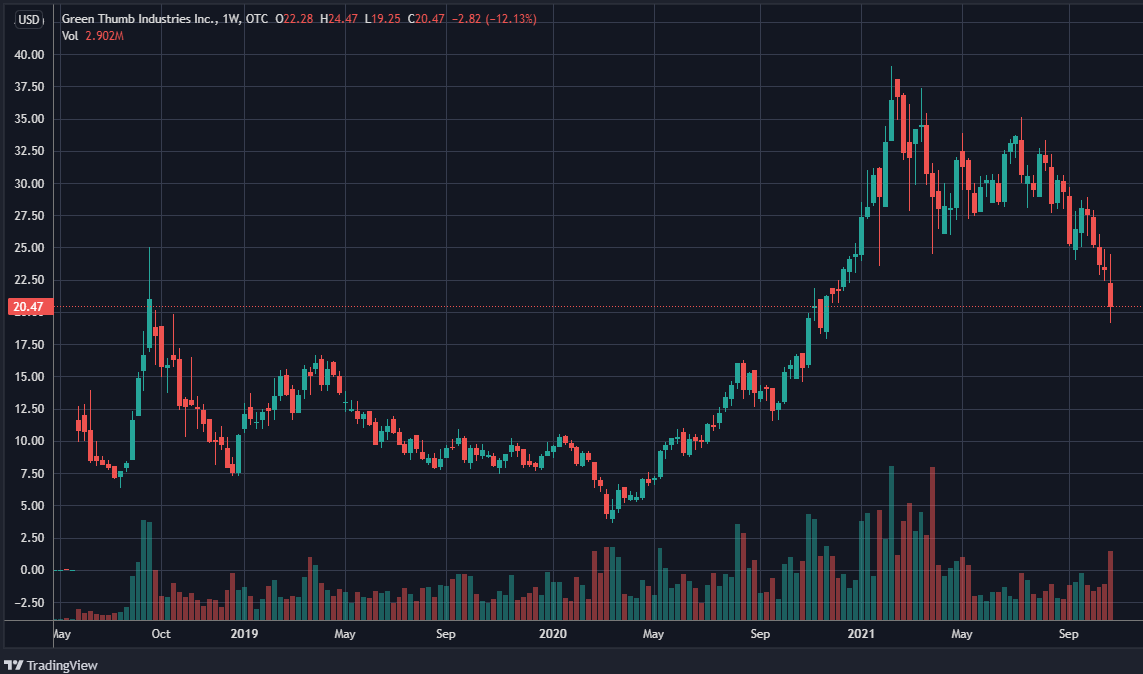 The recent breakdown in the stock essentially corrected its outperformance relative to peers since early August, when the company reported its Q2. Excluding Verano Holdings, which didn’t begin trading until February, it is still down the least since year-end in what has been very little differentiation among the four stocks: 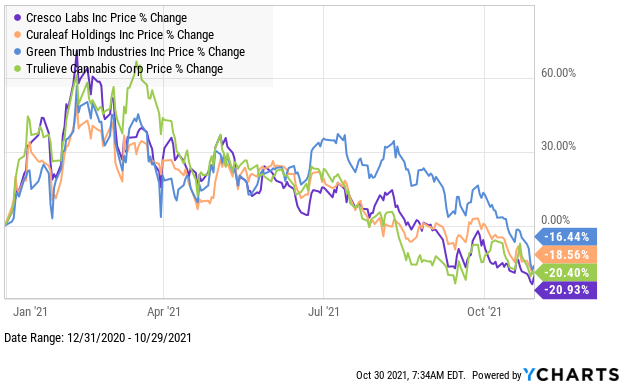 We think the breakdown in GTI reflects a lack of confidence in its premium valuation. Looking at the 9 leading MSOs by revenue, a group that includes Ascend Wellness, Ayr Wellness, Columbia Care, Cresco Labs, Curaleaf, GTI, TerrAscend, Trulieve and Verano Holdings, GTI still trades at the top of the group on two metrics, enterprise value to sales and enterprise value to adjusted EBITDA. Looking at 2022 analyst estimates, GTI ended October at 4.7X projected sales and 12.5X projected adjusted EBITDA compared to peers at an average of 3X and 8.2X, respectively. Despite its poor performance in October, then, GTI still commands a 50% valuation premium to its peers.

As investors begin to look at 2022, though, they may be questioning the amount of this premium, as the projected growth for revenue ranks 9th in the peer group at a still very healthy 33% (mainly organic). Its projected adjusted EBITDA growth of 39% also ranks 9th. The average of the 8 peers is 68% revenue growth and 105% adjusted EBITDA growth. It’s important to note that much of the growth at its peers has been due to M&A, so GTI’s growth on a per-share basis is better relatively speaking. GTI has announced three acquisitions in 2021, including in Massachusetts, Rhode Island and Virginia. Perhaps this correction in prices will allow it to be more aggressive on the M&A front in the months ahead.

We also think it’s important for investors to remember that the American cannabis industry isn’t likely to evolve into a winner-take-all competition as long as there is no interstate commerce. The reason for this is that many states cap production or the number of stores that a company can operate. Consequently, we continue to expect that many companies will succeed. Paying a big premium for one of the larger companies could prove unwarranted.

In our view, GTI has certainly earned its reputation as a leading MSO. It has exhibited strong growth in revenue, adjusted EBITDA, operating cash flow and even true EPS. Perhaps where it has stood out the most among peers has been its ability to raise both debt and equity capital from institutional investors. The company has also met or exceeded analyst expectations for revenue every single quarter over the past 10: 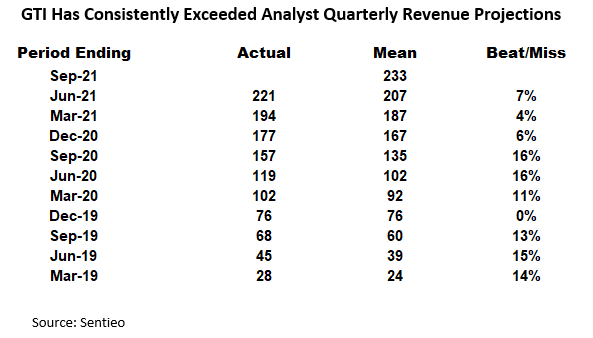 We think the weakness at GTI and its peers is related to concerns about potentially weak revenue growth in Q3 as well as the likelihood of reduced expectations for 2022. We have pointed to a slowing of cannabis sales over the past few months, and this could certainly impact Q3 results. Revenue generation for MSOs can be lumpy and depends upon more than just same-store sales. Other factors include the timing of new production capacity, store-openings and M&A. As it relates to next year, the slowing overall industry sales could impact the outlook, but a bigger factor, in our view, is the delay in New Jersey, which had been expected to launch its adult-use program in 2021 but still hasn’t done so. Illinois, as well, continues to see delays in the opening of new dispensaries. Leading MSOs are active in both of these states. We aren’t expecting material reductions, but we certainly appreciate why investors may be cautious.

Investors can debate how much premium should be attached to the valuation of GTI over its peers. We believe the entire group is priced very attractively, including GTI. 2021 has been a mirror of 2020, when the year began with a 66.5% decline in the New Cannabis Ventures American Cannabis Operators Index followed by a rally of 335% that left the index up 45.7% for the full year. 2021 began with a meteoric rise of 84.3% followed by a decline of 58.6%, leaving the index down 23.7% so far this year. The net change has been an advance of 11.3% since the end of 2019. GTI has rallied by 110% during this period of time. We think that the massive expansion in revenue and profitability, the additional states that have legalized and that are in the process of implementation and the vastly improved access to capital more than justify the modest share price appreciation in American cannabis stocks over the past 22 months.

This week’s newsletter is sponsored by Cannabiz Media. 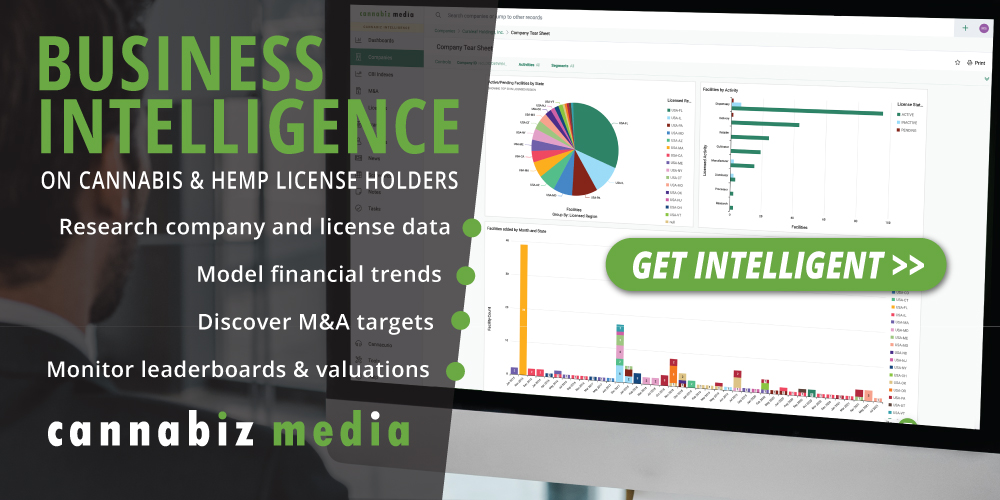 A single tool with reliable and verified information to aid with effortless analysis and reporting to prepare board & pitch presentations, build financial models, discover M&A targets, and monitor industry leaders.