Due to the rapid growth in the cannabis industry, we raised the minimum to US$25 million (C$31 million) to qualify for what we are now calling the senior list and introducing a junior list with a minimum of US$12.5 million (C$15.5 million) in September. At the time of our last update in early October, 35 companies qualified for inclusion, including 31 filing in U.S. dollars and 4 in the Canadian currency, and the number of Canadian companies increased to 5 as HEXO Corp (TSX: HEXO) (NASDAQ: HEXO) joined the list, bringing the total to 36. The junior list now includes 12 reporting in U.S. dollars and 6 in Canadian dollars with the addition of Humble & Fume (CSE: HMBL) (OTC: HMBLF), which reports in Canadian dollars. On a combined basis, the Public Cannabis Company Revenue & Income Tracker includes 54 companies. We expect to add additional companies in the months ahead, and, due to pending or recently completed mergers, we anticipate some removals as well.

Since our last update, Tilray (TSX: TLRY) (NASDAQ: TLRY) and Turning Point Brands (NYSE: TPB) both reported financials. Tilray Q1 cannabis-related revenue, which included a full contribution from both legacy Tilray and from legacy Aphria, showed growth of 38% from a year ago. Adult-use cannabis sales were below expectations at $51 million. Adding the Q1 Aphria revenue from a year ago and the Q2 Tilray revenue suggests that the company saw a 6% year-over-year decline in contrast to 49% growth in the overall Canadian adult-use market. Turning Point Brands missed consensus expectations for its overall revenue, which was impacted by a sequential decline in its Zig-Zag segment sales. 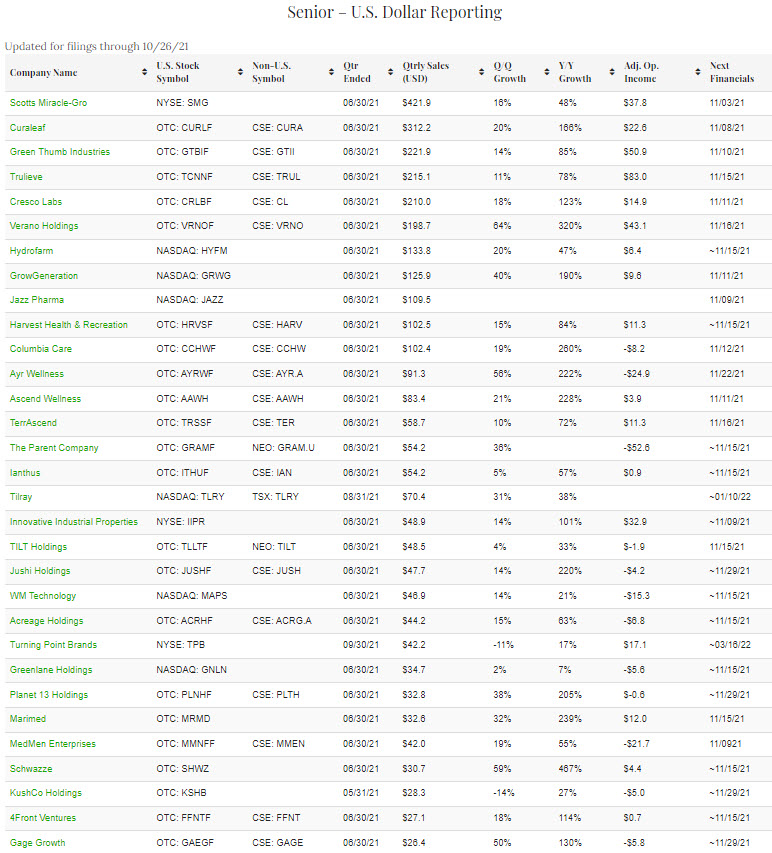 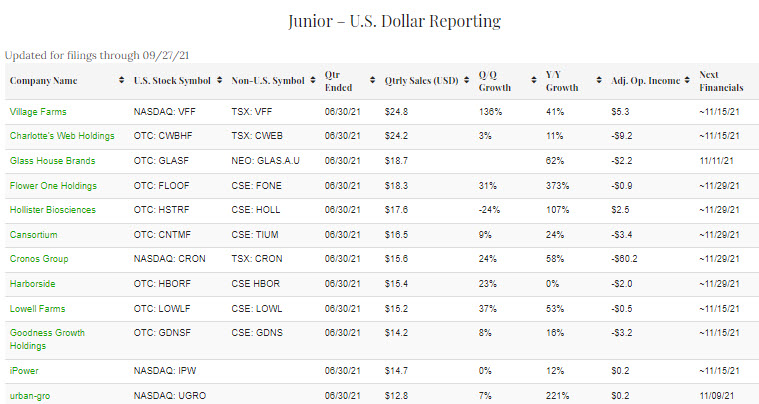 Looking to the first part of November, many of the largest American companies will be reporting financials, including Scotts Miracle-Gro (NYSE: SMG), Curaleaf (CSE: CURA) (OTC: CURLF), Green Thumb Industries (CSE: GTII) (OTC: GTBIF), Trulieve (CSE: TRUL) (OTC: TCNNF), Cresco Labs (CSE: CL) (OTC: CRLBF), Verano Holdings (CSE: VRNO) (OTC: VRNOF), Hydrofarm (NASDAQ: HYFM) and GrowGeneration (NASDAQ: GRWG), all of which reported revenue in excess of $125 million in Q2. According to Sentieo, Scotts Miracle-Gro overall revenue is expected to decline 23% from a year ago in its fiscal Q4 to $1.046 billion. The company will be providing guidance for fiscal 2022, and it shared its preliminary expectations in August that its Hawthorne Gardening Company sales should grow at least 10-20%. For all of fiscal 2021, the company suggested that the unit is expected to grow 40-50%, which would be $1.52-1.62 billion. With the year-to-date revenue of $1.095 billion, Hawthorne, then, should post Q4 revenue of $425-525 million. In Q4 of fiscal 2021, it reported revenue of $352 million, suggesting year-over-year growth of 21% to 49% compared to the 48% it reported in Q3.

Finally, both Hydrofarm and GrowGeneration have already pre-announced disappointing Q3 results. Hydrofarm has suggested that its revenue fell from Q2 to $121-124 million, a 27% increase roughly from a year ago “driven entirely by M&A growth.” GrowGeneration has indicated that revenue was $114-116 million, up 109% from a year ago at the mid-point but down from Q2 as well.

During October, HEXO Corp and Valens Company (TSX: VLNS) (OTC: VLNCF) reported financials. HEXO’s Q4 revenue was ahead of expectations due to a large shipment to Israel, but there was substantial deterioration in its operating profit. Its growth in adult-use sales during the quarter of  21% to C$29.8 million substantially trailed the 57% year-over-year growth in the overall Canadian market. Valens’ revenue advanced from the prior quarter and from a year ago but was short of prior expectations.