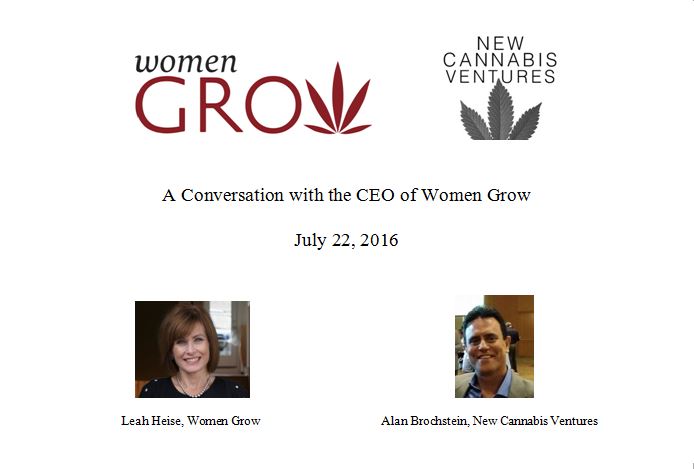 Women Grow, which launched two years ago, has rapidly become one of the most powerful cannabis industry organizations, providing networking opportunities in 40 cities in North America on a monthly basis and several national events. Founders Jazmin Hupp, CEO, and Jane West, National Events Director, recently moved into advisory roles as they brought in new leadership, naming Leah Heise as its CEO, effective July 1st. The press release introducing Heise shared some information about her background as a regulatory compliance lawyer and an applicant in Maryland’s medical cannabis program, but there is so much more to the story! I interviewed Leah on July 22nd (full audio below) to learn more about her and to discover how she plans to take the organization into its next phase.

Heise’s battle with a debilitating illness over many years sidetracked her from her legal career and introduced her to the idea of alternative medicines for pain relief instead of opiates just as Maryland was introducing its medical cannabis program.  She was able to relaunch her legal career focused on the cannabis industry and also applied in Maryland for cultivation, processing and dispensing licenses through Chesapeake Integrated Health Institute, LLC.

Leah became involved with Women Grow in late 2015, attending her first meeting in Baltimore before attending an event in Los Angeles.  She caught the attention of Jane West, and West convinced her to become on of several candidates for the CEO position. In addition to her experience in the cannabis industry and her engagement in the Baltimore chapter, the organization likely saw her prior involvement with network marketing company Arbonne International, where she was  Executive Regional VP, as a sign of a good fit.

Women Grow faces big growth ahead, with 400 pending applications for new local chapters. Heise is focused on revamping the way the national organization deals with the local chapters in terms of affiliate agreements.  Her goal is to make it feel as if there is just one organization, with better operations, training and support. She also intends to expand the membership program, which wasn’t part of the original business model. Heise said that Women Grow will continue to be run as a for-profit organization, but it may consider adding a 501(c)(4) advocacy arm in the near future.

You can learn more about Women Grow by visiting its website.  The next signature networking events taking place across the country will take place on August 4th. The next national event is a wellness retreat in Portland, Oregon in October.